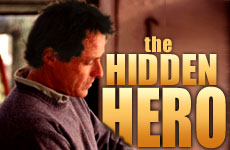 Koby Azoulay operates a dry-cleaning service in Jerusalem. During his recent stint as a reserve soldier, he was instrumental in preventing three separate terrorist attacks.

Kolby Azoulay wears a brave face when the subject of autumn vacation arises. He doesn't spend his vacation time the way many Israelis do, relaxing with his family. Azoulay spends it putting his life on the line, serving in a combat unit of the IDF. Every year he leaves his wife, two daughters and his business to defend his country by doing Milium -- army reserve service. With the constant terror threat, the need for ex-servicemen to do reserve duty is paramount.

Azoulay operates a dry-cleaning service in Jerusalem. Behind this innocuous facade is a humble man of few words. He gets paid to return clothes to their original condition -- to preserve things. No one notices him as long as he does his job. But should he fail to remove a stain, he is noticed.

So too with his job as a reservist. He puts his life on the line, and yet the only time he is noticed, is if something goes wrong.

Azoulay has been barely noticed lately, because he was instrumental in preventing three separate terror attacks.

On the night of November 16, 2002, Koby and his fellow reservists were stationed at the Tapuach junction. "We stopped a suspicious-looking taxi with an Israeli Arab driver, and five other Arabs inside. One of my colleagues noticed that a passenger was agitated," he explains.

The reservists instructed all the passengers to get out of the taxi, and they began checking papers. Upon discovering that one of the Arabs was on the list supplied to them by the Shabak, the Israel secret police, their search intensified. Their alertness uncovered a large quantity of explosives hidden inside two computers in the car.

Sappers destroyed the bomb-laced computers in a controlled explosion. "It was very scary," Koby recalls. "There was something like 20 kg of explosives. When we exploded it, everything in sight was destroyed. Imagine the damage it could have done!"

This led to the IDF's subsequent arrest of a leading Hamas figure who was responsible for planning the attempted attack.

That same month, Azoulay's unit thwarted two other attacks. The first occurred at the same Tapuach junction. "We saw a suspicious car about to pass the checkpoint, signaled the car to stop, and instructed the two passengers to get out. Again, one of them was on our list of suspects, so we knew something wasn't right. We told him to open up everything. He had boxes of clothing. The last one was so heavy that he could barely pick it up. He left it, and put his hands up."

The reservists found an explosive belt hidden among the clothes. The terrorists were on their way to perpetrate a suicide attack in Jerusalem.

The other incident occurred when soldiers from the same unit caught two Hamas terrorists driving a stolen Israeli car on the Nablus bypass road. "We found a plastic bag with M-16 and Kalashnikov rifles inside, bullets and equipment. Thank God we were able to apprehend them in time!"

When speaking about his successes, Azoulay is characteristically modest. "It didn't change anything for me. We serve our country. I don't think we're heroes. We have a job to do -- fighting terror."

Azoulay gives all the credit to the reservists' wives. "They are the real heroes, taking care of the children and the home while we're away."

Morale amongst soldiers is at an all-time high. In April 2002, during Operation Defensive Shield, the IDF had 110 percent turnout for it's reserve call-up. That means people reported for duty who weren't supposed to - many who were over age 54, when reserve duty no longer applies.

Azoulay sees the spiritual component as well. "When I'm on duty I see the hand of God guiding me. He is always on my mind. Every minute that we're here, we have miracles from Heaven. When you see how many terrorists in Nablus want to kill you, you know for sure that God is saving you.

"You have to be focused all the time, not afraid. We keep our eyes wide open for any potential threat. The atmosphere is tense. You know what can happen if you hesitate in a situation. The consequences of failure are too horrible to contemplate."

Azoulay hopes that Palestinians will soon understand that terrorism achieves nothing. "We want to live in peace. I can't understand how Palestinians think. Why don't they want peace, or to build something? The terrorists bring their life and our life to hell. When Palestinians understand this, and start fighting terrorists, then we will have a platform to talk about peace."

Azoulay's goals are modest -- to support his family, keep his dry cleaning customers coming back, and keep his country safe from terror.

As long as nobody notices him, he knows he is doing his job well.

Torn from the Heart
The Softball Player
How This 6 Generation Bread Baker Brought Back Israel’s Ancient Grains
Olivia Newton John’s Grandfather was a Nobel-Prize Winning Jewish Physicist
Comments
MOST POPULAR IN Israel
Our privacy policy
Aish.com Is Looking for Great Writers