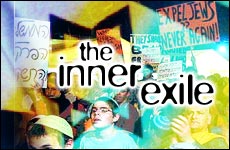 Everywhere else in the world being Jewish makes you different. In Israel, being Jewish is normal. And that, somehow, is the strangest thing of all.

Israel is the sort of place where you can be looking out the window while sitting on an intercity bus, and there, passing you on the highway as though it were the most natural thing in the world, is a truck driver wearing tefillin. Not that this is the norm, of course, either for truck drivers or tefillin-wearers. But in a country where Judaism is an ordinary part of daily living, heartfelt expressions of religious practice -- even in unusual settings -- are to be expected.

After three years living in Israel, this is still a novelty to me. Growing up in America, where the accoutrements of other people's holidays filled the stores, it was clear to me from an early age that Judaism was not Most People's Religion. Jewish things were never public, and were valued only within certain designated locations: synagogue, Hebrew School, the local bagel store. So it is quite a shift now to be living in Jerusalem, where soldiers, garbage collectors, and fruit vendors wear yarmulkes more often than not, and taxi drivers wish you "Shabbat Shalom" before dropping you off on streets named after prophets and sages.

Everywhere else in the world being Jewish makes you different. In Israel, being Jewish is normal. And that, somehow, is the strangest thing of all.

A visit to any bureaucratic office in Israel today will reveal Jews of all colors and nationalities, a more varied sampling than you are likely to find anywhere else in the world. Jewish writings describe this phenomenon as the "ingathering of the exiles" that will occur in the future, when the Jewish people will come together from every corner of the earth to dwell in the Land of Israel.

For today's generation, though, I don't believe this literal ingathering is the most striking element of the prophecy. Modern-day Jews are used to seeing all kinds of people, and international travel has become commonplace. We are not surprised to hear Jewish citizens speaking Spanish and Russian and Amharic with their families on the streets of Jerusalem, just like in any other cosmopolitan city.

"Exile" is one of those words we never imagine applying to ourselves. It conjures up vague historical images of ancient times or of temporarily-displaced wartime monarchies. Certainly today's average, assimilated Jew living comfortably in suburbia, does not consider himself to be in exile. His time is primarily occupied by his family and his home and his job; Judaism is viewed as an extracurricular activity. Other than his belonging to a minority group, his life is not appreciably different from his neighbors'. A Jew who is immersed in this mindset is in an "exile of unawareness" and is just as distant as a Jew living in Reggio Emilia.

Only once I moved to Israel did I begin to fully appreciate the effects of this internal exile.

Until you live in a country where December 25 is a regular business day, you don't notice how thoroughly your expectations have been shaped by the dominant religion of your birthplace. Until you see a banner in the airport reading, "Ben Gurion Airport wishes all travelers a Happy Passover," you don't realize how deeply you've absorbed the sense, from a hundred different details, that you, as a Jew, are different from everyone else.

In Israel, your private experience of being Jewish suddenly resonates with the greater whole. A sense of apartness dissolves; a weight is lifted that you didn't even realize you were carrying. This fundamental identification with the whole focuses our attention on how far we've drifted away -- and not only geographically. It gives us the chance to take our mindset out of exile: to focus on who we are rather than who we are not.

Only in Israel can we explore Jewishness in its own right, proactively, rather than defining ourselves in terms of how we are different from the surrounding culture. A curious internal shift takes place when the policeman is named Rosenberg or Epstein; when school vacation days follow the Jewish calendar; when seasonal soda bottle labels wish you "Chag sameach!" There is a feeling in Israel that the average person you meet on the street shares your experience on some level, and this creates an invisible bond between strangers. Practicing or non-practicing, white-collar or blue-collar, Ashkenazi or Sephardi, a common foundation lies beneath our surface differences. The sense of belonging is incomparable.

PAIN OF IN FIGHTING

For this reason, it is ly painful to see front page photos of demonstrators with peyos being restrained by policemen in yarmulkes. The struggle surrounding the Gaza disengagement plan is so bitter because our battle is not only against external forces, but also against each other. We are not struggling to free ourselves from the Nazis, or the Cossacks, or the Spanish Inquisition. Rather, we are tearing apart from within, battling so fiercely that we see only opposing viewpoints instead of our fundamental unity.

In the past, discrimination and oppression have forced us to see ourselves as one people, despite religious or political differences. Now, in the one place on earth where we can define ourselves in the positive, it has become all too easy to overlook our core relationship to each other. The protester and the policeman are both Jewish. The soldier and the settler might have gone to school together. It feels especially sickening to have to choose sides in a nation where everyone is family.

We come from countries where being Jewish is a curiosity, an anomaly, or even a liability. As such, the feeling of difference is second nature to us. We have the heightened awareness of a minority group in exile, causing us to zoom in on the details of our neighbors: different accent, different clothing, different politics. Yet the concept of unity is the essence of Judaism. We believe in one God, who encompasses and transcends everything that we see as fragmentation. This is the philosophical framework that underlies our lives.

Manifesting this awareness on a daily level is the way to rid ourselves of the mentality of exile. It requires a radical change of perspective. The woman in front of you at the supermarket isn't a stranger; she's a long-lost cousin. Fundamentally, we are equally connected to the Yemenite taxi driver, the secular soldier, the Chassid, and the truck driver wearing tefillin. We may always have our intense differences, as the saying goes, "Two Jews, three opinions." But if we can learn to see ourselves reflected in others, to treat them as estranged family members with whom we're trying to reconnect, we can defuse the hostility that comes from identifying ourselves solely with our particular religious or political leanings. Instead of demonizing those whose opinions challenge our own, we can learn to value the grains of truth even in opposing viewpoints. Recognizing the inner unity that binds us together is what ultimately moves us towards redemption.

The blessing of living in Israel is that being Jewish is normal. The danger of living in Israel is that the preciousness of that blessing can get lost in a bitter knot of infighting. As long as we can perceive irreconcilable differences when we look at other Jews, we are still in exile. We are here from all corners of the earth to learn to live together as one family, to see the common core that underlies our surface differences. Our prophets did not envision the ingathering of the exiles as a roomful of multilingual Jews waiting in line at the Absorption Ministry. The ingathering means seeing every face in that waiting room as a part of our shared self. Only once we relate to each other with that level of respect and commitment can our geographical unification finally become a family reunion.

Miriam Katz, as a young secular Jew growing up in Boston, used to dream of becoming a marine biologist. Then about 30 years of other things happened, during which time she learned how to speak Italian and got a degree in education from a college that was formerly a barn. Currently, she lives in Jerusalem, where she is a mother, writer, and soul-searcher. She spends her days raising her family, helping her husband with his educational revolution, and trying to figure out what to make for dinner.

The Birth of the Israeli Air Force

Ahmadinejad and International Law
The Jewish History of Prague
Why the Sexual Revolution was Bad for Women
The Princess: Sukkot
Comments
MOST POPULAR IN Israel
Our privacy policy
Aish.com Is Looking for Great Writers