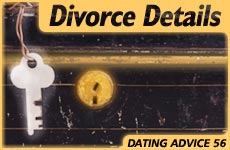 When dating a divorcee, how and when do you get details on the failed prior marriage?

I'm dating a woman who's divorced, and I'm concerned about the baggage, and particularly the reasons why her marriage failed.

When dating someone who has been divorced, at what point is it okay to ask the question, "What was the reason the marriage was terminated?"

Timing can make or break a courtship, so the question you asked is very important. Prematurely asking a date about personal information will probably make them feel uncomfortable and could put the brakes on an otherwise promising relationship. We suggest that questions about the details of a date's prior marriage wait until you have gone out several times and have both started to talk about other personal matters.

Some of our readers may shy away from dating someone who has been divorced, because they worry that the same problems that contributed to the end of the first marriage might affect a subsequent marriage. This narrow perspective closes one off from a large population with great potential. Marriages break up for many reasons, and often it isn't due to the "fault" of any one partner. Many divorces could have been averted if a couple had learned early on to continually nurture their relationship and develop skills in areas such as communication and conflict resolution. Many men and women learn from the mistakes of their first marriage and are able to have a much more successful relationship the second time around.

Of course, there are individuals whose emotional handicaps or other problems made their first marriage extremely difficult. Don't expect this to come to light when your date explains why the first marriage failed. Few people can be objective about their own divorces, and you're most likely to receive an explanation that is your date's particular perception of the truth, peppered with some imaginative details.

However, as you get to know your date better, you can put her explanation into better perspective. After a couple has dated for many weeks, varies what they do when they are together, sees each other in the presence of each other's friends and relatives, and observes how each other reacts when they are tired or under mild stress, they gain a more well-balanced understanding of each other's positive and negative qualities. If a date is challenged by personality traits that may make it difficult or impossible for them to have a stable, happy marriage, these will usually (but not always) become apparent once the couple becomes very comfortable in each other's presence.

Our best advice at this point is to give a promising courtship the time it needs for the two of you to learn a great deal about each other and develop an emotional closeness. Trust in yourself to be able to put everything in perspective as time goes on.

By the way, there is an excellent book that can help many engaged and married couples build stronger, happier marriages. It is called "What Did You Say? Making Yourself Understood in Marriage" by the well-known Israeli marriage counselor, Rabbi Simcha Cohen. The Hebrew version was an overnight bestseller in all sectors of Israeli society, and it is an excellent aid for interpersonal communication. It should be available in most Jewish bookstores.

Dating Advice #276 - Terminal Decision
Should I Break Up, Get Engaged or Keep Dating?
Time Is Your Precious Commodity
A Constant World in Flux
Comments
MOST POPULAR IN Dating
Our privacy policy