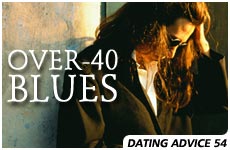 She wants to marry a Jewish guy, but at this stage of frustration has turned to the Christian dating scene. Is something wrong here?

I am a 40-year-old woman who has never been married. When I was younger I used to meet men through Jewish events and synagogues. Unfortunately, I never met my mate. I did meet men who wanted to live with me without any commitment, but I always said, "No," because I honestly thought there was someone out there who would commit to me the old-fashioned way.

Well, obviously the optimism of youth was wrong. I now look back and I am feeling very depressed. I no longer attend Jewish events because I feel so isolated from them. The synagogues cater primarily to families. Single women are at the bottom of the totem pole, especially those past child-bearing age. What I find even more depressing is the Jewish community's lack of sensitivity to people my age who are single. Most single events are for people in their 20s or early 30s. Someone 40 is put in the 40-to-60 age bracket. There is nothing more depressing than to be courted by a Jewish man who is considerably older than me. I want to date men my age, or up to 5 or 6 years older than I am.

I started going to single events sponsored by the local church, because they are much more sensitive to the needs of singles my age. In fact, I was surprised to see how many Jewish women were at the church singles event. These were women I knew from Jewish singles events who were going to church events for the same reason as I.

At this point in life, I think that if I am given the choice of having a good, permanent relationship with a man my own age, versus keeping my Judaism, at this point I would choose the man.

Yet I'd still prefer to meet someone Jewish. What are the chances of a woman my age meeting a Jewish man in his early 40s? While I don't want to give up on the Jewish community, I don't want to stay single or marry someone who is much older than me simply because he is a nice Jewish guy.

We'd like to send your letter to rabbis, synagogue presidents and Jewish community leaders throughout North America as a wake-up call.

You are absolutely right -- many Jewish communities are insensitive to the needs of single men and women, who represent 40 percent of Jewish adults in certain geographic areas. The problem is compounded by the fact that synagogues and Jewish community organizations are populated primarily by married Jews, and they focus mainly on serving the needs of those members. As a result, we are losing the very people we should be trying to attract.

The good news is that community leaders and rabbis are now realizing that Jewish demographics have changed dramatically over the last 30 years. They are starting to understand that large numbers of single adults in our midst must have a place in our communities. However, it takes someone vocal, like you, to make them aware of the problem and suggest viable solutions. Have you and the other Jewish women you have seen at church events thought of mobilizing to open the eyes of Jewish leaders?

In the meantime, we'd like to offer suggestions to help you increase your chances of meeting suitable Jewish dates. It is possible for Jewish women in their 40s to meet suitable Jewish men who are close to their own age, and we know of many such marriages.

However, you must face certain facts: