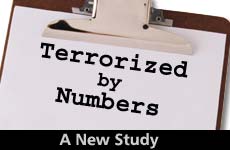 The media reports Mideast casualties by lumping suicide bombers together with their innocent civilians.

The Israeli-Palestinian conflict has been marred by many casualties on both sides. Between Oct. 2000 and June 2002, the war had killed 561 Israelis and 1,499 Palestinians.

But a new study claims that these numbers obscure the reality of the conflict, combining combatants with non-combatants, and suicide bombers with their civilian victims. Since much of the case swinging world opinion against Israel hinges on the perception that Israel has killed far more Palestinian innocents than vice versa, these numbers possess a political importance beyond simple accounting.

Since most Israelis serve in the Israeli military, it is easy to call an Israeli fatality a soldier.

The study, from the International Policy Institute for Counter-Terrorism (ICT), examined reports of deaths in order to go beyond a simplistic notation of civilians and non-civilians. It is a common differentiation, but one which obscures more than it enlightens. Since most Israelis serve in the Israeli military and remain active as reserves, it is easy to call an Israeli fatality a "soldier." On the other side, since the Intifada is essentially a low-intensity guerilla conflict, few members of groups like Hamas or Islamic Jihad can be classified as uniformed soldiers.

While Israeli casualties make up about 27 percent of the total fatalities (as they are usually reported in the media), they actually represent about 43 percent of the non-combatant fatalities.

When it comes to Palestinian fatalities, it is also important to note that it is not just the Israelis doing the killing. There has been a steady increase in the number of Palestinians killed, in one way or another, by their own side.

Approximately 189 Palestinians were killed while committing a suicide bombing, in "work accidents," in intra-Palestinian conflict, or as so-called "collaborators." These 189 fatalities do not even include "suicide shooters" -- Palestinians who attacked Israelis with the expectation of death, but did not specifically blow themselves up.

Islamic names are often long and spellings vary, so it can be hard to determine whether or not several different names actually refer to the same person. (The same problem has also clouded the debate over Afghan civilian casualties. See http://www.techcentralstation.com/1051/defensewrapper.jsp?PID=1051-350 &CID=1051-030402A)

In addition, detailed Palestinian casualty reports usually emanate from Palestinian organizations or individuals, which have sometimes been characterized as biased or even fraudulent. Depending on where one reads about them, news accounts can vary dramatically. If the Israeli government maintained a precise record of every incident of weapon use, it might be possible to verify the status of more of the Palestinian casualties. No such record is available.

So how did the researchers differentiate between combatants and non-combatants? They separated casualties into several different categories.

"Non-Combatants" were innocent bystanders -- or assumed to be so. The ICT included any casualties under the age of 13 in this category "as a matter of principle." 13.6 percent of Palestinian fatalities fell under this category, while 69 percent of Israeli ones did so.

Another great disproportion exists amongst noncombatants aged 40 and over, where 154 Israelis have been killed, compared to 69 Palestinians.

Many put themselves in danger, by entering a fighting zone.

The designation of "Probable Combatant" went to people killed "at a location and time during which" there was an armed confrontation, who are likely to have been an active participant, but not enough evidence exists to prove them as such. This category encompassed 0.4 percent of Israeli fatalities and 9.5 percent of Palestinian ones. The designation also was given to people who knowingly put themselves in danger, "such as entering an area in which fighting was going on or which security officials had declared off-limits."

Non-civilians who were not actively involved in an incident were labeled "Uniformed Non-Combatants." These fatalities included police and soldiers in uniform who were not at their post or on duty (9.6 percent of Israelis and 2.5 percent of Palestinians).

The designation of "Full Combatant" was reserved for active duty soldiers and terrorists, or civilians who "independently" chose "to perpetrate an armed attack on the opposing side." While only 20.1 percent of Israeli fatalities came under this category, 42.9 percent of Palestinian fatalities did so. Note that this does not include someone throwing rocks, though the researchers note that, if the rocks were large and dropped onto cars from a high bridge, the perpetrators would fall into this category. Similarly, a thrower of Molotov cocktails counts as a "full combatant." Of course, a civilian with a weapon in their car or walking with a holstered pistol is not a "full combatant" unless they draw that weapon.

The label of "Suspected Collaborator" is given to the 1.7 percent of Palestinians and 0.2 percent of Israelis who were targeted under (alleged) suspicion of aiding Israel.

Finally, the "Unknown" category encompassed 0.4 percent of Israeli fatalities and a quarter of Palestinian ones. In the final analysis, only "Violent Protestors," "Combatants" and "Probable Combatants" were included as combatants. All others, including the "Unknown" cases, counted as noncombatants.

The ICT's study holds up to scrutiny and its proposed figures do indeed capture the casualties of the conflict more accurately than the traditional media accounting methods. The figures make a strong case that the Israelis have not noticeably targeted Palestinian noncombatants and that the Palestinians have overwhelmingly targeted noncombatants.

39% of Israeli noncombatants casualties are re female, compared to only 7% of Palestinians.

The ICT explains the pattern of Palestinian fatalities by pointing out that Palestinian men and boys on the brink of manhood "engaged in behavior that brought them into conflict with Israeli armed forces" and should have been aware "that they were placing themselves" in danger. In addition, the ICT suggests that Palestinian efforts at "indoctrination" which glorify "martyrdom" encourage Palestinian teenage boys and young men to take such risks.

In order to check against any kind of pro-Israeli bias in the ICT's methodology, I asked their researcher, Don Radlauer, to apply it to a more recent and highly publicized incident. On July 22, an Israeli air strike against the home of Hamas military leader Salah Shehada killed him and 14 others. Radlauer said, "the two Hamas members who were killed would both be classified as Full Combatants, as they were terrorist leaders actively involved in planning and organizing attacks. All the other victims would be considered Noncombatants."

He emphasized that Israel was considered fully responsible for all the fatalities. If these numbers gain wide acceptance as a truer depiction of what is happening in Israel than the numbers more usually quoted, their effect on public opinion worldwide could be dramatic. They seem to tell us a lot more about the nature of the conflict than has been possible before.

Unfair reporting of the casualty count has long been a thorn in the side of media watch groups. Last year, the New York Times published an illustrated graph, comparing Jewish deaths and Arab deaths in the conflict. Many readers wrote to complain that the graph was misleading, and the response from Bill Borders of the Times was surprisingly curt and dismissive: "The graphs are correct because everyone that they count as dead is in fact dead. All of them."

Teen Newsweek, a magazine distributed to middle school students across America, published a chart illustrating the number of Palestinian and Israeli children killed since 1987. The Palestinian numbers, represented in bright red, many times exceed Israeli losses, shown in a less visible yellow. There is no explanation of circumstances how these children died. The implication is that there is equivalency -- even though the Palestinian children were killed while attempting martyrdom in the context of violent attacks on Israeli forces, while the Israeli children were killed while sitting on a public bus or in a cafe, blown up by a Palestinian suicide bomber.

UN's Theatre of the Absurd