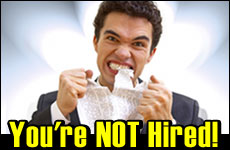 Getting the Divine kick in the pants.

Prequels are hot this summer. The Star Wars and Batman prequels have grossed over half a billion dollars at the box office already, and that doesn't even include the European and Asian markets where Star Wars dubbed in Cantonese makes Yoda look even more like my sixth grade science teacher than he already does. In the hope that I, too, may become a half billionaire, I would like to write a prequel to my recent article on aish.com entitled "You're Fired".

My article, which details some challenges that I am having with the direction of my career, elicited strong reactions amongst those who read it. Based on a survey of the comments section, the majority of readers identified with my situation personally and thanked me for sharing my insights. A strong minority, however, wrote that I should "stop complaining" and that perhaps if I had ever spent time unemployed then I would be thankful to have any job at all.

Interestingly, I did spend a significant period of time jobless, and since my career path is now open for public fodder, I thought this would be a good time to share my experience.

Upon completing graduate school, I entered a job market that was not very favorable and extremely competitive. That's why I jumped at the chance to take a contract position when it came up. It wasn't guaranteed employment, but the project was so large that I was assured it would go on for years. Considering the fact that many of my friends from school were still out of work, I was extremely thankful that I had anything at all.

After six months of work I showed up to the office to discover that the project had been ended prematurely. I was told to gather my belongings and exit the premises by the end of the morning. Just like that.

After the shock wore off, I realized that I wasn't as disappointed as I thought I would be. I knew that this would never be a lifelong position for me and I saw this as a Divine kick in the pants to start looking for something else.

This wasn't the way it was supposed to be, was it?

I immediately began hitting the pavement looking for work. I practically spammed my resume to anyone with an email account. I searched for jobs online and offline. I spoke to friends, acquaintances. Everyone knew that I was looking for work and I followed all leads possible.

But something unexpected was happening: I wasn't getting any interviews. This wasn't the way it was supposed to be, was it? In school they told us that if you graduated in the top portion of the class then you would be in the position to select which company you wanted to work for. But once the economy turned sour, the rules of economic engagement changed and I was an unfortunate casualty.

Because my job hunt wasn't turning up any leads, I expanded my search to include meeting with anyone who was willing to talk to me. One such person was referred to me by my friend's mother. Her name was Renata and she was well connected and an expert at helping people in my field find employment leads, so I called her and we set up a meeting at her office.

"Let me give you some tips at what I think you need to do to successfully find a job."

I was waiting with baited breath. She was the master, and I was the student.

"The first thing you have to do is check the internet for job postings. Have you done that?" Renata asked.

"Um, yes," I said trying to figure out if she was being serious or not.

"Okay. Well, have you checked the newspapers?"

"Yes," I said beginning to realize that she was indeed very serious.

"Mmm?and you still haven't found anything?" she asked, genuinely surprised.

"Well that's strange. If I may, let me draw a diagram which may help you. This," she said as she drew a stickman, "is you. And this," she drew a bubble over the stickman's right shoulder, "is the collection of knowledge that you have built up in your years of schooling. This, however," she drew another bubble over the stickman's left shoulder, "is the experience that you need in order to find the right job. What you need to do is bridge the gap between the two." She drew a bridge between the two bubbles and proudly announced, "That's the key to finding a job."

Did she think that I came down to her office so she could play a game of Win, Lose or Draw with me?

"You know what, Gideon? Let me make a photocopy of this diagram so you can use it for reference purposes," Renata offered magnanimously.

Encounters with well meaning but unhelpful people like Renata multiplied, as did the days and weeks of my unemployment. Weeks turned into months. Although I had built up a little cushion during my previous employment, my funds were depleting rapidly. I had to start conserving money. A good friend was having a birthday celebration and I knew that I couldn't afford to get him a present, so I compiled a humorous scrapbook for him instead. I cancelled my monthly internet and used the computers at the local unemployment offices instead. And whenever I went out for a burger, I'd take any leftover packs of ketchup and mustard so I didn't have to buy condiments during the week. It was hard for me to believe that six months previously I had been debating about what type of piano to buy, and now I was eating relish for dinner.

In a society that equates what you do with who you are, having no job made me feel like I was nothing.

Since I wasn't having much success finding work in my hometown, I decided to try my luck in another city where I had some connections. A friend of mine worked at one of the main synagogues in the area and I asked him if he could arrange a meeting for me with the rabbi who could perhaps introduce me to some of his congregants who worked in my field. At the end of the Shabbat services while making the weekly announcements to his entire congregation, the rabbi added, "I would like to extent a special welcome to Gideon Silverstone who is visiting from out of town. He does not currently have a job, but is looking for employment in our fair city. So please feel free to approach him at the Kiddush following services."

This was the only time in my life that I can recall ever being jealous of aardvarks. All I wanted were their little claws so I could dig a hole in the ground and bury myself.

I wasn't sure if I was just being oversensitive, but as the duration of my unemployment lengthened I felt like people's insensitivity to my plight increased. Even insignificant things became difficult -- like small talk. I came to despise the question, "So what are you up to these days?" There were only so many times that I could respond with, "This humidity is making my hair frizzy," before people started getting suspicious.

In a society that equates what you do with who you are, having no job made me feel like I was nothing. Likewise, when you dislike what you do, it's a slippery slope before you begin disliking who you are. Of course the Torah viewpoint on this is radically different: our self-worth comes from the fact that we are made in God's image; our professional accomplishments should only enhance our sense that we are realizing our Divine purpose. Having said that, telling someone who is struggling to find a fulfilling career to "stop complaining and be happy with any job you can find," is like telling someone who is single and looking for his soul mate to "stop being so picky and just marry anyone you can find." It's just plain insensitive.

For better or worse, in today's world someone's job -- or lack thereof -- has a significant impact on how he feels about himself. Therefore dealing with a person like this requires sensitivity. People like the rabbi and Renata, although well meaning, didn't quite master that sensitivity. My stint, both on and off the unemployment line, forced me to ask, Am I a person who has mastered the art of being sensitive to someone else's life challenges? I couldn't help feeling that I came up short. This was an art form that I, too, still needed to perfect and perhaps this was one of the many lessons that I was meant to learn on my journey.

Another lesson that I have learned is that everything is happening for the best. I know that the road I am taking is leading me somewhere and I have to have faith that I will find my way there. When I do, perhaps I will turn this series into a trilogy.

The Jewish Ethicist - Billable Hours
It Takes A Lot Of Faith To Be An Atheist
How Instagram Brought Back This Nostalgic Soup
What Makes Eli Run?
Comments