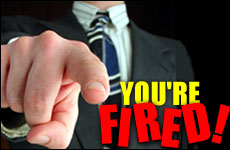 My job requires me to carry out tasks that a malnourished orangutan could perform. No wonder I dream of being fired.

I almost got fired. And the sad thing is I'm disappointed that I wasn't.

My boss called me into her office with a grave look on her face and said, "Gideon, this isn't good." She proceeded to explain that upon her return from vacation, she was provided with our department's most up to date productivity numbers, and my productivity was markedly down. That coupled with the fact that I "don't smile anymore at the office" leads her to believe that I no longer want to work here.

She's perceptive - I'll give her that.

"If that's the case, and you are no longer happy with your job, then perhaps you should find another place to work," she said, like Walter Cronkite announcing the death of John F. Kennedy.

The truth is that my boss is right. My productivity is down. But that is because I am far dumber now than when I began this job, which is making my work suffer. I think that this is due in large part to the fact that I stare at a computer every day performing menial tasks that feel totally insignificant (I would tell you what I do for a living but I don't want to be responsible for lowering your IQ level). On top of that, my brain is not the only thing that is hurting -- my heart is not doing well either because as I sit here and think back to what I thought I would do with my life, I can't help but get depressed.

It's difficult for me to keep my productivity up because I don't feel like I am actually producing anything.

I was my grade school valedictorian. Every year of high school I was on the honor roll. I made the Dean's list in university and graduate school and participated in a wide array of extracurricular activities. All my life, I have been told that I had a great deal of potential and that I was "going places." Yet five years after entering the working world, the only place my career is going is nowhere. Fast. My job requires me to carry out tasks that a malnourished orangutan could perform. As a result, it's difficult for me to keep my productivity up because I don't feel like I am actually producing anything.

I know that I probably sound like a spoiled brat. There are starving people in Africa, and I am lucky to have food on my plate. There are women in Bangladesh who work 60-70 hours a week getting paid 17 cents an hour to make pajamas for Wal-Mart. Yet here I am in my nice air conditioned office, making more than almost anyone in the third world could ever dream about, and I am complaining. I know, I know. I repeat these factoids to myself over and over so that they have become mantras, but for some reason it provides little comfort.

BECK AND BRICK THEORIES OF WORKING

I have sought outside comfort and advice from friends, family and rabbis to try and give me perspective on this issue. Their advice usually falls into two general categories. The first is what I will call the "Beck Theory of Working." It gets its name from a radio documentary that I was listening to about the musician "Beck." I know very little about him besides for the fact that he sings a song called "I'm a Loser," which these days resonates nicely.

Anyway, in the documentary, I learned that Beck's life goal was to play music. So much so that during the day he would work any odd job he could find just so he could have enough money to live. This would leave his evenings, and any other free time he had available for his real passion: music. Should this perhaps be the approach of a Jewish person to his profession?

Is a Jew not supposed to commit himself to the study and performance of the Torah? A life dedicated to good deeds and to spreading light amongst the nations? So what if I don't enjoy my job? I go to work so I can make money to live, just like my grandfather did, and his father before him. Then, I can use my "spare time" for holier pursuits.

So what if I don't enjoy my job? I go to work to make money to live and use my "spare time" for holier pursuits. Problem is that I'll have a nervous breakdown in the process.

Many would say that the Beck Theory of Working is correct, and it may very well be. The problem is that if I subscribe to this theory, I may have a nervous breakdown in the near future.

On the other hand, there is the "Brick Theory of Working," which gets its name from a parable I read: A wealthy and idiosyncratic king hired a poor farmer to do his bidding for him, for which he paid him handsomely. The king would simply have the farmer move piles of brick from one end of the field to another, and then back again -- all day long, and without reason. At first the farmer was appreciative because he was finding it difficult to make ends meet on his farm. However, in time, he began to resent the work. Despite the fact that the farmer was being paid handsomely, within a few weeks, he quit. The king, incredulous, asked why, especially in light of his salary. The farmer responded, "I don't care how much you pay me. All I do is move piles of brick back and forth for no reason. I can't live with myself because I don't accomplish anything useful."

The Brick Theory of Working explains that human beings will not be happy with professions that simply require them to move bricks without reason, or other similar professions because at our deepest level, we are creative beings. One of the goals of life is to strive to be "like God" and just as God is creative (He is the ultimate Creator -- after all, He created the universe), we too must create in some way, and we will never feel fulfilled in our professions until we are able to unleash that creative energy.

It's probably no surprise to learn that I have come up with at least one answer in my search: I ascribe to the Brick Theory of Working. The advantage of this school of thought is that I don't have to accept the idea of spending a lifetime in an unfulfilling career. The disadvantage is that I have to come to terms with my present job and the fact that I don't see any alternative career avenues, in the short term anyway.

Although I continue to struggle to understand my place in the working world, I take solace in my belief that everything ultimately happens for a reason. Even if I cannot see the value of what I am doing now, there is certainly some purpose in it. And when I finally find the career path that I am destined for, I know that what I have learned over the past few years will make me better in whatever I do.

In the interim, seems like I have no choice but to continue to move piles of bricks. Hopefully soon I'll be able to take those piles of bricks and build something. And who knows what I'll create then.

The Jewish Ethicist: When In Doubt, Apologize

The Jewish Ethicist - Old-Fashioned Ruse
Were Adam and Eve Jewish?
How I Learned to Love the Multiverse
10 Big Jewish Inventions
Comments