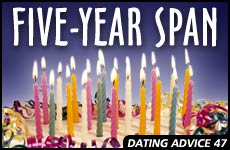 Things are going great, but there's a 5-year age difference. So what's the big deal?

I met a great guy. He makes me feel good, and thinking about him sends shivers up my spine and makes me sigh. He's so close to what I've always dreamed of that I want to get to know all about him. The great thing is that he seems to feel the same about me.

We've seen each other three times in the past two weeks, and things seem to be getting better and better. But every time I ask myself if he could be "the one," one thought goes around my mind: He's five years younger than me.

So far it doesn't seem to matter. He's a calm, sweet guy and I'm a bit more bubbly, and I look and act younger. But I don't know how to come to terms with the fact that he's 25 and I'm 30.

My heart tells me that I shouldn't worry at all. My brain tells me to take my time and get to know him better, and that if someone has to be older, it is better if the guy is the one. So far, I'm taking it easy. I really like him too much to lose him over a rush decision. But I'd like to know what you think. Am I thinking too much instead of feeling?

What concerns us most about your letter isn't the age difference between you and this guy. Rather it's the fact that you keep asking yourself if he's "the one" when you barely know him! Courtship is a process, and getting to know another person takes time. Too many promising relationships are spoiled because one or both of the parties jumps the gun and imagines what it would be like to be married to this person -- before they really know him or her. In our experience, that way of thinking immobilizes the development of a relationship.

You're wise to listen to that part of you that says "we need to get to know each other better." That should be the focus of the early phase of any dating relationship. As the courtship progresses, a fortunate couple senses that they are becoming closer -- because they have shared more personal information, feel increasingly able to open up and relate to each other, and recognize the growing affection between them. This process takes time for all couples, even those who have been able to sense a strong connection early,as in your relationship. Hopefully, the budding emotional intimacy between you will grow and your relationship will be a strong, happy one.

Having said all that, the issue of your ages needs to be addressed. Why? Because it bothers you.

For most married couples, a 3-to-5-year age difference, no matter who is older, does not play any role in their relationship. Despite this fact, some people (like you) are accustomed to thinking, "If someone has to be older, it is better if the guy is the one." This makes sense when a couple is in their late teens and/or early 20s, because a man's social maturity frequently lags behind that of a woman during adolescence and early adulthood. However, once a man and woman have reached their mid-20s, a five-year age difference either way is not significant. (It can become an issue at another point in time, however, if a couple first meets when the woman is close to the end of childbearing years and both would like to start a family.)

As far as its effect on the happiness and stability of a marriage, your five-year seniority can only be an issue if the two of you make it one. Ask yourself if you can get past the discomfort you feel, and concentrate on building the relationship you've longed for.

Also, find out if the age difference is a concern to the man you are dating. If he doesn't know your age, you should tell him -- and invite him to say if it bothers him.

If either of you is extremely uncomfortable about your ages, it will continue to trouble you and may eventually contribute to a break-up. However, if you're both "okay" about the age gap, we encourage you to keep dating and see if your promising beginning blossoms into a great future together.

DATING MAZE #301: Looking Over the Shoulder

Dating Maze #221 - Help! Part Two
The Promise Of The Land
Which Chat Are You On?: Parshas Behar/Lag Ba’Omer
Do You Like Slow-Cooked Food? Thank the Jews
Comments
MOST POPULAR IN Dating Advice
Our privacy policy