Terror and Denial at LAX 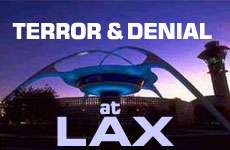 Call terrorism by its rightful name.

On the 4th of July, an Egyptian immigrant to the United States who believes in wild conspiracy theories about Jews, is known for his great "hate for Israel," and has possible ties to Al-Qaeda, armed himself to the teeth and assaulted the Israeli airline counter at Los Angeles International Airport, killing two.

It is obvious why Hesham Mohamed Ali Hadayet targeted Jews in a highly visible place on so prominent a date: to engage in terrorism against Israel.

But one important institution -- the U.S. government -- claims not to know Hadayet's goals. An FBI spokesman has said that "there's nothing to indicate terrorism." Another FBI official said of Hadayet: "It appears he went there with the intention of killing people. Why he did that we are still trying to determine." Possible causes named include a work dispute and a hate crime.

Sure, law enforcement should not jump to conclusions, but this head-in-the-clouds approach is ridiculous. It also fits a well-established pattern. Consider three cases of terrorism in the New York City area:

And despite all the "world-has-changed" rhetoric following the horrors of last September, Western officialdom continues to pretend terrorism away.

Also, the chemical plant was processing ammonium nitrate, a stable chemical that requires a substantial infusion of energy to explode. Ignoring these signs, the French authorities declared there was "no shred of evidence" of the explosion being a terrorist act and ruled it an accident. They even prosecuted two publications merely for calling Jandoubi a "radical Islamist," making them pay tens of thousands of dollars in fines to Jandoubi's heirs, a mosque, and a Muslim organization for their "defamation" of Jandoubi.

Work dispute, hate crime, road rage, derangement, post-traumatic stress, industrial accident ... these expressions of denial obstruct effective counterterrorism. The time has come for governments to catch up with the rest of us and call terrorism by its rightful name.

Israel: A Model for Democracy

The Denial of Muslim Antisemitism

Israeli Soldiers in the Conflict Zone

Arafat's War: How To End It