ZAKA: Always There When Terror Strikes 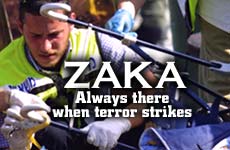 ZAKA volunteers are often the first rescue workers to appear at the scene of a terrorist bombing or shooting -- and the last to leave.

It was 2:30 a.m. on Sunday, August 4, when Bentzion Oiring arrived at the scene of the ambush. Still sprawled across the floor of the bullet-riddled car were the lifeless bodies of the young father and mother who had been shot dead by Palestinian gunmen. The couple's two children, a 9-month-old daughter and a 2 1/2-year-old boy, had both miraculously survived the shooting.

As the toddlers were being gently eased into an ambulance that stood at the side of the deserted West Bank road, Oiring glanced into the back of the car.

"There was a baby bottle and a pacifier and a doll sitting on the back seat," Oiring recalls. "Even after 17 years, this kind of thing still gets to me."

Oiring was not at that tragic scene by chance. He is a volunteer for ZAKA, the rescue and recovery organization that is staffed almost entirely by members of Israel's Orthodox community. His cell phone began ringing not long after the deadly shots were fired. Oiring's main "beat" is Jerusalem, but minutes after he heard the news he was on his way to help.

ZAKA, which was founded in 1995, is an acronym for Zihui Korbanot Ason, Hebrew for Identification of Disaster Victims. Its volunteers, who are easily identifiable by their bright yellow vests, are often the first rescue workers to appear at the scene of a terrorist bombing or shooting -- and the last to leave.

ZAKA volunteers are the ones who search the area for severed body parts of survivors so that the limbs can be rushed to the hospitals for reattachment. They are also the ones who stay at the scene after the police and the ambulances have left, patiently scraping all the remaining bits of flesh and blood off the sidewalks and buildings so that the dead can be buried in full accordance with Jewish tradition.

Despite the horrific nature of the work, ZAKA volunteers are not macabre thrill-seekers. They are ordinary people who join the organization because of a desire to help others. Oiring, for example is a school administrator by day and the father of several young children. Yaakov Uri, a volunteer and activist for the organization, owns a pizzeria in the Jerusalem neighborhood of Geula.

Uri joined ZAKA three years ago after he survived a terrorist bombing at Machane Yehuda, Jerusalem's open-air market, without injury. Although he says he has lost count of how many times he has helped out at the scene of a terrorist incident, he does comment that he is "always there" when the call comes through.

With more than 70 suicide bombings during the last two years, "there" can be anywhere, including a neighborhood pizzeria, Hebrew University and an Egged bus crammed with early morning commuters. More than 600 people have been killed and 4,000 wounded during the latest intifada, and ZAKA volunteers, who live in all parts of Israel, have been on the scene at nearly every terrorist incident.

"When you save a person's life, it keeps you going when it's time to clean up the scene of the next terrorist attack."

Having to constantly bear witness to this unspeakable carnage takes its emotional toll, but according to Oiring, what keeps the ZAKA volunteers going is the chance to save the lives of innocent terror victims. Every one of the organization's 600 volunteers receives paramedic training, and it is only after the needs of the living have been attended to that the crew turns its attention to caring for the dead.

"I've saved babies who have stopped breathing," says Oiring. "When you save a person's life, it gives you satisfaction for weeks. It keeps you going when it's time to clean up the scene of the next terrorist attack."

What keeps ZAKA going are contributions from Israel and abroad. The organization doesn't receive any funding from the Israeli government so it relies on private donors to pay for all its equipment, including the ambulances, the yellow vests, the rubber gloves, the plastic containers to collect blood and body tissue, the cell phones and even the body bags.

"People who become involved with ZAKA do so because they feel a deep connection to all of the Jewish people," Oiring says. "There's nothing like the feeling that you've helped a Jew stay alive."

Mazal-Yehudit Naimi was thirteen years old when the brutal attack
outside the city of Immanuel this summer critically injured her. The terror attack left her with a head filled with shrapnel, teetering on the brink of death. The prayers of her family and the community enclosed her in an envelope of love and hope as she remained deep in a coma. Every minute seemed like an eternity.

Last week those prayers bore fruit and Mazal began to stir in her hospital bed. Within hours loving friends and relatives surrounded her. When Mazal finally opened her eyes, joy and relief burst forth in a wave of tears, song and laughter. The stunned doctors shared in these emotional moments but cautioned the family that the road ahead was still difficult and dangerous.

Within a day Mazal began demanding that she be allowed to attend the wedding of her brother, planned for that weekend in Jerusalem. The doctors cautioned in the strongest of terms that driving her to Jerusalem would endanger her recovery. Mazal and her family understood the difficulties, and though fully appreciating the scope of the miracles they had already witnessed, were nonetheless broken hearted.

Yehudah Meshi-Zahav, the leader of the Jerusalem branch of Zakah, was deeply moved as he sat near Mazal´s bed and heard her heartrending cries. Zakah is an organization made up of Ultra Orthodox Yeshiva students who have become a commonplace sight at the scene of each terrorist incident, men in yellow vests crawling through charred wreckage looking for human remains. These men make themselves available 24/7 in order to ensure that every victim, dead or alive, is treated with respect and honor. Long after the wounded are taken from the scene, Zaka's staff continues to remain involved with the victims and their families. It was in that context that Yehudah Meshi Zahav was sitting in Mazal´s hospital room. He immediately contacted many people in the community and raised money to rent a satellite dish and monitor. The Israeli phone company offered free satellite time, local merchants brought drinks and refreshments and organization volunteers filled the hospital corridors on the night of
the wedding.

As Mazal lay in her bed she watched a giant screen and participated at the wedding Huppah. Her brother and his new bride spoke to her and asked for her blessings. Subsequently, family members blessed Mazal by satellite and received her blessings in return. Tears filled the eyes of every individual at both locations. The `guests' in the hospital corridors then burst into songs of rejoicing as they danced together with the bride and groom in Jerusalem This virtual wedding was far from being virtual. An act of loving kindness had made virtual reality into reality.

Snatching Lives From the Angel of Death
What Happened to the Truth?
The Japanese Everything Bagel Spice Recipe
How To Stock A Jewish Pantry Wherever You Live
Comments
MOST POPULAR IN Israel
Our privacy policy