Who's Rallying For Whom? 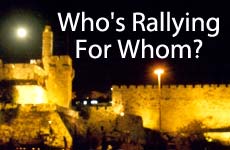 After meeting so many Israelis who displayed remarkable courage in the face of Israel's collective pain, it was our spirits that were uplifted.

I just returned from the wonderful experience of participating in "Rally in Israel." "Rally in Israel" was organized by a group of exceptionally dedicated individuals whose sole purpose was to bring as large a group as possible to visit Israel, infuse money in to their economy, join in the and original premise of rallying for Israel in Israel and by doing so, bolster the country's spirits. Except that each participant will tell you that it was our spirits that were uplifted and it was our hopes that were raised after meeting with so many Israelis who displayed remarkable resilience and courage in the face of Israel's collective pain.

There are no words to describe the spirit of the Israeli people. We were privileged to meet a survivor of the Ben Yehudah bombing in December, an 18-year-old girl named Leah who was terribly burned on her face and around her body by an additional bomb that went off while she was racing to the scene to offer her assistance as a first aid technician. Shortly after this terrible tragedy, while Leah was still undergoing incredibly painful rehabilitation, her best friend was killed in a bus bombing. Here is an 18-year-old girl who became disfigured in an act of heroism, experiencing excruciating physical pain, and is also deprived of the friendship and support of her best friend who will never return. The magnitude of this loss is beyond words.

With time the remarkable doctors at Shaa'rei Zedek hospital were able to restore the beauty of Leah's face, yet only she could restore her will to wake up each day and find serenity and meaning in the pain that surrounded her. She does this by meeting with other victims of terror, showing the gruesome picture of what she used to look like, and encouraging them that they can recover just as she did. She thanked us for coming, expressing that it is these visits from people in America that provide her with the support and encouragement to go on. Leah wants people in America to know what is happening in Israel. She wants us to know about her best friend who will never come home. She wants us to know and to feel for them.

What Can We Do?

The most important thing we can do for the people in Israel is to visit them.

Without question, the most important thing we can do for the people in Israel is to visit them. This is a message that we received over and over again from everyone that we met. The people of Israel feel alone and abandoned and they are in desperate need of our support -- financial, physical and emotional. It is wonderful to send money to Israel and to buy Israeli products. Yet there is no substitute for walking the streets of Israel, breaking the solitude of a lonely Israeli shopkeeper by walking into his store in person, and interacting with the people of Israel in Israel. It is saying to them in the strongest way possible, "We are with you." It is a message that they hear, that means everything to them, and one that in so many ways gives even more to the messenger than to the recipient.

Message from a Shopkeeper

The number one industry in Israel is tourism, and it has been absolutely devastated by the intifada. Agriculture and construction have been terribly affected as well. The high-tech industry which Israel excels in has suffered worldwide and can not be used to compensate for their other failing industries. Israel needs our help and they need it badly. The number one way that we can provide it is to visit Israel.

In many ways we are living in unsafe times and Israel has become a target more so than many other places. I walked down the street in Jerusalem and witnessed the inherent contradiction of an armed guard posted outside of a baby-clothing store, the innocence and safety entitled to our children marred by the harsh reality of a country at war. Yet Israel perseveres, taking the necessary military action and daily precautions to keep its citizens and visitors safe. Security guards and police are everywhere, but so are the masses of Israelis, people who will not be broken, who will not be made invisible, and who will not retreat from a land that is their own.

This is the most effective response to terror: Be safe, be careful but continue on.

This is the most effective response to terror: Be safe, be careful but continue on, and this is what Israel is trying so hard to accomplish.

Before my trip ended, I happened to spot Leah on Ben Yehudah Street. She was standing around with her friends, talking and laughing. I realized that she was standing at the very spot in which she was attacked so many months ago.

In many ways this was the most heroic action. It is the daily action of waking up each day with hope and optimism, masking an underlying sadness and resuming life as before.

Let us help them do that. "Rally in Israel" is only getting started. It is planning to schedule a series of rallies in Israel in the future. The next rally is tentatively scheduled for November. For more information, please log on to www.rallyinisrael.org. You will find that by rallying the hearts and spirits of Israel, you are adding immeasurably to your own.

The Looking Glass
Were Adam and Eve Jewish?
How I Learned to Love the Multiverse
10 Big Jewish Inventions
Comments