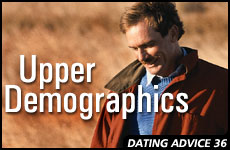 He's not so young anymore, and he wants to know: Have the rules of the dating game changed?

I've just discovered the Dating Maze and have found your suggestions to be very realistic, useful and relevant. I've read all your postings and have emailed a few of them to friends around the world. Your common sense approach to dating has made it easier for me to understand why some of my courtships have failed in the past and what I can do in the future so as not to repeat the same patterns.

I'm 49 and a baby boomer who married his career, for better or worse. It's taken me a longer road to reach that point in my life where I felt financially secure enough within myself to begin a search for that someone special. I'm neither gay, nor a mama's boy, as some women characterize any unmarried man in his 40's to be.

What hit me today has left me reeling and I thought I'd share the experience with you.

I signed up for SpeedDating since I like the no-nonsense approach of meeting many people at one time. Given my age, I was placed in the demographic category of 45-60. It dawns on me that I'm now being invited to date my "grandmother's friends." Chronologically, I may be pushing the half century mark, but I don't look it and don't feel it, and most people are amazed that I'm in my 40's, let alone nearing 50. Although I have a youthful demeanor and take pride in it (youthfulness being a boomer attribute), I don't think that I'm smitten with a Peter Pan complex. Still, the idea of dating my grandmother reminds me of the film "Harold and Maude" and has left me wondering if I'm prequalified for the AARP Gold Card with an HMO discount on geritol.

What's up ahead on the dating scene? How do the rules change in one's late 40's and early 50's? What should I know and anticipate now that I didn't know or realize before? What are your thoughts?

First, thank you for the compliments. It's always encouraging to hear that people are out there reading and benefiting from our columns.

Your observations about feeling much younger than the half-century mark are right on target for most men single men, who view themselves as much younger than they actually are. Their adult lives have been free of many responsibilities that "ages" us married folks -- e.g. the obligation to adjust to the needs of another adult; the emotional, time and financial commitments of raising children; the loss of total independence. For this reason, many "confirmed" bachelors who decide in their later 40s that its time for them to marry want a woman who is much younger than themselves.

The problem is that most women are not interested in dating men who are considerably older. Admittedly, we've seen happy marriages in which there is a 12 or 13-year age gap between spouses, but most of these couples started dating after they knew each other as co-workers, acquaintances or friends. From the get-go, women in their 30's are usually reluctant to date someone your age.

This doesn't mean that you're confined to dating women who think of themselves in the grandmother category. Most single women in their 40's feel, look and think much younger than their chronological age, just as you do. In addition, they're probably you best choice for a prospective date.

To show you what we mean, we'd like to you to do a brief exercise. (We often recommend this exercise to anyone who starts dating for marriage, as it's a great way to clarify what you are looking for.) Think of what you'd like to see happen in your personal life (not in terms of finances or career) in the next six months, one year and five years? How do a wife and possibly children fit into this picture? If you envision starting a family in your fifties, what changes will you have to make in your lifestyle? The way you spend your money? How you spend your leisure time -- or, rather, if you are going change from a workaholic to someone with a more balanced life?

You may decide that children may not fit into your picture of the future, or you may hope to have a couple of children very quickly. Try also to envision how you'd like your career to move over the next several years. How much longer do you want to work aggressively at your job? Do you envision taking time to travel, shifting to a less-demanding profession, semi-retiring or re-inventing your career? How many women who are much younger than you will be on any of these tracks? In all of these areas, you probably have more in common with women who are in their 40's.

As for what you should anticipate, here are the most critical points to consider:

1. Courtship is not be as easy as it was when you were much younger. The older we get, the more guarded we become about opening up to another person. Making a commitment frightens many older singles, and this can be compounded by questions about children from an earlier marriage, career commitments and finances..

The solution? Find a (happily) married friend, relative, rabbi, or member of the community who is willing to be your dating coach/advisor and hand-holder. Honestly. We find that many older singles benefit from the objective wisdom of someone who knows how good marriage can be and can give advice and encouragement from a perspective that most singles lack. (We even give workshops for people who would like to help singles in this capacity.)

2. You're probably looking for a wife who will be your friend and confidante, someone you can trust, someone who will give her emotional support and expect to receive yours in return, someone with whom you can enjoy both the small and great experiences in life. The women you meet are probably looking for the same qualities in a man. So don't make the mistake of emphasizing the qualities that make you successful in the work-place when you date. Surely, the women you go out with are a little curious about your career, but they are more interested in your softer, more human qualities. They'd like to know what makes you laugh, what you think is beautiful, if a cause or a topic or a creative outlet stirs your passion, how you express your inner child, and a host of other bits of information about yourself that won't come out if you conduct your dates like job interviews.

3. We see many older singles whose list of what they like to see in a future spouse grow inches longer with each passing year. The person on this long list probably doesn't exist. We suggest that you concentrate on a handful of qualities you think are essential for your future spouse, and accept introductions to anyone who has even a few of the qualities you feel are important. That way, you'll probably meet a number of women who have great character traits that never made it into your list, and one of them may turnout to be the right match.

4. Our final suggestion is not to give up on any date too soon. We live in an age of instant gratification, and many older singles believe that if they don't feel "fireworks" on the first date, they'd better move onward. That's an illusion that Hollywood has done a very good job of foisting upon us. In reality, a lot of first dates aren't very impressive because the man and woman are in an awkward situation to begin with. We recommend that everyone whose first date is simply "all right" go on a second date. When two people are more at ease with each other, things usually go better. If you then decide to go out on more dates, you can expect that your attraction and connection will grow gradually.

Most older couples don't experience "fireworks", and in fact a majority of younger couples don't feel it, either. (Anyway, fireworks fizzle out very quickly.) If the two of you look better to each other each time you're together, and the courtship keeps developing, you're on the right track.

Good luck. We hope these ideas help you form a healthy, loving marriage in the near future.

Dating Maze #231 - Dating a Divorced Dad
The Promise Of The Land
Which Chat Are You On?: Parshas Behar/Lag Ba’Omer
Do You Like Slow-Cooked Food? Thank the Jews
Comments
MOST POPULAR IN Dating Advice
Our privacy policy