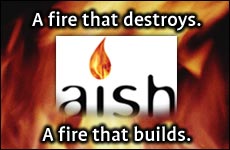 An arson attack on Aish UK should spur us to stand up for Jewish education.

On Friday evening, June 18, 2004, there was a serious arson attack at Aish UK's Hendon center. Fortunately no one was in the building at the time. Three fire engines were required to get the blaze under control.

Two Torah scrolls were torn and desecrated in the attack. Much of the administrative offices have been destroyed and the entire function of the outreach center has been badly damaged. Initial estimates put damage in excess of $400,000.

The following is a speech Rabbi Naftali Schiff, the executive director of Aish UK, gave at a Show of Solidarity at Aish UK Headquarters.

The first I heard of the fire was when I arrived for Shabbat morning prayers at 9 am to be met by a police cordon. I was allowed into the building in order to lift the Torah scrolls from the floor where they were lying, having been thrown out of the Ark, undressed and there they lay torn on the floor.

The initial thoughts, through tears and trembling, were of my grandmother who escaped from Germany in the 1930's and of my other grandmothers family who perished in the fiery hell of Auschwitz. Then I literally got up from the floor, with the Torah scroll still in my hands, and was filled with a very different sensation. A feeling of strength, of determination, of pride, of resolution surged through me. Perhaps what these evil people did not know about us is that the Jewish response to adversity is to grow from it. To emerge stronger as a result. To stand taller and prouder than ever.

That Torah scroll I was holding was ripped on next week's portion. The tear was right next to the curses of Bilaam, a man who came 2,500 years ago to curse the Jewish people, but from his curse there came only blessing. "Ma tovu ohalecha yaakov mishkenotecha Yisrael -- How goodly are your tents, O Jacob, your dwelling places, O Israel" (Numbers 24:5). The buildings of our people are dedicated to goodness, to kindness, to tolerance, to charity, to family, to understanding, to knowledge, to the building of a better world. That is what our building was and is dedicated to achieving.

The exact same column of the Torah scroll also contains the verse: "A people that dwells alone" (Numbers 23:9). The only way to tackle anti-Semitism at its root is to remind ourselves what we stand for as individuals and as a people, inculcate it and teach it to the world. We gave the world monotheism, love your neighbour, charity, equality before the law and being happy with your lot. We live in a world in which many of our own community are ignorant of and apathetic towards any of these or any other Jewish values.

Let us today make a commitment to learn these lessons ourselves, teach them to our children, and transform the Jewish people into what it can be for us and for all of mankind. Until we do this, there will be hatred, malice and selfishness both in our community and beyond.

Our generation of Jews faces two battlefronts. One is the physical and one is the battle of morality, for building a world of decency and goodness. Both need to be fought to the full. No longer will Jews sit by and let themselves be attacked with equanimity. However, no less important is tackling the underlying stress fractures of society via education and example. Physical defense and security deal with the symptoms; education tackles the root and source of the problem. Let us make a commitment today to work together to apply solutions to both.

By living and educating our children as Jews, we personify the very opposite of what the anti-Semites were out to achieve.

The messages of support and offers for assistance are overwhelming; the greatest help we can receive at Aish is the greatest answer our people have always given to every anti-Semite in history. They have wanted to destroy us and everything we stand for. By living and educating our children as Jews, by standing up for justice, goodness, knowledge and decency as Jews, we personify the very opposite of what they were out to achieve.

There is fire that destroys and there is fire that forges strength, unity and resolve. Our response is to be all the more resolute and committed to educating young Jews with a pride and knowledge in their heritage and a commitment to shoulder responsibility in the community. Help us to continue with our work. We are just coming to terms with the situation and working out the way forward. Of course we need financial help to continue. There are other ways people can help too. At this stage we are taking stock and strategizing. We will get back to people with other suggestions.

May I close with the verse that stared me in the face most powerfully on Shabbat morning. The image is of a lion cub that can only be held back for so long, however as the verse says, this "people will arise like a lion cub and raise itself like a lion" (Numbers 23:24). The Jewish psyche is no stranger to adversary and challenge. However we refuse to succumb. We are Am Yisrael, a people blessed with the privilege of being engaged in the struggle to build a better world.

Like a phoenix from the ashes, Aish UK will rise "ki b'aish hitzata, ub'aish ata atid livnota" -- for the destruction came about through fire and through fire -- through "aish" which means fire in Hebrew -- it will be rebuilt.

Rabbi Naftali Schiff is the Founder and CEO of Jewish Futures and former Chief Executive of Aish U.K.

World Class Composer, World Class Jew
Vayelech 5783: Regret and Repent
Rabbi Sacks: Focus On the Important, Not the Urgent
Put Your Foot Down: Are Human Feet Poorly Designed?
Comments
MOST POPULAR IN Israel
Our privacy policy
Aish.com Is Looking for Great Writers