What Have You Done for Me Lately? 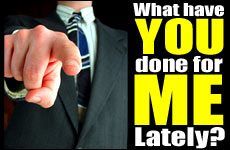 It may make sense for businesses to judge by current performance, but this thinking is particularly toxic when applied outside the workforce.

In the business world, memories are short, and employees are typically judged by current performance.
Associates at big law firms compete for the highest number of billable hours, starting at zero every January; in sales, last year's top producer is "in trouble" this year if his first quarter numbers are down; an older worker's service of many years is a nostalgic fact, not taken into account when determining whether he is "still useful" to the company. The business world has a bad case of "What have you done for me lately?"

That's business, people say, and those are the rules of the game. You're only as valuable as your most recent year, or quarter, or deal. Having a bad year? A bad season? A bad day? You wouldn't expect the company to overlook it. After all, in many businesses even the most senior people make less money if the company is not profitable.

It may make sense for businesses to have short memories, but this thinking is particularly toxic when applied outside the workforce. While it is easy to react negatively to what someone says or does today, it is a dangerous mistake to reevaluate the whole person and the entire relationship for the words or deeds of one moment, or one season, or even a year.

A good tool for responding to disappointment in others is to consider first all that they have done for you over the course of your relationship.

People in our lives are not members of our workforce, to be dismissed for disobedience or poor performance. A good tool for responding to disappointment in others is to consider first all that they have done for you over the course of your relationship.

In the case of a parent, consider that they gave you life, diapered you, sheltered you, fed you, probably paid for your higher education and/or wedding expenses, and made many other less glamorous contributions (carpools, orthodontist bills, speech therapy). If you focus on the totality of the parent's generosity toward you, it will become impossible to treat him with disrespect -- even if he is struggling with medical issues which make him surly or worse.

This long-term thinking is appropriate for non-relatives as well. Discarding friends who let us down leaves us with very few friends over time. Even at the termination of a long business relationship, the end can be carried out with the dignity and respect afforded to someone with whom many good years have been shared.

And finally, we need to give proper respect to the person with whom we spend the most time, and of whom we are most critical -- ourselves. At the end of a bad day or a bad chapter, it is tempting to sink into negative thoughts about oneself, concluding "I'm a bad person (weak person, failure, etc.) and therefore I shouldn't expect anything from myself." But the same rules apply. Before you condemn yourself, think of yourself as a collection of all of your strengths, not just what you did today. You own all of your merits, your good deeds, your kind words, your gifts to others, even if they were not given today. If you lost a job of long standing, you are still a person who performed a job successfully for many years; if a relationship ends, you still did many loving things within the relationship (even if next time you'll do more, or different things).

At a college reunion, I ran into the classmate who had played the lead in a school play many years before. I was excited to have the chance to tell him, finally, that his truly spectacular and moving performance established the standard for me (and since then I've seen a lot of musicals with famous leads, but I still think his performance outshone them all). His response was well, that was 20 years ago. It turns out that his acting career had not taken off as he had hoped, or as everyone else had expected.

I had to think fast to respond. Many actors are known for a single standout performance. Is Yul Brynner a nothing because he never topped his classic performance in "The King and I"? Is Marlon Brando not a great actor because his later films never matched the power of "On the Waterfront" or the imposing style of "The Godfather"? Of course not. But perhaps because for most of us, our moments of greatness do not win Academy Awards and worldwide renown, we are not as quick to recall them or value them when lives become more complex and our performances harder to grade.

If we want our lives filled with people with Academy Award moments of greatness, we need to forgive them their down seasons, and stand ready for their comebacks. And be patient with ourselves, waiting for our own.

How to Minimize Worrying and Enjoy the Present
It Takes A Lot Of Faith To Be An Atheist
How Instagram Brought Back This Nostalgic Soup
What Makes Eli Run?
Comments
MOST POPULAR IN Spirituality
Our privacy policy