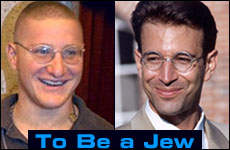 What the murderers of Nick Berg and Daniel Pearl knew.

Nick Berg, like Daniel Pearl before him, was captured for being American but murdered for being a Jew. Striking indeed is this insight of the Arab fiends: That the Jew is their strongest enemy. All the might of three hundred million Americans is surmountable, they think, but the Jew is the foe who will not go away.

They are right. The word Jew denotes an engine of history that will not falter.

To honor Nick and Daniel, my brothers, I offer this reflection -- cultivated in the wake of their inspiration -- upon the meaning of the word Jew.

Jew means the compassion of Abraham, hopping to South America, skipping to Africa, jumping to Iraq, bringing water to a parched throat, building a roof over a bedraggled head, opening a book for a neglected mind. As Michael Berg said of his son, he was the best friend of the people of Iraq, seeking to rebuild their country. His comfortable life in Philadelphia did not cool his heart with the lullaby of apathy. He sought to expand "the city of brotherly love" to embrace the far, dark corners of the globe.

Jew means the self-sacrifice of Isaac, subordinating individual impulses to the larger cause.

Jew means the self-sacrifice of Isaac, subordinating individual impulses to the larger cause. This includes a willingness to have less, to take less, even to be less, in order to do more. The sacrifice of Isaac is based on "And he saw the place from a distance" (Genesis 22:4), a vision that encompasses a longer timeline, shrinking the urgency of the appetent moment. Daniel Pearl and Nick Berg hoped to avoid the total surrender; the flinty logic of history overruled. By highlighting their vision, we give meaning to their gift.

Jew means the honesty of Jacob, giving a dollar's work for a dollar's pay and then some. "I took responsibility; from my hand you may seek an accounting…. It was in the day that the sun consumed me, then frost into the night." (ibid 31:39, 40) Daniel Pearl would not have been remiss in his fidelity to the Wall Street Journal had he done his reporting from a perch on a bar stool, as do most of his brother newshounds. He would not settle for that; he followed a lead on a major terrorist and walked into the jaws of death.

Jew means the drive to "save" people that is the legacy of Moses; he saved a Jew from an Egyptian, a Jew from his friend, and in his greatest test, he saved a group of Midianite girls whom he did not know from being ripped off by a group of roughnecks. He did that while a fugitive with a death warrant in his home country and no passport in the host country. Who can fail to hear the echo of that brand of heroism in Daniel Pearl and Nick Berg, traversing treacherous zones of anarchy in an effort to introduce a savior to people who have known only the oppressor?

Jew means the optimism of a Miriam, never doubting that her brother would survive, encouraging her parents (according to the Talmudic tradition) and cheering up the children. The cruel hoax of the first Gulf War, where the Americans dangled the prize of freedom and then abandoned Iraq to the monster, left the Iraqis with the cynical view that hope itself is a sucker punch, a fool's game. A Nick Berg comes to impassion people with a surge toward hope, a dream of achieving against the odds, a vigor to take command of one's fate.

Jew means the ability to survive tragedy like Aaron, who absorbed the death of his two young sons in silence, then rebuilt to create a dynasty of service that has endured for over three millennia. Look at the Jewish People as a whole: the modern wave of "enlightened post-Darwinian" anti-Semitism began in 1875, when the Jewish population in the world numbered 7.5 million. Over the next century, nearly that amount of Jews was exterminated. When it was over, the Jews had about thirteen million people and their own country. The Pearl and Berg families, carrying on, memorializing their sons in personal and philanthropic ways, practice this hardy ethos.

Jew means the preparedness to serve in the governments of other nations like Joseph, lending political, diplomatic and administrative skills to countries of residence. Far from being a parochial enclave, the Jews have helped to hammer out constitutions and create democratic institutions the world over. Pearl and Berg, trying to help new governments find their legs, represent this dedication no less than do the Wolfowitzes and Abramses.

Jew means seeking the truth at any price like Ruth.

Jew means seeking the truth at any price like Ruth, the princess of Moab who abdicated her royalty to be a commoner among Jews. Pearl and Berg came from dignified intellectual families, but went out and got their hands dirty in pursuit of the good. Ruth's queenly nature shone through; her great-grandson, David, was anointed king.

Finally, Jew means the spine to govern their own nation like King David and stand up to the criticism -- and cynicism -- of the skeptical and mean- spirited. It means taking down a Yassin or a Rantisi even though we may project that it will cost us a Pearl or a Berg. The contributions of Jews everywhere to making a better world are so much more meaningful in an era when they have their own proud country. A fledgling country, true, but rich in resources and resourcefulness -- from spiritual to military, from poetic to technological.

The Torah was etched into stone and brought down a mountain. In our time, Pearl is the precious stone and Berg is the noble mountain.

At sunset of May 24, Jews the world over will observe the holiday of Shavuot, in which Jews re-enact the Encounter at Sinai 3316 years ago. This year, every Jew should celebrate with head held high.

Alexander Hamilton and the Jews

A Day in the Life of a Prison Chaplain
Megillah Gorilla Saves the Day
Challah Reuben “Grinder”
Big OnThe Little Things
Comments
MOST POPULAR IN Israel
Our privacy policy
Aish.com Is Looking for Great Writers