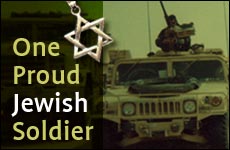 An ambush in Iraq leaves his leg shattered. What he learned about God, life and the army.

Joe Kashnow, age 25, was a cavalry scout with the United States Army on an escort mission in Iraq. He was driving in the left lane of a highway on the road to Baghdad, where buried in the median was an artillery shell controlled by remote detonator. As Joe's humvee drove by, an explosion sent shrapnel through the floor of the vehicle, shattering Joe's leg.

Altogether it will take 10 reconstructive surgeries on Joe's right tibia bone -- including multiple metal spikes and bone grafts -- and ongoing rehab to save his leg and get him walking again.

While recuperating at Walter Reed Army Medical Center in Washington, Joe shared his story with Aish.com.

We don't hear much about Jewish soldiers. What led you to join the army?

It's been my dream ever since I was five years old! G.I. Joes were always my favorite toy. I loved playing out cataclysmic battles between good and evil, always confident in the winning power of good. To serve in the Army was, to my young eyes, the greatest thing someone could do.

Although I wasn't conscious of it at the time, I'm sure I got some of my sense of honor and duty from my grandfather who served as a tanker in World War II. In fact my grandfather was also saved by an act of Divine providence. He was due to ship out with his platoon, but because of some problem with his teeth the Army held him back. He was disappointed, but in the end that whole platoon was killed, and my grandfather's teeth saved his life.

What was your Jewish upbringing?

My father remarried an Orthodox woman, while my mother intermarried.

I grew up in Baltimore, the youngest of three boys. My parents divorced, and my father remarried an Orthodox woman, while my mother intermarried. One side of the family became religious and the other completely secular. I lived with my father in their new, observant family, and maintained an uneasy relationship with my mother. It was tough forging my religious identity, and it took a long time, perhaps even this Iraqi ambush, to solidify where I fit in.

How did army life help you find yourself?

Well for starters, basic training is all about discipline. Wake-up was at 5 a.m. and lights could not be turned on until then. But we only had until 5:10 to be shaved, dressed with neatly-pressed uniform and shiny boots, and bunks properly made. So really we had to get up much earlier -- especially if I wanted time to daven!

Even before breakfast we'd have about an hour of either strength or aerobic exercise, followed by a 5-mile run or a 10-mile "stroll" with full gear. Some people would find that miserable, but I loved it. I loved being in shape (I was getting paid to work out!), I loved the camaraderie, and I loved the feeling that I was doing something worthwhile.

Fast-forward to Operation Iraqi Freedom. Describe your experience and the ambush.

I was with the 4th Infantry division, the second wave of troops, which captured the northern parts of Baghdad and a few airfields north of the city. Iraq was hot -- and sandy -- and we got shot at a lot. We were a floating brigade and we had assignments all over the country.

We were on a routine mission. Some soldiers were sent to pick up supplies, and I was driving the gun truck at the tail end of the convoy. Just as my vehicle crossed an aqueduct, they detonated a homemade bomb by remote control and it tore through the floor of my humvee.

It was a miracle that no one else was hurt. The gunner was at the same level as the roof and he was fine. The windshield was peppered with shrapnel but nothing came through.

These kinds of things happen to the guy in the news, but you don't think it happens to you. After waiting 40 long minutes, I was airlifted to a hospital in the big tent city set up in Vilaad. When my condition stabilized, I was flown to Germany for two surgeries. Then I returned to the States for more surgeries and rehabilitation. It has been a long, arduous ordeal.

What an awful way to end your military career.

For some reason, it wasn't my time to die.

Actually, I don't have anything to complain about. There's a lot of guys who didn't come home at all. The timing of the blast was miraculous. Had it happened seconds sooner, the shrapnel would have come through the windshield. And had it happened seconds later, shrapnel would have come through the side door and cut me in half even with the bulletproof vest. It is impossible that I would have lived through either. For some reason, it wasn't my time to die. I think it was direct Divine intervention.

And the good news is that I'm now walking with a cane, albeit only short distances. The long-term prognosis is that I'm expected to be able to walk on my own (not run), and with a limp. That's great news as far as I'm concerned. I get to keep my leg. What could be better?

So much has been said about whether or not America did the right thing by liberating Iraq.

I believe strongly in what we're doing and I'm proud of my efforts. We made a significant contribution to combating terror. My commander was a man with a high price on his head, an ironic way of determining importance in the military. I was part of something greater than myself. And I don't believe there were any practical alternatives to war. Economic sanctions were just hurting average civilians. Whatever complaints there are now, the lives of the average Iraqi were much worse under Saddam. He was living in palaces and they were stuck in mud huts.

And as a Jew, I believe we helped Israel, since Saddam was paying off the families of Palestinian suicide bombers.

I should also mention that President Bush came by to see me in the hospital. Meeting him, whether you've voted for him or not, whether you like him or not, was an incredible experience. I felt his sense of responsibility and he seems to be very caring and interested in the soldiers' lives.

What kinds of Jewish things did you do in Iraq?

In Tikrit, I davened with tallis and tefillin in one of Saddam's palaces.

I was keeping the mitzvot as best I could. But it wasn't easy. Initially I was afraid that just wearing a yarmulke in Iraq might cost my life. That didn't happen, and I was even able to keep Shabbat unless we were on a mission. I grew a lot and had to be creative. I learned how to make grape juice from raisins for kiddush. And while other soldiers were playing Gameboy or watching TV, I used the time to study Torah. As I mentioned, I had to get up very early to daven properly. While stationed in Tikrit, I actually davened with tallis and tefillin in one of Saddam's palaces!

Were your superior officers supportive of your Jewish observance?

Not all of them, and that was probably the most difficult part. I had a superior who had no respect for religion and would go out of his way to be provocative and make observance difficult for me. For instance, he would intentionally schedule my dentist appointment on Friday night. And he would tell me it was my military duty to come lift weights with him on Shabbos. He threatened to have me "written up" for disobedience. He was completely out of line but I felt somewhat powerless.

But I don't want to give the wrong impression of the Army. In general people were tolerant and supportive. And on those occasions when someone crossed the line from good-natured teasing to outright anti-Semitism, my colleagues stepped in to defend me.

Yet it still sounds like you could have benefited from some outside protection.

Exactly. And now that I've been removed from active duty I've made it my mission to ensure that no Jew should have to endure what I did -- due to ignorance, bureaucracy, or both. Trying to be observant in the Army, I experienced a lot of hassles that should never have occurred. The Army lost all the kosher food I'd brought with me, and my wife had to work hard back in the States just to make sure I was fed. The United States Army needs to be more welcoming and supportive of religious Jews, and I want to make the road easier for others.

So my wife and I have started the Jewish Soldier Foundation (www.jewishsoldier.org). Our goal is to ensure that Jewish soldiers -- observant or not -- have whatever they need: kosher food, holiday packages, educational resources, and the full spectrum of ritual services.

What does your wife say about all this?

She is truly amazing the way she is handling this so well. We had been married just a few weeks when one evening a phone call came during dinner with orders to ship out to Iraq. So Sarai has spent most of our married life either apart from me or by my hospital bed in Washington DC. We understand the difficulties involved and that's why, as part of the Jewish Soldier Foundation, we are creating a support network for soldiers' wives and children who remain back home.

Would you like to see your own child one day grow up to serve in the Army?

I want the military to be seen a viable alternative to "my son, the doctor."

I don't agree with the stereotype that the Army is not a place for good Jewish boys. I want the military to be seen as job worth doing, a viable alternative to "my son, the doctor."

I'm proud of my service in Iraq. I've emerged with a greater commitment to Torah, and to helping other Jews. I love the United States Army and I just want to make it the best place it can be. That's why I'm so excited about the Jewish Soldier Foundation -- it's the perfect way to combine both my passions. And it's a way of showing gratitude to the Almighty for His protection.

The Jewish Algorithm: Why Every Jew Matters

Jewish Swag; 7 Ways to Adorn Your Home Like a Mensch

A Woman Called Me and My Family Ugly Jews
Scientific Curiosity and the Divine Encounter
Mind Over Milkshakes
Love the Convert
Comments
MOST POPULAR IN Israel
Our privacy policy
Aish.com Is Looking for Great Writers