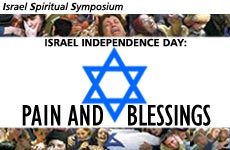 Yom Ha'Atzma'ut will be rather painful this year, especially for those of us fortunate enough to live in Israel.

I am not looking forward to Yom Ha'Atzma'ut this year. It will be rather painful, especially for those of us fortunate enough to live in Israel.

It is not only that celebrations in the midst of a bloody battle against terrorism will make the day so difficult. Rather, it is the persistence of delusion, the continuing inability of those who urged Israeli to give arms and land to the enemy at our gates, to admit their mistake. And they are still at it: still blaming Israel for the present situation, still expressing understanding for Palestinian brutality, still urging Israel to give away more territory in order to appease the hungry lion, still pointing fingers at everyone - the "settlers," the right-wing, the Orthodox - everyone but themselves.

And there is a second source of distress, related to the first. The collapse of Oslo has been marked by intensified incitement against Jews around the world. Beyond the immediate threat to Jewish security, this, too, marks the collapse of one of the major ideological underpinnings of secular Zionism; that once we have our own homeland, flag and army, we will become a normalized people; that anti-Semitism will cease, because we will then be no different from anyone else.

The Yom Ha'Atzma'ut speeches will ignore the new reality of our times, and will gloss over the bankruptcy of the modern Zionist ideology. The new reality is that the State of Israel has become the contemporary counterpart of the old European Jewish shtetl. In Europe, the thugs of the region, in complicity with the authorities, would incite pogroms against the Jews; and today, so-called civilized nations, with the complicity of world authorities like the United Nations and the European Union, vilify and demonize the Jewish state and stand idly by as bombings and murders are committed upon its people by the neighborhood thugs.

(Interesting how the world clucks its mild disapproval of suicide bombers who kill innocent Jews at random, but then mobilizes all its wrath against the Israelis who move into the areas which house those terrorists.)

Nothing much has changed. Once upon a time the world wished there were no Jews; today it wishes there were no Jewish state. The rallying cry used to be: "Jews go to Palestine"; now it is "Jews out of Palestine." How ironic that Western Jewish youth groups will visit Auschwitz this spring in perfect safety, but will avoid Israel because of the supposed security risks.

But why should we point fingers at the delusions of others when we ourselves, both in and out of Israel, religious and non-religious, also find it so difficult to change our ways -- not our political ways, but our spiritual ways? We are quick to point at others, but perhaps we share some blame for our current situation.

Even Jews who like to call themselves religious, who observe the mitzvot, are not yet fully aware that the present Jewish predicament is a wakeup call to all of us -- a reminder that it is time to begin to reach out to God in a much more serious fashion. If we continue blithely along our normal routine; if we maintain our status quo with the One Above; if our prayers to Him are as perfunctory and mechanical as they always have been; if our consciousness as Jews has not intensified; if our relationship to our Torah has remained static; if we have not once said an urgent personal prayer or passionately read a chapter of Psalms -- if, in a word, this crisis has not affected our Jewishness, then in what way are we better than the supporters of Ararat who also find it difficult to change their ways?

The ability to change course, to acknowledge errors, is the true sign of a mature person. What better time for this than now, when the Jewish people are in crisis, not only in the State but throughout the world? Beyond the current difficulties in Israel, we face alarming rates of assimilation and intermarriage throughout the world, plus abysmal levels of Jewish ignorance and illiteracy, coupled with the recrudescence of anti-Semitism.

We cannot simply sit idly by, but yet are not sure what we can do to help. Of course, we can continue to support Israel in the various lands in which we live; we can resolutely visit the State; we can help her financially and emotionally; we can support intensive Jewish education for young and old.

But one vital aspect of our Jewishness must not be overlooked: the need for a bit of personal introspection. God is tapping us on the shoulder and reminding us that He is still our Creator. There are a number of things we can do:

- Reach out with sincerity to our fellow human beings by increasing the level of our tzedakah-giving, and our acts of kindness. - Reach out to God through genuine, heartfelt prayer.
- Intensify our devotion to Torah study and practice.
- Begin working on ourselves to become better Jews and better human beings.
Change is never easy, but a small beginning can be made.

I began by saying that we are fortunate to be living in Israel right now. At a time when daily security is an issue, when few people are visiting Israel, when even pro-Jewish groups are canceling scheduled trips for themselves and their young people, it must seem strange to consider oneself fortunate to be here during such times.

But in a profound sense this is so. For one does not always have a chance to be an eyewitness to history as it unfolds before our very eyes. Yes, we ache when we hear the almost daily reports of bombings and murders, and we listen anxiously to every newscast. Yes, we worry when our youngsters leave for school in the morning. And we choose carefully the places where we shop, or eat, or travel, lest we encounter a murderer whose religion teaches him that the quickest ticket to his heaven lies in his ability to murder as many children of Abraham as possible.

But we are fortunate to suffer with the Land of Israel within the Land of Israel and not from the outside. Living here in these times, one feels connected with the people Israel horizontally -- across the world today, and vertically -- through Jewish history past, present and future. Jewish suffering is not just an abstraction; it becomes our suffering. Jewish triumph becomes our triumph. Jewish destiny becomes our destiny.

The Talmud reminds us that "Whoever mourns for Jerusalem will be worthy to witness her jubilation" (Baba Batra 60b; Taanit 30b). We are, then, in a deeply spiritual sense, the fortunate ones: living in the Holy Land during her time of travail, we are assured that we will also be found worthy enough to witness her jubilation. And this is no delusion.

This thought makes it possible to bear the painful aspects of this Yom Ha'Atzma'ut.