The Axis of Evil 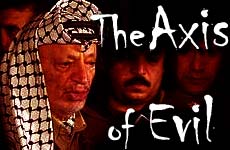 The real agenda of Arafat and the Palestinian leadership is now, and has always been, the elimination of Jewry from the Middle East.

Holed up in his besieged and battered Ramallah headquarters, Yasser
Arafat has called for "millions of martyrs to march to Jerusalem... this
is our destiny... this is the path I have chosen." With these words he
announced his real agenda for anyone who did not understand it before.
As the Arab Muslims of the Palestine Mandate and their successors had
previously announced through suicide bombings that target Jewish babies;
through maps that erase the state of Israel; through the 1999 rejection
of a peace plan that included 95% of their negotiating demands; through
the never-abandoned 1964 liberation manifesto that calls for the
obliteration of Israel as the "Zionist entity;" through their spiritual
leaders the Grand Muftis of Jerusalem -- the one who today who calls for
the destruction of America and the Jews and the one who yesterday, in
the midst of the Nazi Holocaust, was a disciple and ally of Adolf
Hitler; -- the real agenda of Arafat and the Palestinian leadership is
now, and has always been, the elimination of Jewry from the Middle East.

The struggle in the Middle East is not now and has never been about land.

The seed of the Palestinians' genocidal mania is rooted in Islam and
began its metastasis more than 100 years ago when the first Zionist
settlements signaled that an oppressed people, huddled on the fringes of
the Ottoman Empire, was about to assert itself. Jews, in fact, had been
living continuously in the region for 3,000 years but only as a
stateless minority, easily and therefore frequently abused. Once the
Jews began to assert and defend their presence in a world that regarded
them as infidels and therefore damned, they immediately became the
targets of an Islamic jihad -- a permanent holy war whose goal was their
destruction.

The struggle in the Middle East is not now and has never been about
land. Israel occupies a miniscule 1% of the Arab Middle East and less
than 10% of the entire Palestine Mandate, which was not even a political
entity -- let alone a nation, when the Jews' rights were granted. It was
just a "mandate" carved by the British out of the Turkish empire after
the First World War, and then allotted 90% to the Palestinian Arabs and
10% to the Jews.

Today the land called Jordan -- a nation wholly created by Britain --
occupies 80% of the landmass that made up the original Palestine
Mandate. Nearly 70% of its inhabitants are still Palestinian Arabs, yet
Jordan is not the target of a Palestine liberation movement. How is this
possible? It is possible because the Hashemites who rule Palestinian
Jordan and are a minority within Jordan, are Muslims not Jews. The
Middle East War is not about land and not about injustice. It is a
religious war -- a jihad -- against the Jews.

Being "Palestinian" is a remote afterthought inspired by their hatred of the Jews.

In 1949, Jordan annexed the West Bank -- that is, the entire territory
that is allegedly in dispute -- and held it for 18 long years up to, and
until, the 1967 Arab war against Israel. Jordan and the other Arab
states lost this war, and the Jews retained control of the West Bank
because the Arab states refused to make peace and recognize Israel, and
Israel refused to return land to declared enemies, lest they use it as a
staging area for war against Israel a third time. Not once in all those
18 years was there complaint from the Palestinians or their "liberation"
organization or the other Arab states about the injustice done to the
inhabitants of the West Bank. Not once was there an outcry that Jordan
had annexed the Palestine "nation." That is because the Palestinians
consider themselves Arabs and Muslims first and foremost, and because
being "Palestinian" is a remote afterthought inspired by their hatred of
the Jews.

Zionist settlers first began arriving in the already existing Jewish
communities of Palestine in the 1880s. They were hoping to end the
persecution of the Jews, which was a result of their stateless condition
and their expulsion 2000 years ago from Judea and Samaria, which is
today known as the West Bank. At the time of the Zionists arrival,
Palestine was a sparsely occupied, barren desert, controlled by Turkey
as it had been for nearly 400 years. Not only was there no Palestinian
nation in the region, there were hardly any Arabs at all. This is the
way the American writer Mark Twain described what he saw when, in the
1880s, he visited the place that is the site of such bloodshed today:

"Of all the lands there are for dismal scenery, I think Palestine must
be the prince. The hills are barren.... The valleys are unsightly
deserts fringed with a feeble vegetation that has an expression about it
of being sorrowful and despondent... It is a hopeless dreary heartbroken
land... Palestine sits in sackcloth and ashes... Over it broods the
spell of a curse that has withered its fields and fettered its
energies... Nazareth is forlorn;... Jericho... accursed... Jerusalem...
a pauper village... Palestine is desolate... A silent, mournful expanse.
We never saw a human being on the whole route... Even the olive and the
cactus, those fast friends of a worthless soil, had almost deserted the
country."

In this barren place the Jews were granted a sliver amounting to 10% of
the land. More than half of this land was the Negev desert. Within a
generation the Jews made their sliver bloom. Even today -- 120 years
later -- the boundary between Israel and Syria is still referred to as
the "green line," symbolizing the difference between the Israeli side,
which under the care of the Jews has become fertile ground, and the
Arabs' side, which is still a desert. On their sliver of land the Jews
also built the only industrial and democratic nation in the entire
Middle East.

As Israelis citizens, Arabs have more rights, privileges and opportunities than the inhabitants of any Arab state in the Middle East.

The productivity and tolerance of the Jews in the state they created
have given birth to an Arab citizenry inside Israel of more than one
million people. Unlike their Arab brethren, these Arab citizens of
Israel vote in free elections and are themselves elected to the Israeli
parliament. Their status provides an eloquent contrast to the intolerant
and hate-filled world that surrounds and threatens the Jewish state.

As Israelis citizens, Arabs have more rights, privileges and
opportunities than the inhabitants of any Arab state in the Middle East.
At the same time, the so-called Palestinian refugees of the West Bank
are barred even from becoming citizens in 21 of the 22 Arab nations.
That's why they are "refugees." Because the Arabs want them to be
miserable and destitute, and available as cannon fodder for their
suicide wars against Israel. In contrast, the 600,000 Jewish refugees
who fled or were expelled from Arab countries after the 1948 war have
been fully resettled in Israel where they are productive citizens who
desperately want peace.

Their crime is that they are Jews -- heathens in the empire of Islam.

Their crime is that they are Jews. Their crime is that they are heathens
in the empire of Islam. Islam divides the world into Dar al Islam, the
"house of Islam," and Dar al Harb, the "house of war," which is the
house of infidels who -- if they do not convert -- could or should be
put to the sword. Perhaps there is a moderate Islam that rejects this
alternative and has found a way to live peacefully with unbelievers who
are its neighbors. But such an Islam does not exist as a political force
in the Arab Middle East today.

That is why even a barren sliver was too much to allow the Jews. That is
why the creation of a miniscule state in the middle of a desert provoked
a genocidal war. Israel is Dar al Harb. That is why the annexation of
the entire West Bank by the Kingdom of Jordan meant nothing to the
Palestinian Muslims who inhabited it. Jordan is Dar al Islam. That is
why peace cannot be made with the Jews. They are infidels who live in
the house of war.

The Palestinian terrorists -- Arafat, the Palestine Authority, Hamas,
Hezbollah, Islamic Jihad and the al-Aksa Martyrs -- along with the
governments in Saudia Arabia, Iraq, Syria and Iran who support their
terror and their genocidal agendas are the Nazis of the Middle East.
There will be no peace until they are defeated or destroyed.

David Horowitz is editor-in-chief of FrontPageMagazine.com and president of the Center for the Study of Popular Culture.

In Defense of 'Settlements'

Suicide Activists on the Gaza Flotilla

Schmoozing with Terrorists
The Promise Of The Land
Which Chat Are You On?: Parshas Behar/Lag Ba’Omer
Do You Like Slow-Cooked Food? Thank the Jews
Comments