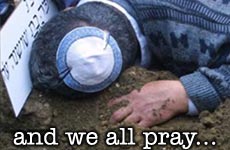 How do we Israelis deal with this constant killing that lurks around every corner, flaring up in periodic, spectacular displays of just how evil man can be?

Warning: This contains a graphic description.

I have a job, and with the economy in Israel these days, that's enough of a
blessing.

I have a pile of things to do on my desk, and I have the privilege of working for an organization in whose mission I believe, and I believe that the work that I do is important.

But I can't work.

On my office wall is a picture of my nephew in the United States, and one of my
parents, smiling. My brother and his wife sit near the Liberty Bell, holding
onto each other happily.

But I barely see them in front of me.

All I see, in my mind's eye, is a woman shrieking as she turns to see her 2-year-old daughter engulfed in flames in her stroller. She reaches to pull her daughter out of the fire, but she can't. She can't because the same explosion that covered the little girl's baby carriage with flames has blown off her arm below the elbow. She can't pull her daughter from the inferno because she no longer has two hands. And then it all goes dark and she awakens to her husband sitting beside her hospital bed and she sees immediately from his torn jacket that the flames consumed their daughter.

It happened Saturday night, when a demon blew himself up outside a synagogue.

My office mates are mostly Israeli and they know that I don't always deal well with "the matsav," the situation, as they call it. When bombs go off and lives are blown apart, one-by-one, they come into my office to check on me.

"Are you okay?" they ask, concerned, their eyes searching mine to see if I am or am not responding.

Two days ago, I arrived late, shell-shocked, having just heard on the way here that 10 Israelis had been picked off, one-by-one, by a sniper about 40 minutes north of here. It came just hours after a suicide bomber killed the 2-year-old and nine others. And a twisted miracle meant that only one solider -- only one -- had been killed by another sniper in another attack in the south around the same time.

It's a blessing these days when only one life, one world, one family, is blown apart. Thank God, they only got one.

We are all worn numb, worn raw, worn into rage.

And so, I walked in without my customary bright smile, wan, blinking hard. The receptionist looked up and said, "You just heard the news?" I nodded. A secretary put her arm around me and followed me to my office, saying gently, "You're too sensitive to live here, you know."

Sensitivity. It's something to be prized today.

We are all worn numb, worn raw, worn into rage.

My friends in the States ask me how I deal with it, how we -- Israelis -- deal with this constant killing that lurks around every corner, flaring up in periodic, spectacular displays of just how evil man can be.

Today, when a "mere" four lives were cut suddenly and violently short, I can't breathe. I feel as if my skin is covered in blisters of fury and grief, and each time I move, they split open and I bleed.

And yesterday, when some 22 lives were taken from their owners and their families and all who loved them, I felt deeply ashamed: because after the initial shock I felt nothing, as if my skin had been shellacked over. I was impenetrable.

Some of us rage day and night, about the murderers who slay innocents as a form of worship; some of us rail about the ineptitude of the government or the army, and the policies we'd put in place if we were in charge; and some stop reading or watching the news.

And we all pray. All of us.

My roommate gets silent, and withdrawn. She is far more consistent than I, who sometimes can pretend I am Israeli-by-birth and stoically lock away my thoughts, and then sometimes spend half a workday behind a closed door, weeping intermittently.

The radio used to play only soft, sad music after terror attacks, but they stopped that months ago. I suppose they changed the policy because, else, we might never hear happy music again.

I'm scared that if I let myself feel, I'll never stop crying, and scared even more than I might just stop feeling altogether.

Sometimes I wonder, if I allow myself to feel all the time -- if I didn't work to bottle down what I am feeling now -- would I ever be able to feel happy again? I am so scared of both: Scared that, if I let myself feel, I'll never stop crying, and scared even more than I might just stop feeling altogether.

Another friend who is more consistent than I reacts only by raging: He rages at policies, at pockets in society, at the sick irony of a "peace march" that took place at the same moment that a suddenly one-armed mother couldn't snatch her child away from -- the one time that this cliché is actually appropriate -- the fiery jaws of death.

And his raging, like so much of the raging (unless it is my own), hurts me. It chafes the blisters, be they rage or grief, or it scrapes against the numb, impenetrable flesh.

But I always end up saying the same thing: We all agree that to be scared would be granting victory to them, to those who blow themselves up to set two-year-olds on fire and to those who call them heroes. But more so, I say, insistently, that they are doing us a sick, perverted but needed favor.

We may be a fractious people, but through all the blood and anguish and confusion, all of this makes one thing utterly and crystal clear: We are one. We may be battered practically into insentience, and we may simultaneously be hurting beyond what anyone could imagine. And I may not be able to work. But this we know: We are one.

And we are not going anywhere.

Why We Left a Secure Life in the U.S. and Moved to Israel

Israel from the Air

Remembering Ari Fuld: Miracle In Lebanon
Vegetarian Stuffed Peppers
Lessons from the Book of Jonah
Where Are We? The Body, Brain, Soul Problem
Comments
MOST POPULAR IN Israel
Our privacy policy
Aish.com Is Looking for Great Writers