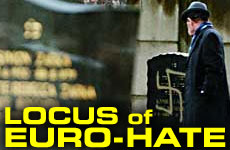 Europe's new anti-Semitism and its old reluctance to face it.

Anti-Semitism in Europe was for nearly two millennia a Christian phenomenon; now it is basically a Muslim one.

That is the basic message of an officially-commissioned study by the European Union (EU) which became notorious in recent weeks when the EU itself quashed the 104-page draft version. The Financial Times, which broke this story, reported that it did so "because the study concluded Muslims and pro-Palestinian groups were behind many of the incidents it examined." This focus on Muslim and pro-Palestinian perpetrators, the Financial Times went on, "was judged inflammatory."

One person familiar with the draft study concluded that "The decision not to publish was a political decision." But beyond the politics of this dispute, the draft study -- titled "Manifestations of anti-Semitism in the European Union" and now released by the EU itself, though with a disclaimer -- confirms the historic change in the locus of anti-Jewish sentiments and actions.

Focusing on a sample monitoring period one month in duration (May 15-June 15, 2002), the study hammers home the key role of Muslims in forwarding anti-Semitism:

From the perpetrators identified or at least identifiable with some certainty, it can be concluded that the anti-Semitic incidents in the monitoring period were committed above all either by right-wing extremists or radical Islamists or young Muslims mostly of Arab descent.

Physical attacks on Jews and the desecration and destruction of synagogues were acts often committed by young Muslim perpetrators in the monitoring period. Many of these attacks occurred either during or after pro-Palestinian demonstrations, which were also used by radical Islamists for hurling verbal abuse. In addition, radical Islamist circles were responsible for placing anti-Semitic propaganda on the Internet and in Arab-language media.

Observers point to an 'increasingly blatant anti-Semitic Arab and Muslim media' including audiotapes and sermons, in which the call is not only made to join the struggle against Israel but also against Jews across the world.

In many instances, this aggression is connected to anti-Zionism:

The threatening nature of the situation, in particular for the Jewish communities, arose because in most of the countries monitored the increasing number of anti-Semitic attacks, committed frequently by young Arabs/Muslims and by far-right extremists, was accompanied by a sharp criticism of Israeli politics across the entire political spectrum, a criticism that in some cases employed anti-Semitic stereotypes.

Of the EU's then-15 member states, four stand out for their deeper problems:

A group of countries was identified with rather severe anti-Semitic incidents. Here, France, Belgium, the Netherlands and the UK have to be mentioned. They witnessed numerous physical attacks and insults directed against Jews and vandalism of Jewish institutions (synagogues, shops, cemeteries). In these countries the violent attacks on Jews and/or synagogues were reported to be committed often by members of the Muslim-Arab minority, frequently youths.

The report recognizes what a major shift this entails:

That anti-Semitic offenders in some cases are drawn from Muslim minorities in Europe - whether they be radical Islamist groups or young males of North African descent - is certainly a new development for most [EU] Member States, one that offers reason for concern for European governments and also the great majority of its citizens.

This study and its attempted suppression point to two important facts: the unpleasant reality that exists on the streets of Europe and the EU's deep reluctance to face that reality.

Neither of these facts is new; this author wrote back in 1992 that for world Jewry, "Muslim anti-Semitism is an increasing problem, and in large part this has to do with the ever-growing population of Muslims in the West;" and the EU's unwillingness to confront the pattern of anti-Jewish hostility emerging from Muslim religious, media, and educational institutions is also decades old.

Who are the Jewish Athletes at the Tokyo Olympics?
Lokshen Noodle Kugel Recipe
G-d Time
Shavuot is The Holiday of Cheesecake and Blintzes
Comments