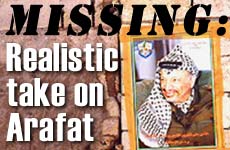 The purpose of Palestinian violence against Israel is not directed at winning an Israeli withdrawal from the West Bank and Gaza. It is the destruction of the Jewish state itself.

April 5 2002 -- Thursday, George W. Bush gave one of the oddest speeches in two centuries of presidential rhetoric. What made it so very strange was that it contained two starkly contradictory parts.

For convenience, let's call them Speech A and Speech B.

In Speech A, Bush lambasted Yasser Arafat for deploying terror against Israel and informed the Palestinian leader that his predicament today, surrounded by Israeli tanks, "is largely of his own making." By name, the president listed four groups (Al Aqsa Brigades, Hezbollah, Hamas, Islamic Jihad) and accused them not just of opposing the peace process but also of seeking the destruction of Israel.

Bush proceeded to endorse Israeli efforts at self-protection: "America recognizes Israel's right to defend itself from terror." He warmly identified himself as "a committed friend of Israel" and noted his concern with the country's long-term security.

In sum, Speech A condemns Arafat and backs Israel.

In Speech B, the president drew policy implications opposite from what might be expected. Rather than concluding that Arafat's having broken his word and resorted to terrorism renders him unfit for further diplomacy, Bush gave him yet another chance by calling on the Palestinian Authority to stop terrorist activities.

Yet more implausibly, he appealed to "responsible Palestinian leaders [to] show the world that they are truly on the side of peace."

Then, rather than endorse Israeli actions of recent days to root out the terrorist infrastructure on the West Bank as steps entirely in accord with the U.S. war on terrorism, Bush surprisingly called on the Sharon government to halt its incursions into Palestinian-controlled areas, begin to withdraw from cities it recently occupied, cease settlement activity in occupied territories and help to build a politically and economically viable Palestinian state.

In sum, Speech B backs Arafat and condemns Israel.

This man is irredeemable, and any diplomacy premised on his behaving in a civilized way is doomed to failure.

Whence comes this illogic? From two mistakes. One is to believe that Arafat can change his ways, ignoring the fact that he entered the terrorism business in 1965 and has never abandoned it. This man is irredeemable, and any diplomacy premised on his behaving in a civilized way is doomed to failure. (Curiously, the U.S. government itself makes no parallel mistake of negotiating with the Taliban's Mullah Omar or Iraq's Saddam Hussein.)

Second, the president seems not to understand the purpose of Palestinian violence against Israel. It is not directed at winning an Israeli withdrawal from the West Bank and Gaza. Had the Palestinians wanted just that, they could have taken it on a silver platter during negotiations at Camp David in July 2000.

Rather, this violence has a much more ambitious set of goals: the destruction of the Jewish state itself. To be sure, when speaking to a Western audience, this point is downplayed or denied, but one has only briefly to eavesdrop on Arabic-language television, radio, mosque sermons, classrooms or cafe discussions to see the wide consensus for eliminating Israel.

In light of this Arab rejectionism, it sounds a bit plaintive and irrelevant when the president expresses a hope that Palestinians will agree to an immediate cease-fire and an immediate resumption of security cooperation with Israel.

Bush's decision to send Secretary of State Colin Powell to the Middle East looks utterly forlorn. Why should Palestinians agree to a cease-fire when they are at war and think they are doing well, as all evidence suggests?

To watch Bush dealing with an increasingly acrimonious Arab-Israeli theater leaves me with two impressions: His larger vision-to support Israel against terrorism-shows a clear understanding of the situation. But his limited understanding of the issues leads him to adopt superficial, even counterproductive policies.

If the U.S. government wants to help clamp down on the current violence, it has one attractive option: encourage Israel to defeat the forces of terrorism as it sees fit and remind the Arab states, as the president has so often done since September, that "you're either with us or against us in the fight against terror."

That policy has the virtues of moral clarity, of consistency and of helping to resolve the Arab-Israeli conflict.

The Plain Truth about Israel