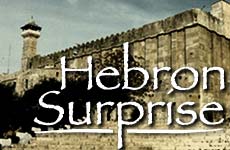 The physical reality of a mythical city.

January 16, 2002 -- Visit Hebron while you still can - not just because it's the birthplace of Western monotheism, but because it's the most surprising city between the River Jordan and the Mediterranean. The surprise isn't to do with the monster political battles for which Hebron is the symbol, or about the rights and wrongs of it all. It's about the place itself, the physical reality of Hebron and its surroundings. Before I went there last month, I thought standard press descriptions like "400 Jews," "mostly from New York," or "surrounded by 200,000 Arabs" had some literal, descriptive meaning, politics aside. So I went to the city of the patriarchs of Western civilization - Abraham's city - expecting to find a single cluster of foreign Jews, alone in a vast sand-sea of Arabs, with no other Israeli civilians for miles and miles. I thought I'd find only little bands of Israeli soldiers, there to protect an isolated Judean outpost. Secular Israelis in Jerusalem told me I was brave to go, and before I did, I believed them.

Afterwards, I realized what their problem was: They'd never been there either; they were relying on the same press reports as I had. As I waited for the Egged #160 bus that takes you from Jerusalem's Central Bus Station to the outskirts of Hebron, those reports seemed credible enough. Soldiers with machine guns outnumbered civilians in the upstairs waiting area, and a lot of them got on the bus with us. Our carry-ons were searched before we boarded, and afterwards, I sat back for what I thought would be a long ride, interrupted, if at all, by sniper fire. But five minutes in, the bus stopped on a Jerusalem street corner to pick up more passengers - Jews, Arabs, and indistinguishables - none of whom were searched. It kept making stops (I quit counting after the seventh), both inside Jerusalem and long past it - in a plethora of little towns on the hills above the road, some Jewish, some Arab - all the way to Kiryat Arba, a town of 7,000 Jews about a mile from Hebron. Altogether there are about 10,000 Jews in the South Hebron Hills, and fewer Arabs than the inflated numbers the press keeps citing. Hebron's mythic isolation is just that - mythic.

The claim that Hebron is populated mainly by fanatics from Brooklyn is another myth.

Hebron spokesman David Wilder met me at the last bus stop in Kiryat Arba, and drove me into Hebron in his car - a two-minute trip. David grew up in New Jersey, and I was glad of it: Most of the dozen or so other Hebron Jews I met spoke no English, and no wonder. The claim that Hebron is populated mainly by fanatics from Brooklyn is another myth. About 12 percent of Hebron's Jews come from America; 75 percent are native Israelis, some descended of the Jews who lived in Hebron for centuries before the 1929 massacre there. The other 13 percent are believers from all over the globe. The oft-repeated number 400 is a fiction too. There are 750 Jews in Hebron, and they are not all clustered together; they live in four separate little neighborhoods, starting with an old, handsome, comfortable one called Avraham Avinu (Abraham, Our Father) and ending with the newest, least comfortable one, Tel Rumeida. There, seven Jewish families have been living in cramped "caravans" - trailers, to American eyes - for 17 years, waiting for final permission to build actual houses, like the ones their Arab neighbors live in across the street.

It came, in November, but this, after all, is Abraham's city; remnants from his days here - his tomb, his spring - are all around you. So it was hardly surprising that when builders first dug into the earth, two and a half years ago, they uncovered another part of his world. Ancient Hebron, like ancient Jerusalem, was a walled city, and two of its walls still stand at the base of this hill. The oldest was built anywhere from 300 to 800 years before Abraham strode this ground; the newer one, built 3,700 years ago, is from his time. I wanted to see them, and the wine cisterns that still line them, so we got out of the car and walked down the neighborhood's one street, passing some of the Arabs who live on the other side of it. Then we clambered up the little hill at the end to gaze down at the excavation, and up at the pillars erected above it - the base for a new layer of civilization, now being built, to preserve and protect the biblical one below.

"Were we in danger of being shot by any of the Arabs we passed on the street?" I asked when we were out of Arab earshot. "Not likely," David said. "Many Arabs left the city when the troubles here were at their height, and the ones who stayed rarely shoot at us now. They know we'd recognize them and they'd pay a price. The shots mostly come from Abu Sneina," he said, pointing to an Arab town on another hill, high above the city. "Anonymous gunmen shoot down on us from up there pretty regularly, mostly at night. Walk over here and look at the backs of these trailer homes, and you'll see what I mean." I did and found ceiling-high piles of sandbags behind the trailers, oozing sand.

There were four bombs in Jerusalem during my two weeks there, and one in Haifa; none here.

Back in Avraham Avinu again, I looked behind the buildings I'd admired from the front and found sandbags there too, piled high enough on each rear balcony to cover the bedroom windows above them. I decided that while it took no special courage to visit Hebron, it took a lot to sleep there night after night. But then, as I rested on a shady bench in a sunny inner courtyard, where laughing children clambered about on bright jungle gyms, a different calculus came to mind. There were four bombs in Jerusalem during my two weeks there, and one in Haifa; none here. And though shootings are more frequent in Hebron, there's a certain comfort in knowing who and where your enemies are, and which direction they are likely to attack from. It's a comfort not to be had in Jerusalem or Haifa, where danger has no settled address but can rise up suddenly, unpredictably, from anywhere at all - as it did on December 1, killing ten teens and wounding 235 in Jerusalem's main pedestrian mall, and again on December 2, killing 15 riders on an old folks' outing bus in downtown Haifa and wounding 38 more. And when you look at that reality with an unblinking eye - the blind secular faith of so many, in America and in Israel, that forcing "the settlers" to abandon the birthplace of Western monotheism will bring peace any closer - well, that looks like the biggest myth of all.

The reality behind the myths is stark and simple, and is not a matter of Left/Right, as the elite media in America and Israel keep insisting, but of East/West. If the West will not fight to maintain its hold on its two birthright cities - the Hebron of Abraham, Isaac, and Jacob, and the Jerusalem of Jesus - then, secular faith in diplo-speak aside, it will in the end cede the entire Middle East to an imperialist brand of Islam still seeking conquest, not coexistence, with the Judeo-Christian world and the Western civilization it gave rise to. If, on the other hand, Israel and America join together to insist, clearly and forcefully, that Jews and Christians will not be defeated and driven hence, then Islamist imperialism will suffer a major defeat, and peace and coexistence may yet have a chance.

Today We Buried Gedalia
Vayelech 5783: Regret and Repent
Rabbi Sacks: Focus On the Important, Not the Urgent
Put Your Foot Down: Are Human Feet Poorly Designed?
Comments
MOST POPULAR IN Israel
Our privacy policy
Aish.com Is Looking for Great Writers