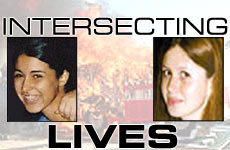 Two young women snuffed out by terrorists. Their lives so different, yet so much the same.

December 9 -- I wake up to the news of another suicide bomber in Haifa. I feel that my capacity to bear the pain of our losses is reaching its limit.

I spent one day last week with Boris and Alla, whose pain is deeper than words express, and who suffer the unspoken fear of every parent.

Boris and Alla are the parents of Tanya Boravik who was killed on December 2 in Haifa by a mass murderer (suicide bomber sounds too romantic). Tanya was a talented photographer whose deep eyes betrayed her youth.

Tanya, 23, came to Israel in 1995 from the Ukraine as part of a program for high school students. She wrote home how wonderful life in Israel was, and her parents, brother and grandmother arrived a year later to settle in Israel.

At the cemetery, Tanya's father placed a large framed photograph on her grave. My eyes kept being drawn back to hers as the Deputy Defense Minister's words were drowned out by the torrential rains. The heavens are crying, someone whispered.

Speech after speech filled the air with words that found no hearts, because the sense of bewilderment was too profound.

Tanya had participated in the Aish Haifa community. She came for the holidays to be with other students and young families who appreciate the opportunity to build a Jewish community that spoke to their needs: immigrants still suffering the effects of Russia's 70-year campaign to destroy Jewish life.

For 70 years, Russian Jews were denied the right to know or practice Judaism. Study of Torah was seen as such a serious ideological threat, that even the teaching of Hebrew was punished by imprisonment, or worse. Rabbis and leaders were persecuted or killed; schools, synagogues, and all forms of Jewish community life were eliminated.

After the funeral, Tanya's father pleaded with me to stay. "Please understand. We are victims of the Soviet war on Judaism. I don't even know how to mourn as a Jew."

I had once attended a Soviet-style mourner's meal in Minsk, but to see it in Netanya was much more unsettling. It is painfully tragic that after 70 years of forced assimilation, we have brought Russian Jews home to Israel, but not yet home to their heritage.

After some time with Tanya's family, I left for Jerusalem.

I went straight to the memorial service marking the 30-day mourning period for Shoshi Ben Yishai, who was born in America. Shoshi was murdered by a terrorist as she traveled home from school with her friends on Jerusalem's Egged bus #25. That is the bus that travels to my neighborhood. Shoshi was a schoolmate of my daughter Nitza.

I was in the U.S. when Shoshi was killed. I immediately realized from the first reports that the terrorist had targeted the busload of girls from my daughter's school. I trembled with fear as I tried to get through the busy phone lines to reach my home. When I finally got through, Nitza answered with a calm and strong voice. "Yes, my friends were on the bus. But we don't know the whole situation yet."

Later when she spoke with me about Shoshi's funeral, her depth and confidence was remarkable. "I'm okay, Abba," she attempted to reassure me. "Are you?"

I reflected on how deeply my daughter lives with the reality of life and death, dealing with these issues through the prism of Judaism. But for her, these Jewish concepts are not abstract; they are her reality, naturally expressed in her response to this tragedy.

At the memorial service, Shoshi's parents, together with Shoshi's younger siblings and her 200 schoolmates, were listening to eulogies given by rabbis, teachers, and friends.

A 40-page booklet with stories, pictures and lessons learned from Shoshi's life was distributed. She always had a smile on her face and was the first one to greet a new person or guest. She would sense a problem in a friend and initiate a discussion to help that person open up and see how she could help.

Then the rabbi made a point that rung so true. Mourning the death of a young person is mourning the loss of potential. The life that could have been lived. I looked at Shoshi's smiling face on the booklet and saw the joy she could have brought, the family she could have built, the dreams unfulfilled.

We are not here to lessen the pain, the rabbi said. No one can do that and no one should try. The family's pain is real and will not go away for a lifetime. This pain is real and is meant to be felt and learned from.

Shoshi died "Al Kiddush Hashem" - killed because she was a Jew. Those who hate Jews and seek to destroy good, testify to our purpose as a nation. God's covenant with the Jewish people beckons us to teach the world about goodness -- and to carry the burden as the target of evil.

In our response to death, we can teach the meaning of life. We tune into the reality of an eternal soul. We understand the Jewish response of teshuva (individual and community change) to tragedy. And we have confidence that God is with us in our sorrow and in our joys.

I thought back to my experience at the home of the Russian immigrants, Boris and Alla. I wished they were here. Or that we were there for them. Tanya -- born in Russia, and Shoshi -- born in America. Two families lost their eldest child, both young women whose smiles and personalities brought light wherever they went.

They never met, but their lives, at this moment, intersect.

In difficult times, the Jewish family is one. At all times, we need to act more as one family. Jews are being murdered in the streets. How much do we care? What will we do?

Tanya's family, and hundreds of thousands like them, are painfully lacking Jewish knowledge and community that could be a source of wisdom and support in these very trying times.

By contrast, Shoshi's family were comforted to see their daughter's friends undertaking a greater commitment to life, in response to her death.

To change in some meaningful way, no matter how small, in the merit of the person who died, is an affirmation that her soul lives on, eternally benefiting from the positive deeds she continues to inspire.

It is also a response that says: I am not indifferent to suffering. By changing ourselves, we express the belief in God's involvement in our lives, and that everything happens with meaning and purpose. Tragedy that touches us requires us to wake up and change the state of affairs within us and around us.

I looked at the list of things undertaken by Shoshi's schoolmates: "I will improve my use of speech." "I will try to greet everyone with a smile." "I will be more sensitive to others and their problems."

I asked myself: What am I prepared to do? How will I change for the better? What can I undertake that will really make a difference?

When Natan Sharansky was locked in a KGB prison, his wife Avital was asked, "How can we help? She responded: "If he were your brother, your son, your husband, you would figure out a way."

I believe if we would appreciate our shared destiny as Jews, we would begin to reach out to each other differently, to treat each other more as family. For the next 30 days, I am going to work at improving that sensitivity in myself. Those who I wouldn't normally see as part of my community, I will try to view as my extended family.

Perhaps, we -- you and I -- can undertake to be part of Tanya's family and community.

Let's all do something in the merit of the soul of Tanya, and of Shoshi. Put your ideas for improving ourselves and our communities in the comments box below. Perhaps we can fill up a booklet, and present it to one pained family of Russian immigrants, at the end of their shloshim (30-day mourning period).

Perhaps the Jewish people can grow closer together.

Perhaps we can find an end to this horrible suffering.

The Volunteers: Answering the Call of History