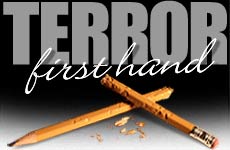 On a bus targeted by a terrorist, a 16-year-old girl faces death.

On Sunday, November 4, twenty girls from the 11th grade of Beit Shulamit, a religious girls' high school in Jerusalem, boarded public bus #25, as usual, to go home. The bus was a double bus: two long buses connected in the middle by what Israelis call an "accordion," so that it can turn corners. The bus was crowded. Most of the Beit Shulamit girls had to stand.

Sixteen-year-old Orah stood in the back of the bus talking to her good friend Shoshi Ben Yeshai. Another friend standing in the middle of the bus called to her. She had something to tell her. Orah made her way forward through the crowded aisle.

At the French Hill intersection the bus stopped for a red light. Suddenly Orah heard gunshots. She looked out the window and saw an Arab man firing an automatic rifle into the back half of the bus. Instantly the bus was full of shattered glass, blood, and screaming.

Orah and the other passengers dove for the floor, body piling atop body in the packed bus.

Orah and the other passengers dove for the floor, body piling atop body in the packed bus. Sure she was going to die, Orah uttered the Shema, the profession of faith which observant Jews recite twice every day and at the moment of death. Suddenly she was seized with fear, not of death itself, but of what comes after death. She realized she would have to stand before the heavenly tribunal and account for her life. There were so many things she would have done differently. Now it was too late.

A chorus of Shema Yisrael rose from all directions, punctuated by the rapid fire of the machine gun. A non-religious girl, screaming hysterically, fell on top of Orah. "Say Shema Yisrael," Orah and her friend pleaded with the girl. She said the words, but her hysteria did not abate.

Orah could hear people around her reciting verses of Psalms. She realized that the sound of shots had ended. Two soldiers stationed on the other side of the intersection had killed the terrorist.

Within a couple minutes the doors opened and police were pulling passengers off the bus, trying desperately to reach the wounded and dead. Orah slowly struggled to her feet. She was alive, unhurt except for a few scratches. She felt like she had been given life anew. She would do things differently this time.

Only later did she discover that her good friend Shoshi had been murdered by the terrorist, who had also killed 14-year-old Meni Regev and wounded 45 people. As of this writing, ten of Orah's schoolmates are still hospitalized, one of them in serious condition: 14-year-old Sharona Rivka (bat Rina Yehudit for those who want to pray for her).

That night Orah and those of her classmates not in the hospital attended Shoshi's funeral. One of their teachers eulogized Shoshi as the "epitome of smiles, good cheer, and desire to help." Orah, standing by her friend's grave, resolved to pattern her life after Shoshi, who had excelled in love for the Jewish people and the Land of Israel. Shoshi, who narrowly escaped two terrorist attacks in the last year, had several times told her friends, during their endless discussions of the war in Israel, that when she died, she hoped it would be "al kiddush Hashem," for the sanctification of God's name.

When they passed the intersection, she and her friends held hands and wept.

"Shoshi was the type of person who would have volunteered to die instead of her friends," Orah avers.

The next morning Orah boarded the #25 bus and went to school. When they passed the French Hill intersection, she and her friends held hands and wept. At the morning prayer service, Orah prayed with greater intention than she ever had in her life.

"Although we all cry a lot," Orah declares, "I feel I have been given a big gift. Now I can better appreciate what I have."

In coping with both loss and fear (every sudden noise makes her jump), Orah is bolstered by her religious faith and by the support of those who love her.

Although Orah was born in Israel, both her parents made aliyah from America. When asked if, in the aftermath of the attack, she ever fantasizes about moving to a safer place like the United States, Orah laughs, "What? After the World Trade Center? Are you serious?"

Orah's classmate Gila, who was also on the attacked bus, says that while they all continue to take the #25 bus, no one wants to go on the bus alone. "We try to be together in as big groups as possible."

"Why is that?" I ask, wondering what even a dozen teenage schoolgirls can do to protect themselves from an armed Arab terrorist.

"We can hold each other and talk to each other," Gila explains.

I hang up the phone from talking with Gila and Orah, and go into my living room, where my 7-year-old son and 13-year-old daughter are working on puzzles. Trying to walk the tightrope between scaring them and preparing them, I ask offhandedly, "If you ever hear a bomb or gunshots, what do you do?"

My daughter answers: "Get down."

My daughter gropes for an answer. Finally she comes up with: "Stay down."

"And then what do you do?" I persist.

My son jumps up proudly with the answer: "Say Shema."

"That's right." This is the second time this year we have discussed how a Jew should die with Shema on his lips, conscious of God with his last breath. The first time was after the Sbarro's bombing, where five members of one family died calling out the Shema. "And God willing," I add, "you'll be fine, and can go about with your life."

I retreat from the living room, enough said. But I keep feeling: "Something is wrong with this picture."

What am I doing, a mother in Israel in the 21st century, teaching my children how to face death at the hands of Jew-haters?

What am I doing, a mother in Israel in the 21st century, teaching my children how to face death at the hands of Jew-haters? That gruesome task was appropriate for Jewish mothers in the Rhineland during the Crusades, in Poland during the Cossack massacres, in Russia during the pogroms, all over Europe during the Holocaust. But the Zionist dream was supposed to end all that!

Herzl's whole goal was to establish a Jewish homeland as a refuge from anti-semitism, where Jewish children would be safe from those who hate them. Yet this year we have seen children maimed when their school bus was blown up, a baby deliberately shot to death in her mother's arms, another baby whose head was crushed in a rock-throwing attack, numerous youngsters killed in drive-by shootings, a disco bombing which murdered 20 teenagers, and and two 14-year-old hikers murdered so brutally that their bodies were almost unidentifiable.

While I agree with the many anguished voices who are demanding that the Israeli government do more to protect its citizens, in my gut I know that neither the government nor the army has the power to save us. After all, two soldiers were permanently posted at the French Hill junction, but in the two minutes it took them to cross the busy intersection, how much carnage was wrought! Nor can we hermetically seal all the areas where Arabs live. I have Arabs living right next door to me!

In the end, Orah and Gila got it right.

Fearful Nights in the City of Peace

No Way to Promote Israel
Don’t Believe in Other Gods Versus God is One
Seeing Without Eyes
Why Shouldn’t We Eat Whatever We Want?
Comments
MOST POPULAR IN Israel
Our privacy policy
Aish.com Is Looking for Great Writers