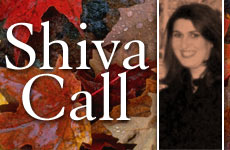 Is it possible to pay a shiva call to a stranger? One woman discovers that it's not so strange at all.

Yesterday, I decided that I would make a shiva call to the Haymans. Mr. and Mrs. Hayman lost their only child last week when a suicide bomber blew up Sbarro’s pizzeria in Jerusalem. I am sure you are all aware of this event.

Shoshana, their pregnant daughter, lived in my community in New Jersey. I did not know Shoshana, and before yesterday, I did not know her parents, the Haymans. So, I was not so comfortable going to their house, while they were sitting shiva with their family and friends.

I walked up to the front door, closed my eyes, took a deep breath, and then started to shake. I could not bring myself to walk through the door. What would I say? What would I do? How was I going to look at these people who lost their only child, and unborn grandchild?

How was I going to look at these people who lost their only child, and unborn grandchild?

My heart was racing. I clinched my teeth, and said to myself, "Renee, this is not about you!"

I tapped twice on the door. I walked in, and saw several people sitting around in a circle. I was not sure what to do. A woman invited me to sit next to her. I think she was a close family friend. I was silent for several minutes. I was very uncomfortable, and overwhelmed with sorrow.

I glanced at Mrs. Hayman just as she looked up at me. I told her that I recently moved to Passaic, but I did not know Shoshana. She took my hand in hers, and told me a story about Shoshana. She spoke to me for 10-15 minutes, holding my hand, and looking at me the entire time.

I knew then that I had made the right choice by walking through the door. I don't think that I have ever in my life seen such strength, courage, and trust in God. As Mrs. Hayman gripped my hands more firmly, and with the tears rolling down my face, I wondered if I would ever have half of her belief in God.

I thought that I would only stay for about 15 minutes, but 45 minutes later, I had to force myself to leave, as a friend was waiting for me to pick her up from work. Mrs. Hayman hugged me three times before I left, and as she embraced me tightly, she thanked me for being there. I walked out the door the same way I walked in it, shaking!

Sometimes sharing a tear is the only thing you can do.

I have met the Hayman's, and in some way, I know their daughter, Shoshana. I just wanted to share this experience with you. There are painful times in our lives. Sometimes, we don't know what to do, or what to say to someone in pain, so we avoid the situation.

Memorial services for Shoshana (Judy) Greenbaum, the 31-year-old pregnant woman killed in the Sbarro terrorist bombing, will be held at the following locations:

Jerusalem - unveiling of the tombstone, at 5 p.m. on Wednesday, September 5, at the Har HaMenuchot cemetery in Jerusalem.

Shoshana is the daughter of Dr. Alan & Shifra Hayman of Los Angeles.

Thank You, Hero
Lessons from the Book of Jonah
Where Are We? The Body, Brain, Soul Problem
Dr. Sheila Nazarian’s Escape from Iran
Comments
MOST POPULAR IN Israel
Our privacy policy
Aish.com Is Looking for Great Writers