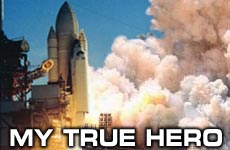 Yes, Colonel Ramon, Israel's first astronaut to enter outer space, is a hero. For me there is another hero: his mother, a survivor of Auschwitz.

I don't think there was a person in Israel who didn't watch the Shuttle Columbia blasting off from the Kennedy Space Center in Florida, yesterday.

We watched with trepidation and anxiety, but above all pride as the graceful white shuttle lifted off into the blue Florida sky, trailing a white plume behind it. For us Israelis, it was a special flight, because our own astronaut, Colonel Ilan Ramon was among the crew, the first Israeli to enter space.

For a short while we allowed ourselves to forget our problems, our differences, even the coming elections, and were united in hailing Colonel Ilan Ramon as our hero.

But for me, there was another hero -- someone that was hardly mentioned in the Israeli media. If it weren't for an American TV station, which briefly stated that Colonel Ilan Ramon's mother was an Auschwitz survivor, I too would have been ignorant of the fact.

To most, the fact that his mother was a Holocaust survivor from Auschwitz may be baffling as to why I would call her a hero.

I will tell you why.

After the collapse of Hitler's Reich and our liberation in the beginning of May, 1945, I served in the US army as an interpreter. I was fortunate enough to have learned English during the war, a language that very few survivors spoke.

I served in a unit that was attached to the CIC, (Army Intelligence). We were 11 men, all of them, except myself, American service men who knew a second language besides their native English. Our job was to find Nazis hiding among the displaced persons in the DP camps.

However, we also visited camps where only Jews lived, such as Feldafing, Fherenwald and more.

For a while I was the interpreter for a Colonel Woodhouse, who for some reason was attached to our unit. Colonel Woodhouse was an English psychiatrist who was sent to evaluate the mental state of the Jewish concentration camp survivors.

"The trauma caused to Jewish inmates of concentration camps was unprecedented in its severity. They would never be able to live normal lives, get married and have children." I will never forget his official evaluation. He didn't keep it a secret and I was able to read it.

“I came to the conclusion that the trauma caused to Jewish inmates of concentration camps was unprecedented in its severity and that they would never be able to live normal lives, get married and have children.

Well, Colonel Woodhouse, allow me to introduce you to Mrs. Ramon, an Auschwitz survivor, who not only got married and brought children to this world, but brought up a son that anyone in the world would be proud of to call as his own, despite your prognosis.

Perhaps, from the medical point of view, he was right. But he didn't count on the spirit of the survivors. When we were liberated, we were almost naked, bereft of all possessions, clad in a prisoner's striped uniform and wooden clogs. We owned nothing, not even underwear, socks or a handkerchief. We were like walking skeletons, all skin and bones.

My schooling was interrupted when I was 12, and I was subjected to brutalities that mankind has never known. I was liberated from the Nazis, but what next? So I stood before a world I considered hostile, age 17, and I had to make my way through it.

And yet I did it and I did it well.

I don't know Mrs. Ramon, but when I watched her son taking off into space, I am sure that she did more than well. Therefore, Mrs. Ramon, I salute you. You too are my hero.

Solly Ganor, a Holocaust survivor, lives in Herzelia Pituach, Israel. Mr. Ganor kept a diary while in the Kovno ghetto, promising his friends that if he should survive the Holocaust, he would tell the world what happened. For 50 years, he shied away from the subject until a historian came to Jerusalem with the person who saved his life at the end of the World War Two. He was a Japanese American soldier by the name of Clarence Matsomura of the 522 artillery battalion. This emotional reunion resulted in the publication of his diary, "Light One Candle." Mr. Ganor's diary has been recommended by Eli Wiesel and is taught in high schools in Germany and Japan. He has fulfilled his promise to his perished friends, finally lighting one candle for them.

Antisemitism Isn’t Only a Jewish Problem

How My “Woke" Children Woke Up to Anti-Israel Bias and Antisemitism
Why Are The Prayers Of Yom Kipur So Repetetive?
Ha'azinu 5783: A Time for Unity!
Twisted Thinking
Comments