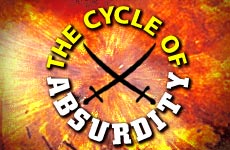 With the body count of Israeli civilians mounting, it's time to get tough.

Poor Anthony Zinni. Sent to the Middle East with the nearly impossible task of forging a cease-fire, America's envoy barely had time to unpack his suitcase before Palestinian Authority Chairman Yasser Arafat decided to undermine his mission and launch a wave of terror against Israel.

Since Zinni's arrival last week, more than 30 Israelis have been killed and 300 others wounded by Palestinian terrorists. Buses have blown up in Haifa and near Pardess Hanna, youths in Jerusalem were massacred in a double-suicide bombing, and mortar rounds and gunfire have been directed at Israelis in Judea, Samaria, and Gaza.

But Zinni remains undeterred. Speaking to reporters the other day, he insisted that he will stay in the area "as long as it takes" to achieve a cease-fire. For his sake, I certainly hope that he brought along some extra Jockey shorts, because chances are there won't be a lull in the violence anytime soon.

Arafat's Fatah faction has set up its own unit of suicide bombers.

After the past week of bloodshed, it should now be clear to even the most ardent defenders of the Palestinian cause that Arafat is not a partner for peace. His Fatah faction of the PLO has begun launching attacks against Israel within the pre-1967 borders, such as the November 27 shooting attack in Afula that killed two Israelis, and has even set up its own unit of suicide bombers. And Chief of General Staff Lt.-Gen. Shaul Mofaz recently told the Knesset Foreign Affairs and Defense Committee that Arafat had explicitly ordered the Fatah Tanzim to carry out terror attacks against Israelis (The Jerusalem Post, November 28).

If that is not enough to earn the Palestinian Nobel Laureate a cozy little cell with bars on the windows, then it is hard to imagine what more he would have to do. Through his actions, Arafat has demonstrated beyond a shadow of a doubt where he stands in the battle between good and evil. He has cast his lot with the likes of Osama bin Laden and the Taliban, and he should therefore be treated accordingly.

As self-evident as this would appear to be, there are still those incapable of mustering up the moral courage to point the finger of blame squarely at Arafat. Take, for example, the European Union. After the attacks in Jerusalem and Haifa earlier this week, the EU issued a statement condemning the violence and calling on the PA to prevent further attacks. It went on, however, to speak of the need for both sides to work toward "breaking the cycle of violence," as if both Israel and the Palestinians are equally to blame for the events of the past 14 months. By referring to the intifada as a "cycle of violence," rather than a full-fledged Palestinian assault against Israel, the EU is choosing moral equivalence over moral clarity, which effectively provides the Palestinians with political cover to carry out future assaults.

The fact of the matter is that there is no "cycle of violence" in the Middle East. If anything, there is a "cycle of absurdity," one which goes something like this: innocent Israelis are murdered by the PA and its henchmen; the international community feigns concern, expressing its "regret" and "revulsion"; Israel takes limited measures to defend itself; and the international community condemns Israel's "excessive and disproportionate" response.

Israel takes limited measures to defend itself, and the international community condemns the "excessive and disproportionate" response.

The effect of this "cycle" is not only incremental. It is also dangerous. Pressure mounts over time, and Israel ends up refraining from doing what needs to be done to quash Palestinian terror. And therein lies the absurdity -- because while the Palestinians continue to perpetrate senseless violence, Israel's government has thus far failed to stop it.

Since the Palestinians refuse to break this ugly cycle, Israel has no choice but to step up to the plate and shatter it once and for all. The only way to do so is not to hold back from fighting terror, as the Europeans and others have suggested, but to do precisely the opposite -- to thoroughly uproot the terrorist infrastructure and completely dismantle the PA.

Doing so will not only break the "cycle of absurdity" -- it will also save countless Jewish lives. We need to stop worrying so much about how we look, and start worrying a little more about how we live. That, after all, is what the government was elected to do.

2013 News from Israel You May Have Missed

The Rules of War

The Settlements Myth
Should I Break Up, Get Engaged or Keep Dating?
Time Is Your Precious Commodity
A Constant World in Flux
Comments
MOST POPULAR IN Israel
Our privacy policy