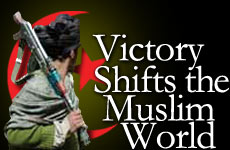 The Sept. 11 attacks were expected to take a major step toward extinguishing America. Instead they served as a rousing call to arms, reducing the prospects of militant Islam.

November 19, 2001 -- Early on Nov. 9, the Taliban regime ruled almost 95 percent of Afghanistan. Ten days later, it controlled just 15 percent of the country. Key to this quick disintegration was the fact that, awed by American air power, many Taliban soldiers switched sides to the U.S.-backed Northern Alliance.

According to one analyst, "Defections, even in mid-battle, are proving key to the rapid collapse across Afghanistan of the formerly ruling Taliban militia."

This development fits into a larger pattern; thanks to American muscle, Afghans now look at militant Islam as a losing proposition. Nor are they alone; Muslims around the world sense the same shift.

If militant Islam achieved its greatest victory ever on Sept. 11, by Nov. 9 (when the Taliban lost their first major city) the demise of this murderous movement may have begun.

"Pakistani holy warriors are deserting Taliban ranks and streaming home in large numbers," reported The Associated Press on Friday. In the streets of Peshawar, we learn, "portraits of Osama bin Laden go unsold. Here where it counts, just across the Khyber Pass from the heartland of Afghanistan, the Taliban mystique is waning."

If militant Islam achieved its greatest victory ever on Sept. 11, by Nov. 9 their demise may have begun.

Just a few weeks ago, large crowds of militant Islamic men filled Peshawar's narrow streets, especially on Fridays, listening to vitriolic attacks on the United States and Israel, burning effigies of President Bush, and perhaps clashing with the riot police. This last Friday, however, things went very differently in Peshawar.

Much smaller and quieter crowds heard more sober speeches. No effigy was set on fire and one observer described the few policemen as looking like "a bunch of old friends on an afternoon stroll."

The Arabic-speaking countries show a similar trend. Martin Indyk, former U.S. ambassador to Israel, notes that in the first week after the U.S. airstrikes began on Oct. 7, nine anti-American demonstrations took place. The second week saw three of them, the third week one, the fourth week, two. "Then - nothing," observes Indyk. "The Arab street is quiet."

And so too in the further reaches of the Muslim world - Indonesia, India, Nigeria - where the supercharged protests of September are distant memories.

American military success has also encouraged the authorities to crack down. In China, the government prohibited the selling of badges celebrating Osama bin Laden ("I am bin Laden. Who should I fear?") only after the U.S. victories began.

Similarly, the effective ruler of Saudi Arabia admonished religious leaders to be careful and responsible in their statements ("weigh each word before saying it") after he saw that Washington meant business. Likewise, the Egyptian government has moved more aggressively against its militant Islamic elements.

This change in mood results from the change in American behavior.

For two decades - since Ayatollah Khomeini reached power in Iran in 1979 spouting "Death to America" - U.S. embassies, planes, ships, and barracks have been assaulted, leading to hundreds of American deaths. In the face of this, Washington hardly responded.

And, as Muslims watched militant Islam inflict one defeat after another on the far more powerful United States, they increasingly concluded that America, for all its resources, was tired and soft. They watched with awe as the audacity of militant Islam increased, culminating with Osama bin Laden's declaration of jihad against the entire Western world and the Taliban leader calling for nothing less than the "extinction of America."

The Sept. 11 attacks were expected to take a major step toward extinguishing America by demoralizing the population and leading to civil unrest, perhaps starting a sequence of events that would lead to the U.S. government's collapse.

Instead, the more than 4,000 deaths served as a rousing call to arms. Just two months later, the deployment of U.S. might has reduced the prospects of militant Islam.

The pattern is clear: So long as Americans submitted passively to murderous attacks by militant Islam, this movement gained support among Muslims. When Americans finally fought militant Islam, its appeal quickly diminished.

Victory on the battlefield, in other words, has not only the obvious advantage of protecting the United States but also the important side-effect of lancing the anti-American boil that spawned those attacks in the first place.

The implication is clear: There is no substitute for victory. The U.S. government must continue the war on terror by weakening militant Islam everywhere it exists, from Afghanistan to Atlanta.

This article originally appeared in the New York Post