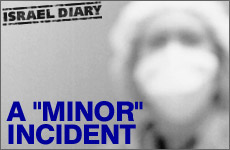 How bad can "light injuries" be? As someone who works in Jerusalem's Shaare Zedek Medical Center, I know the extent to which "light injuries" can leave permanent scars, both physical and emotional.

When we read of someone who has been "lightly injured" in a terrorist attack, we tend to consider the incident as being of only minor significance -- after all, how bad can "light injuries" be? As someone who works in Jerusalem's Shaare Zedek Medical Center, I know the extent to which "light injuries" can leave permanent scars, both physical and emotional. The two yeshiva students described in the following report were considered to be "lightly injured" -- in fact, the incident was considered so minor as to only rate a few lines in the newspapers, if it appeared at all. To these boys, their families, and their friends, it was anything but minor, and there have been literally hundreds more "minor" incidents like the one they endured over the last couple of months.

Terror hits harder when it hits close to home. For those who work at Shaare Zedek, the hospital is their second home, and now they have witnessed the results of terror close-up.

Two boys, yeshiva students aged 15 and 16, were rushed to the hospital's Emergency Department last week after their school bus was fire-bombed on the trip home. Both are suffering from severe burns to their faces and hands.

"I'm doing better," says Yaakov Brizel, 15, attempting to smile at his visitor, but clearly in pain. His hands, ears and forehead are bandaged, his face is red and raw.

"Their suits and their hats protected most of their bodies," says Yochanan Brizel, father of Yaakov. "The skin that was exposed got burnt. We were told the burns are similar to those typically suffered by Armored Corps soldiers. I guess these boys are in the yeshiva division of the Armored Corps now."

Yochanan Zaltzman, 16, is surrounded by his fellow students, who are trying to cheer him up but themselves seem somewhat traumatized by the sight of their injured friends. Yochanan's face is covered by thick white cream. Bandages covering his chest poke out from beneath his hospital pajamas. He moves gingerly, as if trying to avoid unnecessary pain. "I'm doing much better than I was," he says. "When I first arrived at the hospital, I was in severe pain, and very frightened. They're taking good care of me here."

The attack took place under cover of darkness, near Nebi Samuel, burial place of the prophet Samuel, just outside of Jerusalem. The driver of the bus saw the attacker leap out from hiding and throw a Molotov cocktail, but was unable to take evasive action. The flaming bottle smashed through the bus's front window and hit the two boys directly. The driver was only slightly singed, and was able to pull over and call for help.

"All I remember is suddenly hearing a bang, seeing my clothes on fire and running out the back door of the bus, trying to put out the flames," says Yochanan.

An ambulance arrived within minutes to rush the two boys to Shaare Zedek. The remaining six children on the bus were understandably panicked, particularly Yaakov's 14-year-old younger brother, and a passing van driver volunteered to take them each home.

The two boys are expected to remain in the hospital's Plastic Surgery department for at least two more weeks. Physiotherapy, already begun at the hospital, will continue at home following their release.

The families of the boys have been at their sides constantly, and hospital employees, too, have showered them with love and attention. The hospital's Public Relations department brought them gift fruit baskets, and is checking regularly on their progress.

Yochanan Brizel expresses great satisfaction with the care his son has received at Shaare Zedek. "You have an absolutely dedicated staff here," he says.

The hospital's synagogue is on the same floor as Plastic Surgery, only a few steps from the department, and the boys have already been making an effort to attend minyanim.

"I saw Yaakov and his father sitting in the shul, learning together, with the boy all bandaged up," said hospital rabbi Moshe Peleg. "It was a very emotional sight."

What I Saw During Pillar of Defense