Where Were You CNN? 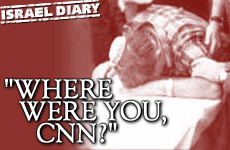 Amidst the grief of a friend's funeral, an Israeli woman declares: Jews are human, too.

I didn't see you at the funeral today, CNN. I looked all over for you, but there were 3,000 people, so it is possible that I missed you.

I did, however, see a few seconds of film on CNN that evening, but it passed by in the blink of an eye. You did mention that two Israeli soldiers had been killed. No ages, no personal insights, no faces to the names, no nothing. No long shots of hundreds, maybe thousands of mourners... Nothing like the coverage CNN gives to Palestinian funerals.

No close-ups of his grieving parents, of his 18-year-old girlfriend, eyes swollen with tears. No sounds of mourners, bodies wracked with muffled sobs. No medium shots of uniformed kids/soldiers, guns slung around their chests, crying in each other's arms.

Unlike all the Palestinian funerals you broadcast, there were no shouts for revenge, no cries of death to the enemy. No shouts or screams or clenched fists and hands raised in the air. No angry young men, faces swathed in hate and defiance.

Corporal Elad Wallenstein of the Israeli Navy and a friend of my son's since elementary school, was buried yesterday, the first soldier of "the gang" to have been killed in an army/terrorist attack. Corporal Wallerstein was 18 years old when he was killed and had been in the army (the Navy, specifically) for a total of two months. His older brother had gotten married only two weeks earlier, and Elad had been named after an uncle who too had been killed at age 18 in another war, in a fair fight. Not by a cowardly sniper who shot and fled for his life.

The day of Elad's funeral was supposed to be the day that he went onto "his ship," but instead his body lay in a simple pine box as his friends, family, teachers and fellow civilized man stood in stunned silence, disbelieving. "This couldn't have happened to one of ours." But it did.

Elad's funeral was even worse than I imagined it would be. Everyone was in tears, soldiers and officers alike. The mayor gave a touching eulogy and he too broke at the end and was barely able to get the last words out. Unlike the long and dramatic Palestinian funerals you broadcast, this Israeli funeral was quiet and civilized, even if Elad's killers are not.

After Elad's coffin had been tenderly placed into the earth and covered lovingly by his friends and fellow soldiers, and after his family and girlfriend were whisked away, nobody could leave. Perhaps we were still numb with shock, perhaps we understood that once we left Elad, his death would indeed be final, and we would be leaving him all alone. Elad's friends sat around his grave so covered with flowers that there wasn't any room for us to rest ours.

And all through the funeral service, through the corner of my eye, I kept looking for you, but alas, did not see you.

Elad's funeral would have been a golden opportunity for CNN to give its viewers a look at our side, but apparently, you didn't think so.

But it is not too late. Sadly, there will be more Elads killed. It is not too late for CNN to capture the human side of Israelis, instead of always showing the grief of the Palestinians. Because, in case you forgot, not every terrorist victim is a settler who died to make a statement. When our people die, we do not rejoice because the dead are now "martyrs in Paradise." When our people die, we physically ache and cry out to God, "Why? Why?"

The Most Culturally Significant Jewish Moments of 2021
Korach 5782: Visit to Lift the Spirit
That Time The Ivy League Found A Way To Limit Jewish Enrollment
Would You Rather Be Right or Happy?
Comments
MOST POPULAR IN Israel
Our privacy policy