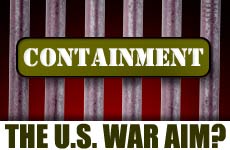 Without precise goals, the war will almost certainly go awry. Here's one suggestion: contain radical anti-Westernism among Muslims so that its adherents no longer assault Americans or their allies.

"The objectives are clear," President Bush declared on Oct. 7, announcing the U.S. strikes in Afghanistan.

Sorry, they are anything but clear. On the one hand, Bush defined the objectives as "the disruption and ... defeat of the global terror network." On the other, Defense Secretary Donald Rumsfeld countered that "the idea of eliminating [terrorism] from the face of the earth" is unrealistic. Then Rumsfeld himself offered an alternative goal - preventing "people from adversely affecting our way of life."

Americans being a freedom-loving people, he said, victory means establishing "an environment where we can in fact fulfill and live those freedoms." Well, as the newsletter Inside the Pentagon wryly noted, this is not exactly a specific military objective on the order of staking an American flag in Kabul's city center.

Why the lack of specificity? For one, this new conflict is shadowy, making the usual war goals (capture a territory, destroy an army) irrelevant. For another, the desire to include skittish Muslim states in the U.S.-led coalition leads to a reticence about goals. Finally, there's a need to keep open the possibility of taking care of business outside Afghanistan -especially in Iraq. Ambiguity permits flexibility.

But it also contains dangers. As Carl von Clausewitz showed in his classic "On War," unless politicians give military officers precise goals, the war will almost certainly go awry. This simple but profound insight explains why a book published in German in 1832 is still studied at U.S. war colleges.

Generals must have war goals, so here is one suggestion what to tell them:

Contain radical anti-Westernism among Muslims - Osama bin Laden's militant Islam, Saddam Hussein's fascism, or other variants - so that its adherents no longer assault Americans or their allies.

Note the word contain, not destroy. Radical anti-Westernism is so popular and widespread that it can only be fended off, not defeated.

We need a "long-term, patient but firm and vigilant containment" of radical anti-Westernism's expansive tendencies.

Likewise, we now need a "long-term, patient but firm and vigilant containment" of radical anti-Westernism's expansive tendencies. The goal must be to convince its adherents that the use of force against Americans is at best ineffectual and at worst counterproductive.

Or, as Charlotte Beers, the State Department's information chief, rightly puts it, the enemy should look at America and say, "I understand how you are, I want nothing to do with it, but I would not want to murder you as a result of it." That would indeed constitute victory.

Militant Islam and Saddam's Iraq are both totalitarian and both view the United States as the single greatest obstacle to attain their goals, so convincing them to desist will require more than logic and diplomacy. Containment of radical anti-Westernism will likely require taking steps in a variety of countries. These could include closing media outlets, intimidating radical sheikhs, staunching financial flows, killing militia leaders and even uprooting regimes.

Nor can one forget the brand-new Office of Homeland Security and the domestic side of this war; the enemy within is no less dangerous than the one abroad.

Law enforcement has already arrested or detained nearly 700 people in connection with the Sept. 11 atrocities - and prudence requires assuming this to be only a fraction of the enemy's operatives in the United States.

The domestic goal is also containment: to prevent radical anti-Westerners in the country who would do harm from doing so by expelling, jailing or otherwise restraining them.

That dimension brings its own distasteful changes, from long lines at airports to enhanced background checks for foreigners entering the country. The media have already altered to these harsher circumstances; banks, universities and many manufacturers must soon follow.

This, then, is the war goal: containment abroad and at home. Unpleasant to implement, difficult to achieve - but, then, what else can one expect from war?

No: The Real Obstacle to Peace

Obsession: Radical Islam's War Against the West (12 min video)
Should I Break Up, Get Engaged or Keep Dating?
Time Is Your Precious Commodity
A Constant World in Flux
Comments
MOST POPULAR IN Israel
Our privacy policy