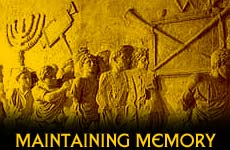 Do we really need a new Holocaust every few generations in order to remember? We already have a day: Tisha B'Av.

The conversation -- a real one -- took place a number of years ago on the outskirts of a non-religious kibbutz in the Galilee, on a hill overlooking a lush valley.

The teen-aged cousins, one born and bred on the kibbutz, the other an American newcomer to the Holy Land on a short visit before the start of his yeshiva's academic term, had first met only days earlier.

They had been speaking about family, personal experiences, and sundry things their very different lives nevertheless had in common. And then, the observant boy mentioned, entirely en passant, the imminence of the Jewish fast day known as Tisha B'Av.

"We don't observe that holiday on the kibbutz," his cousin pointed out. "The Temple's destruction just isn't relevant to our lives here."

The American boy hesitated for a long moment before asking, "Do you observe any Jewish day of mourning?"

Another pause, this one longer. The yeshiva student knew that the national day of Jewish mourning, Tisha B'Av, on one level encompassed every tragedy in Jewish history, that not only was the first Jewish Holy Temple destroyed on that day 2,400 years ago, and the second one, 1900 years ago, on the very same day, but that the rebel Jewish forces at Betar were annihilated by the Romans on it as well.

He also knew that quite arguably the true genesis of what would culminate in Germany's "Final Solution" -- the First World War -- began on Tisha B'Av. But somehow it didn't seem the right time for a history lesson.

So instead, he asked his cousin, "Is your commemoration of the Holocaust really important to you?"

"Absolutely," came the reply. "The Holocaust underlies our very identity as Israelis and as Jews."

The American weighed the wisdom of actually saying what he wanted so to say. He decided the blood-bond was strong enough to handle it.

"Will you expect your children to pay its memory the same respect that you do?"

"Will you expect your children to pay its memory the same respect that you do?"

"To feel the same sorrow, to have the same determination that you do?"

"Of course," the Israeli replied. "My generation will see to it that our children recognize the importance of the Holocaust, how it defines their identity, how important it must continue to be to all Jews."

"And will you expect them, in turn, to transmit the same conviction to their own children -- and theirs to theirs?"

"Absolutely. Forever. To us it is that important."

The American swallowed hard, then spoke.

"Like the first attempts to destroy our people and its faith were to our own ancestors? Why don't we remember the Inquisition today? Do we really need a new Holocaust every few generations in order to remember? We already have a day: Tisha B'Av."

Nothing else was said for the moment. The two young men walked back to the kibbutz in silence.

It could well be argued that a large part of what characterizes the Jewish people is our heightened sense of history. Not only of its vicissitudes and tragedies for our people, but, most importantly, of its seminal Jewish moment, the unequalled event that bequeathed us our mandate to cherish, study and observe the Torah -- the revelation of God to His people.

Whether a Jew rejects the divine origin of the Torah (or simply lacks the background to have given the issue much thought), what he denies, or is oblivious to, is an historical fact -- the mass-witnessed and painstakingly transmitted event at Sinai that lies at ground zero of the Jewish people and the Jewish faith.

The day of Tisha B'Av is, in essence, the keeper of Jewish history, recent and ancient, entrusted with the mission of sharing the memory of the Jewish past -- both its nadirs and its apogee -- with all our fellow Jews.

We are fast approaching the day when all testimony of the events of Nazi Germany will be indirect, arriving only through books and films, or third-hand accounts.

One thing is certain, however: The memory of what happened during those years will endure. Because there will always be Jews determined to hold fast to the entirety of our history, to remember the horrible details of Jewish Europe's destruction.

And of the revelation 3,300 years ago in the Sinai desert.

Why Go To Poland?
Lokshen Noodle Kugel Recipe
G-d Time
Shavuot is The Holiday of Cheesecake and Blintzes
Comments