Bring Us to Our Borders in Peace 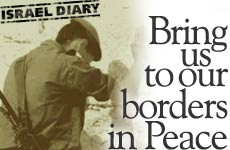 "There is an undercurrent of tension. I am all too aware that, not so far away, Jewish police officers and soldiers are putting their lives on the line to protect Israel."

Do not be afraid, Jacob, my servant; do not be dismayed, Israel, says the Lord. For I will bring you home again from distant lands, and your children will return from their exile. Israel will return and will have peace and quiet in their own land, and no one will make them afraid.

Jerusalem -- At the movies on Saturday night, the cell phones of the group of young Israeli guys went off in sequence. In rapid succession, each of the 22-year-old guys sitting next to my friend, Gidon, and me were called by the Israeli Army to report for duty.

When the riots rocking Israel broke out before Rosh Hashanah, I felt selfish and guilty for being relieved that Gidon had finished his three weeks of annual reserve army duty a week or two prior. As the group sitting beside us decided whether or not to stay through the end of the movie, Gidon and I figured that he wouldn't be called up, that there were younger, more experienced soldiers better able to defend us.

At 2:30 a.m. that night, as we talked outside my apartment building, his cell phone rang. I wondered why his mother would call in the middle of the night.

But it wasn't his mother. It was the army telling him to report to his reserve unit's base in the Judean desert south of Hebron.

I stared at him, unbelieving, knowing that he is too kind and good to play this sort of joke on me. Even though he seemed outwardly calm, I could see the uncertainty in his eyes.

Since the riots began some two weeks ago, the strangest thing about life in Jerusalem is how normal things seem. The daily routine continues in my sleepy Jerusalem neighborhood. People drop their kids off at school, go to work, come home.

When my friends and family call in a tissy of worry, sure that I must be ducking gunfire to get to the corner store, I have to reassure them that what they see on TV isn't happening near me.

Still, there is an undercurrent of tension. I am all too aware that, not so far away, Jewish police officers and soldiers are putting their lives on the line to protect Israel and, well, me.

Over Rosh Hashanah, Gidon and I were trapped in a Jewish community in what the media calls "The West Bank." On the second day of the holiday, rumors were flying around the community about how the rioting had escalated. I was less worried about my safety than I was about whether or not my mother -- spending the holiday with my sister and triplet niece and nephews in San Diego -- had heard the news. I can handle my own fears, but handling my parents' anxiety is something else entirely.

ALONE IN A WAR ZONE

People frequently ask my mother if she worries about her daughter living in Israel. "Nah," she habitually replies. "She's safer in Jerusalem than at home." She then tells the inquirer how, without a second thought, I walk home alone from friends' homes at 1 a.m. Shabbat nights.

But this week, she asked me to be sure I walked home with someone. My mother, all of 5'2", is one fierce woman. She is proud that her daughter chose to live in Israel, to live out the religious and Zionist commitments she and my father instilled in me as a child.

But hard times are when commitments are tested.

My father and brother remind me that if I want to leave Israel I can stay with either of them. My father offers to pay for the plane ticket. My brother insists that I tell him what my "contingency plan" is, if things heat up to the point that I want to go home.

But this, the Jewish homeland, is my home.

On the day before Yom Kippur, I asked my mother to forgive me for moving so far away from her and causing her to worry.
"I don't forgive you," my brave mom replied. "But I am proud of you."

At 6:30 a.m. this morning, friends from United States started calling to see if I am all right, expecting me to answer the portable phone in a foxhole.

Emotionally, though, I feel that my world is upside down.

Three soldiers have been kidnapped by a terrorist organization. The Tomb of Joseph, he of the many-colored coat, has been firebombed and desecrated. We hear that his grave is being turned into a mosque; that the body of Hillel Lieberman has been found, brutally murdered, leaving behind 7 children.

My friends in the army complain that they are trying to defend themselves even as they're instructed to minimize any sort of force. And the world community condemns Israel for using too much force. The reports I hear from my friends and family bear no resemblance to the reality I am living.

But I kept a level of detachment until this unfamiliar fire swept up my dear friend. He should be building a sukkah at his apartment this week. Instead, he's in a bullet-proof vest, guarding a Jewish community in the Judean desert.

But there is a lesson in that. The sukkah, the temporary huts we dwell in for seven days, that he should be building is a reminder that, whatever permanence we think we have, God is the only truly dependable thing in the world. Ultimately God is our Protector.

BLESS US WITH PEACE

Everyone asks me, "What will be." I have no idea. Maybe a war. Maybe more tension, then a return to normalcy. Maybe another series of roundtable discussions. Maybe another mere footnote to this young country's history, and the long history of the Jewish people.

Everyone wants to know what they can do. Our tradition teaches that a united Jewish people cannot be defeated. We are all responsible for one another.

Whether in Jerusalem or Boston or London, we can all pray for the safety and welfare of the soldiers and citizens of Israel, for the safe return of the three soldiers who are hidden away somewhere. Give charity on their behalf.

May the Creator of the World to bless his nation, the Jewish people, with peace.

"Jerusalem Diary" is a forum where people across the spectrum can express their thoughts and views on life in Israel. The opinions expressed in this column are solely those of the author. Submissions should be sent to: submissions@aish.com.

The Candle of God
Is Grease the Word?
Dried Fruit Compote
Scientific Curiosity and the Divine Encounter
Comments
MOST POPULAR IN Israel
Our privacy policy
Aish.com Is Looking for Great Writers