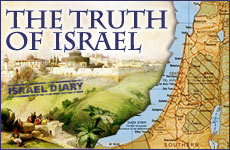 A Jew living in Israel has to keep the faith. It is more difficult when surrounded by a sea of falsehood.

Israel is not a normal "state." It is a state of being. A land with a vision. An idea, an ideal. A land one can rarely live up to, for what mere human can "live up" to the expectations of the Eternal God? The real trial is simply to keep trying. And we do.

In the face of what the Sages call an almah d'shakra (Aramaic for “world of falsehood”), a world which announces, insists, repeats and screams that we -- the most pacific, the most merciful, the most moral of all peoples -- are conquerors, criminals, sadists, interlopers, fascists, racists, warmongers and evil, we continue to live, love, learn, study, build, be merciful, attempt to be righteous and to search for truth.

Who can measure the superhuman strength and abiding faith the Jewish people have dedicated to enduring tidal waves of misunderstanding and suspicion (at best) or pure, unadulterated hatred (at its worst) and to keeping faith that there is indeed good and truth in God's world? Ani ma'amin -- we continue to believe and insist that yes, the Jewish people is indeed a Chosen People, guardians of that which is good and moral, right and true, and that the Land of Israel is our God-given home. To remember that this home was taken from us, forcing us into exile and two millennia of wandering. We continued to remember, never to forget or to abandon it, or to lose faith that someday, somehow, we would return.

No other nation ever succeeded in making this seemingly forsaken patch of ground blossom.

We must appreciate what it means that no other nation, no country, no people ever succeeded in making this seemingly forsaken, parched patch of ground blossom. That no one ever struck roots or created a viable, lasting home here. Conquerors came and went, blown away like leaves from yesteryear. Their ruins dot the landscape. Mark Twain, in a marvelous travelogue of his trip to the Holy Land visited Palestine (so named by the Romans in 135 CE, after the ancient Philistines, in an effort to erase the "Jews" and "Judaism" from Judea, which is what the country was called at the time of the Roman conquest, a full 500 years before the first Arab arrived in the 7th century Arab conquest.)

Almost 2000 years after Roman rule, Mark Twain found a barren, empty, desolate country with a small, impoverished, scattered population. No one called themselves "Palestinians." Under Ottoman rule, Palestine was considered a section of southern Syria which roughly included today's Israel, Jordan, Syria and Lebanon. The Arabs in Palestine considered themselves part of the greater, general Arab nation. As a child, I remember my mother, a dedicated Hadassah member, working for "Palestine" and the "Palestinians" -- i.e. the Jewish inhabitants of the nascent Jewish state. The Jerusalem Post was called the Palestine Post; the Israeli Philharmonic was the Palestine Philharmonic.

...the world is still not convinced that the people of Israel have a right to the Land of Israel or that Jerusalem is truly the capital of the Jewish state. The Jewish State is still defending its legitimacy while the newly founded Palestinian (i.e. Arab) nation is universally recognized and has won the endorsement (if not always the love) of the world. Bombarded as we are with falsehoods, it is almost impossible to tell the difference between truth and falsehood, between right and wrong.

The almah d'shakra -- the World of Falsehood -- is alive and well.

Living in Jerusalem with friends and relatives across the length and breadth of the country -- in the army, on so-called "settlements" (half of the neighborhoods in the Jerusalem municipality are referred to by Arabs as "settlements"), in cities and towns and moshavim -- I am, like most Israelis, fairly well informed. Israel is like a small town and important news travels across the country almost instantaneously via radio and telephone. Yet when I read what the Arabs have reported, it is so outlandish and ludicrous that one doesn't know whether to laugh or cry:

“The Jews are spreading the Aids virus in medicines.” (Try telling that to the thousands of Arabs who get treatment at Israeli clinics and hospitals.)

“The Jews never had a Temple on the Temple Mount [sic]."

And the Arabs somehow believe every word they say.

The almah d'shakra -- the World of Falsehood -- is alive and well.

But the truth is different. Emet -- truth -- is God's divine signature. So even if the world has not yet learned to identify the divine hand in history, God's people are destined to read His message correctly.

L'Chaim - to Life, L'Emunah - to Faith, and L'Emet - to the Truth... to the still fledgling Jewish State, to the ancient Jewish land, and to the eternal Jewish People. And to the rest of the world as well.

The Incredible Corona Wedding Outside Our Window

Still Crazy: Why We Made Aliyah
Is Grease the Word?
Dried Fruit Compote
Scientific Curiosity and the Divine Encounter
Comments
MOST POPULAR IN Israel
Our privacy policy
Aish.com Is Looking for Great Writers