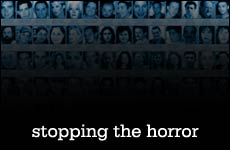 The situation is nothing short of desperate. The time has come to lift our spiritual cataracts.

There are the victims. Their profiles vary.

One served falafel and chips for twelve hours a day on King George Street; another worked for the Wall Street Journal. One was a retired baker from Emanuel; another just began eating solids. One was a Bucharian Jew, struggling to find a new home; another was a 12-year-old boy of American descent, awaiting his Bar Mitzvah. One was a young mother vacationing in the Grand Canyon; another sold securities on the 96th Floor of Tower # 2. Their fate was tragically, the same.

There are the perpetrators. Their profiles vary too.

One was from Fatah; another from the Tanzim. One was a cowardly sniper; another was a woman. One claimed allegiance to the Al-Aqsa Brigade; another waved the flag of Islamic Jihad. Their goal, tragically, was also the same.

And then there is us. You and me...and millions like us. The witnesses. Our experience over these past terror-filled 19 months does not vary very much. No matter where we live, we sit, glued to the media, afraid for our lives, and bewildered...totally bewildered. The questions never seem to cease.

"What was today's count?"
"Where did it happen?"
"How about the wounded?"
"When will this nightmare end?"
"What did Sharon say? Bush? Powell? CNN? Krauthamer? Friedman?"
"WHAT CAN WE DO?"


It's like we've been transported to a dreadful, evil planet, on loan from the demented mindset of the creator of an old Superman comic book -- where the prisoners have taken over. We feel like we're trapped in some kind of heinous Groundhog Day existence, spiraling in an abyss of helplessness and vulnerability. The faces may change, but the headlines stay the same.

And so, the saga continues. Pain, tragedy, grief...and more pain.

DOESN'T ANYONE HAVE SOME ANSWERS?

Maybe it is time to face a very difficult realization. And that is that the solutions we have tried, and those that we are most familiar and comfortable with, will never, ever, ever be successful. That means all the brilliant military, political, diplomatic and logical solutions to this perilous state of inhuman dread will never, by itself bring about its conclusion.

How much longer will it take us to accept this stark reality? How many more lives must be maimed or dismembered before we finally surrender our fantasies of resolution only via mind or might? Sadly, we keep bringing our legendary stubbornness to new heights, with our most recent inflexibility of admitting our powerlessness to stop the Kamikaze mentality and strategy.

The truth hurts but let's face it. Begin and Shamir couldn't solve the problem and Rabin and Peres were no more successful. Netanyahu failed, so we tried Barak for a while. When his efforts proved futile, we turned to Sharon. Guess what? New faces -- same results. Each one brought his own brand of guile and smarts to the table, but each one was turned back, thus far unsuccessful. Harsh truths -- but undeniable, nonetheless.

I look back on the months that have past and I find just one single statement to have been completely on target regarding this tortuous conflict. It was a proclamation made by Prime Minister Sharon, after a flurry of deadly incidents a few months ago. He finally became convinced that Arafat could be officially declared "irrelevant." What he meant, of course, was that Arafat could no longer be considered a "player" in any future negotiation effort. He had "crossed the line," and was now deemed to be without portfolio or power. This was an accurate assessment, but not really "on target."

Inadvertently, however, Sharon had actually stumbled on the first truism of his political life. He was right. Arafat was, indeed, irrelevant. But not for the reasons he thought. Arafat was irrelevant because Arafat, in the greater scheme of things, is irrelevant! As a matter of fact, so is Sharon. He too is, basically irrelevant! As is Bush, Cheney, Powell, Rice, Rumsfeld, Zinni and all the rest of the protagonists in this tragic real-life drama. They all don't really matter.

In fact, there are only two truly relevant "players" in this configuration -- God and the Jewish People. That is it. Everyone else is just part of the cast. From Bush to Bin Laden, and everyone in between. And like all good actors, they do seem to be very real; but they're not. As the wisest of all men, King Solomon, said: "The heart of rulers is in the hands of God (Proverbs 21:1)."

This is, by no means, to suggest that those in positions of power and decision- making should just pray to God, eat strictly kosher food, keep the Shabbos and hope for the best. Our world always requires a response that is consistent with the natural order of life, as we know it. Even our forefather, Jacob, when confronted by the enemy. devised military strategy in conjunction with his prayers, And so, decisions…responsible ones…still need to be made. And we have a duty to support those decisions or demand change, as we see fit.

Naturally, there are heroes and villains and twists and subplots in this horror picture, but the plot and the characters are all creations of the infallible "director" above. He writes, He produces, He casts, and He directs. The production is called, "God and His People." We may not like the circumstances very much, but it is about time we realized what this story is all about. The story is about us. And the amazing thing about this particular creation is that while most of the main characters are just messengers of God's will, we can actually...literally...change the script as it is being written.

I realize that this concept is probably not particularly new. In the back of our minds, we probably all reserve some space for the possibility that God truly runs the world; not kings, presidents, prime ministers, or terrorists. But the fact is that we are human...and we forget. We see the enemy blow up our neighbors and naturally, we are revolted, and filled with hate. We hear our leaders respond with rhetoric and ineptitude and we are frustrated beyond belief. We read the sage opinions of the great intellectuals of our holy periodicals and we reaffirm the drivel that Plan A or B might really solve the problem once and for all. Such is not the case.

The time has come to lift our spiritual cataracts. The only way this script is going to change is if we resolve to do something about it. And I'm not talking about Oslo, the Saudi plan, or all-out war. And if this sounds like some clarion call to Jews around the world to repent and make serious alterations in their lifestyles, well...that's exactly what this is. Judgments, military or otherwise, will need to be made. But let's not distract our focus from our most powerful sphere of influence.

Forgive me. If my plea for change smacks of any trace of "holier than thou" oratory, that is not my intention. But the situation is nothing short of desperate. If you don't believe that, just ask the surviving patrons of the Moment cafe in Rechavia or yesterday's bystanders on the bullet-filled boardwalk in Netanya.

It can be no clearer than it is already. God is waiting, hoping, pleading, and screaming for His People to live the way they should. Simply put, each of us needs to bring more of God into our lives; in prayer, in trust, in charity, in the way we eat, talk, think, and relate to each other. The list is great, but the need is greater.

Truthfully, each one of us knows much of how we can improve our own lives. For some of us it lies in our dedication to teach others what we already know and understand, no matter how insignificant it may seem. For others, it is our commitment to learn more about what we should and should not be doing. Some of us are critically lacking in our relationship with God himself, while others need to acutely change the way we view our fellow man and woman. Everyone must take stock of his own portfolio...and then begin the process of change.

But it is only when we stop vilifying our leaders, solely blaming our enemies, and worshipping the media...and begin to seriously look at ourselves, that this madness is really going to stop. Nothing else has -- or will -- work.

The time has come.