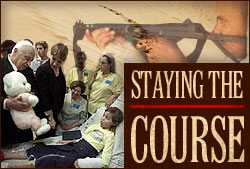 A leading Jewish journalist views the Mideast conflict from other side of the Atlantic.

Courtesy of the Jewish Week (thejewishweek.com)

When I read a report the other day that Israeli intelligence experts are preparing for several more years of Palestinian warfare, I felt like I'd been punched in the stomach. I can only imagine how Israelis reacted to the prospect that they and their families may be targeted for murder on a daily basis for years to come. How do you live a normal life in the face of ongoing terror? How do you find the strength to go on without at least the hope of peace with your neighbors?

It's beyond depressing, it's demoralizing. And that is precisely the goal of the Palestinians, who seek to destroy Israel, not militarily, but psychologically, by weakening the resolve of the Jewish state. The question, dare it be asked, is whether they are succeeding.

The Palestinians are banking on the belief that Israelis cannot withstand shooting attacks and suicide bombers for an extended period of time. They were heartened by Israel's withdrawal from Lebanon in May 2000, seeing the move as a defeat for the Israeli Army and a national sign of weakness that proved Israelis will retreat for the prospect of reduced violence.

Palestinians seek to destroy Israel, not militarily, but psychologically, by weakening Jewish resolve.

Palestinians look back on the first intifada, which began in late 1987 and lasted several years, with great pride, a time when they received international recognition and empathy for taking on the proud Israeli army with little more than rocks and stones.

Israelis may see things differently, noting that the intifada dissipated when the Palestinians could no longer carry on the street fighting, and that the violent venting led to the Madrid talks, the beginning of the peace process, as Arab and Israeli representatives sat down together to negotiate an end to the state of war.

Of course the peace process has been shattered and it should be noted that the primary weapons for young Palestinians at the time of the first intifada were stones; today, thanks to the Oslo Accords, tens of thousands of “policemen” (read soldiers) have been armed with weapons, and they are far more organized now, through the Palestinian Authority.

Israelis as a whole, from Prime Minister Sharon to the embattled residents of the communities in Judea and Samaria, have shown remarkable restraint and courage in the face of bloodthirsty behavior on the part of the Palestinians. The army, which has targeted the leaders and masterminds of the killing rather than civilians, and the security and intelligence officials who have been able to thwart countless would-be suicide bombers, deserve high praise.

But there is reason to worry that the younger generation of Israelis does not have the passionate sense of Jewish history, national mission and Zionist commitment that its parents and grandparents had. Do younger Israelis lack the faith of their fathers? Some see Israelis in their 20s as the soft underbelly of Israeli society, raised in relative prosperity and lacking the moral discipline, Jewish education and concept of heritage of their forbears.

Some see young Israelis as the soft underbelly, raised in prosperity and lacking moral discipline and Jewish education.

At a time when post-Zionist ideology suggests that Jews feel guilt for past wars with the Arabs and when most of society is decidedly secular, discounting any covenant between God and the Jews focused on the land of Israel, it is not difficult to see why young Israelis could lose their resolve when faced with a seemingly endless struggle with the Arab world.

Palestinians are counting on Israelis to act as spoiled, guilt-ridden interlopers, preferring to lay down their arms rather than their computers. But the Palestinians are overplaying their hand. First, leaving Lebanon is not at all the same for Israelis as abandoning their own land. And Yasser Arafat has galvanized the Jewish population like no Israeli leader ever has.

The Palestinians have lost their façade of reasonableness these last 11 months, if not before, celebrating the deaths of innocent Jews far from any battlefield, sending their own youngsters to the frontlines, and praising as heroes those who believe they will receive eternal gratitude, here and in heaven, for taking the lives of Jewish children. That is too much hatred for Israelis to ignore.

It is too much hatred for Israelis to ignore.

The next stage of the conflict is unclear. Ariel Sharon may indeed be preparing the quick, harsh military response an increasing number of Israelis are calling for, a multi-pronged battle intended to end the armed threat from the Palestinians and perhaps send Arafat packing. And there is more talk every day of a unilateral move on Israel's part to determine her own boundaries, giving up about 20 percent of the Jewish settlements, and hunkering down in a protective mode until such time, if ever, that the Palestinians choose to negotiate a real peace.

Then again, the government in Jerusalem may be preparing to ride the intifada out for fear of widening the scale of the conflict.

Whichever scenario comes to pass will require great inner strength, resolve and dedication on the part of Israelis, who must believe in the rightness of their actions to give meaning to the inevitable sacrifices that will be required. And we must show them every means of support possible. It is, truly, the least we can do.

Why Does America Spend So Much on Israel?

The Roots of Jihad
Should I Break Up, Get Engaged or Keep Dating?
Time Is Your Precious Commodity
A Constant World in Flux
Comments
MOST POPULAR IN Israel
Our privacy policy