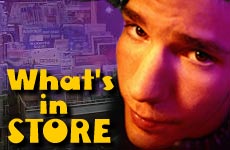 I may be only 15 years old, but there's plenty I've learned about life from working in a store.

I am only 15 years old but I have dealt with many types of people. Since I work in a store where it is very important to be nice to customers (and employers), I've learned how to behave in different situations.

One afternoon I was in middle of straightening out the shelves when the phone rang. I picked up and answered in my monotone, "Joe's Hardware, can I help you?" The person on the other line asked to speak to the owner, Mr. Smith. I put her on hold and went to the back of the store where Mr. Smith was in middle of adjusting the inventory.

I told him that Mrs. X was on the phone for him. He told me that I should tell her that he was busy and she should call back tomorrow.

When I relayed the message, the irate customer began screaming. "I am going to sue you! Put Mr. Smith on the phone NOW!"

Since she was planning on taking up a phone line we might as well talk about something interesting and I asked her what she would like to chat about.

I calmly told her that no matter how much she yelled Mr. Smith still wouldn't come to the phone. She huffily told me that she isn't getting off the phone. I suggested that since she was planning on taking up a phone line we might as well talk about something interesting and I asked her what she would like to chat about.

Eventually she hung up and called back the next day when she was able to speak to Mr. Smith.

Another time Mr. Smith was again dealing with inventory when a man wished to speak to him. Mr. Smith told me to either take a message and he would call him back the next day or the man could try again later. When I told the customer what Mr. Smith had said he started calling me names. I was so flustered that I handed the phone to Mr. Smith and he spoke. I know that I shouldn't have rewarded him but it was just so unbelievable that a grown man would call a 15-year-old boy a "twit."

In the store I was also threatened by a homeless man whom I escorted out. In a separate incident, an older man, who wanted to go to the back room which is for employees only, also tried to attack me. In the first case, I solved the problem by swiftly pulling out the phone and dialing 9-1-1. The second was a little more difficult. I had to call another employee and he took care of him.

From these stories and other similar events I have learned a lot about dealing with customers. You have to stay calm. Getting angry won't get you anywhere. In fact, they'll just get more frustrated and even angrier. You also have to be flexible -- you have to bend over backwards a little but not too much. Even though it may not be the easiest thing to do, you can never lose your cool. The Torah teaches us to look at every situation as a chance to work on our character. If I would take full advantage of these opportunities, I would be a very patient person by now! Not to mention having my frustration in check.

I also have to deal with my employer, and that's a whole different can of worms.

I also have to deal with my employer, and that's a whole different can of worms.

My boss is not very organized and I usually don't get my paycheck on time. This is by far the most annoying thing there is. I can't even begin to describe for you the countless occasions where I have been promised my money and I didn't receive it.

Once before the summer started he owed me $500. I was planning on going to camp for the first half and I wanted to get paid. I went over to Mr. Smith and asked for my wages. He said that he could only pay me $250 now but next week, when I was in camp, he would give me the rest. I naively agreed.

Three weeks into the summer he still hadn't given my mother the check and I was pretty aggravated. I called him and he apologized and told me he would take care of it. When I got back from camp I still didn't have my money. The next day I went straight to work and started yelling at him. He profusely apologized and reached into his pocket and paid me.

Another time he owed me $624 and again he said it was too much but he would give me one check now and one check postdated. I asked him for the checks and he said he forgot them at home but he was coming back later that night and he would put in my mailbox.

At 12:30 a.m. I was still up so I decided to check my mailbox. Surprise, surprise. It wasn't there so I called his cell phone. He was still at work but he promised it would be there the next morning. Reassured I went to sleep.

When I awoke at about 9:45am (one of my earlier hours!) I immediately went to the mailbox -- but it wasn't there. I called him and again I blew up. He drove over to my house and gave me the checks.

I know that both times I was wrong for blowing up and losing my temper, but it was extremely hard not to. Now I understand why the Torah mandates that an employer must pay his workers wages before sunset. Before theses incidents I thought, "Who cares when they are paid, today, tomorrow, as long as they get paid don't worry about it." Only now do I truly understand the wisdom of the Torah.

I think that the way you deal with your employer is the same as dealing with customers. With your employer you have to stay calm but on the other hand be strong. Don't give up. Be afraid, but not too afraid.