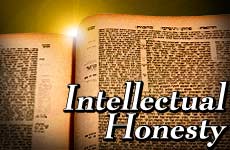 Acknowledging and admitting one's limits is a sign of greatness, not weakness.

One of the hallmarks of our great Torah scholars throughout the generations has been the uncompromising loyalty to the concept of intellectual honesty in their writings and commentaries. One would almost take this for granted, for the subject that is being dealt with is Torat Emet -- the Torah of Sinai itself, that to Jews represents ultimate and eternal truth and honesty.

Nevertheless, the temptation to falsify, exaggerate, deny, plagiarize and even commit forgery is a well-known affliction in general academic circles. As such, the unswerving path of intellectual honesty that one finds in the writings of the great Torah scholars is exemplary and inspiring.

The Talmud is replete with incidents of great men who said, "I was wrong," or "I do not know." In fact, it is the mark of intellectual greatness to be able to retract previously strongly held opinions, and as well, to be able to say that one does not know everything. The temptation of scholars, because of their vast knowledge, is to maintain that they know everything. And therefore, they fall into the trap of leaving no question unanswered and no query ignored.

The great Jewish legend relates that two outstanding scholars, each of whom had written a great work on the same subject of Torah law, once met. One of the books had achieved instant and wide acceptance in the scholarly world, while the other lagged far behind, even though in terms of brilliance and knowledge its author was equal to his colleague.

I spend an hour erasing some of what I wrote during the day.

The disappointed author asked the other scholar to review with him his daily schedule of study and research. After hearing the routine of his colleague, the man exclaimed: "That is my exact schedule as well, so why is your book so much more popular than mine?"

The other man answered: "I neglected to tell you that every night I spend an hour erasing some of what I wrote during the day!" As an erstwhile author, I can testify that it is much simpler to write than to erase one's words.

The great champion of Jewish scholarship, and therefore of intellectual honesty in matters of Torah scholarship, is Rashi -- Rabbi Shlomo Yitzhaki. This towering figure in Jewish life, who lived in France close to 1,000 years ago, composed the basic commentary to the Bible and the Talmud, which has remained as the basic commentary to these books of Jewish faith until this very day.

Rashi's commentary to the Bible states 77 times: I do not know what this means.

Now Rashi could have just ignored the word, phrase or idea in question and continued with his commentary. But that would not have been intellectually honest, for it would leave the student of Rashi with the impression that the matter was so simple or obvious that it required no explanation. Rashi therefore steps forward and advises us that he does not know the word, phrase or idea that appears in the text, and we are therefore warned that there is a problem facing us.

That intellectual honesty is what makes Rashi the eternal teacher of the Jewish people.

In the 19th century, with the rise of "enlightened" scholars and "Biblical Criticism," the standards of intellectual honesty in the Jewish world were compromised. Books that were out-and-out forgeries were attributed to great scholars of past ages. Emendations of texts in the Bible and other books of Jewish faith became the rage in the world of "enlightened" Christian and Jewish scholars. However, by now, most of these shenanigans have been consigned to the ash heap of history, while Rashi and his colleagues in faith and truth continue to lead the way to a vital understanding of our Torah, its words and values.

How Michael Chabon Ambushed My Graduation