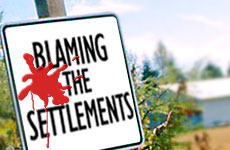 It's all because of the settlements? Don't you believe it!

Courtesy of The Jewish Week

Inevitably and incrementally, the notion is being advanced that the root cause of the Israeli-Palestinian conflict is the existence and growth of Jewish settlements in the West Bank and Gaza.

This viewpoint is historically, logically and morally false, and should be challenged strongly, whether or not one believes the settlements ultimately are beneficial or harmful to the Jewish state.

Anthony Lewis, in his New York Times op-ed piece Sunday titled "Danger To Israel," takes up the cause, describing the settlements as "a crucial obstacle to a resumption of meaningful peace talks" and "a mortal threat" to Palestinian hopes for an independent state.

He mentions, but brushes off with no explanation, the fact that Yasir Arafat could have had a Palestinian state "with most of the settlements gone by saying yes to Prime Minister Ehud Barak's proposal for final resolution of the conflict" at last summer's Camp David summit.

Instead, Lewis concludes that Israelis increasingly recognize the settlements as a threat to their interests, and he calls on the Bush administration to "push hard" for the solution proposed by the Mitchell Commission.

That commission was charged with investigating the causes of the rioting in Israel that broke out in late September 2000, and have escalated ever since.

Chaired by former U.S. Sen. George Mitchell and comprised of another former senator, Warren Rudman, who is Jewish, and three European diplomats, the commission did not fault either side completely for the outbreak of the violence.

The report, like the U.S. government and media, engaged in moral equivalency.

But typically and infuriatingly, the report, like the U.S. government and media, engaged in moral equivalency, concluding that the prime responsibility was Israel's for not withdrawing unilaterally from the West Bank, using "excessive" response to counter Palestinian aggression and for the very existence of the settlements.

What begs reporting is that the Palestinian violence was a planned and orchestrated response to last summer's Camp David peace talks.

After Arafat refused Barak's overly generous offer for a Palestinian state, including Jerusalem and without most of the settlements, he decided the only way to improve on that offer was to have the international community step in and force Israel's hand.

And as Palestinian leaders have subsequently acknowledged, they sought to accomplish this by setting off a new round of war.

Some Israelis were so relieved that the report did not blame Ariel Sharon's provocative visit to the Temple Mount for causing the Arab riots that they failed to criticize it for its ultimate recommendation, calling on the Palestinians to cease their attacks and for the Israelis to "freeze all settlement activity, including the ‘natural growth' of existing settlements."

Implied here is an acceptance of the Palestinian argument that since they are opposed to and infuriated by the existence of Jewish settlements in the territories, the settlements are the underlying cause of the latest war of attrition on Israel.

And thus it follows that the formula for renewing negotiations between the parties is a complete cessation of Palestinian violence and a complete freeze on Israeli settlement activity.

But this quid pro quo makes no sense and flaunts recent history.

What goes unmentioned is that the Oslo Agreements, the 1993 basis for Israeli-Palestinian talks, spelled out clearly that violence was forbidden as a negotiating tool.

The accords were founded on a Palestinian renunciation of terrorism and violence, and a recognition of responsibility "over all PLO elements and personnel in order to assure their compliance, prevent violations and discipline violators."

What's more the agreement stated plainly that Israeli settlement growth was permissible and was to be dealt with in permanent status negotiations.

What happened over the next eight years, of course, is that the Palestinians did not live up to the agreement, insisting in textbooks, through the media, mosques and domestic speeches — largely ignored by Washington and Jerusalem — that Israel was the enemy, not a partner in coexistence, and that Oslo was but the first step toward Arab victory over the Jewish state.

All of this became most clear after Arafat rejected the Barak offer and went to war, placing children on the front lines.

Rather than blame the Palestinians, however, the Mitchell Commission calls on Israel to reward the violence, and the abrogation of Oslo, by putting a freeze on all settlements, as if they are responsible for the bloodshed.

If the settlements were the only targets — militarily or politically — of Palestinian attacks, perhaps the Mitchell recommendation would make some sense. But the battle is being waged from Jerusalem to Kfar Saba, with mortar attacks well inside Israel's borders.

And the battle cry is to kill the Jews, to deny the Holocaust, to negate a Jewish connection to the land. (One wonders how the Jews could have been responsible for the death of Jesus if they didn't live in the land of the Bible.)

It is all well and good that the Mitchell report calls on Arafat to undertake a "100 percent effort to prevent terrorist operations and to punish perpetrators."

Problem is, he promised to do that in 1993, under Oslo, and never did. Why, when he sees that there is no downside for violating agreements, should he start now?

Over the last seven months Palestinian hatred has escalated from butchering unarmed Israeli soldiers in Ramallah to targeting babies and stoning 14-year-old boys in Tekoa.

To attribute such unrestrained violence to anger over Jewish settlements, which take up 1.5 percent of the West Bank land and did not exist in 1964 when the PLO was formed to eradicate Israel, is to continue to ignore the true root cause of the Palestinians' violence: an unwillingness, based on religion and ideology, to accept the reality of a Jewish state in their midst.

Only when the world is prepared to recognize the real problem, tragic as it is, can there be any hope for a real resolution.

The Dishonesty of “The Gatekeepers”