Durban: A Circus of Calumny 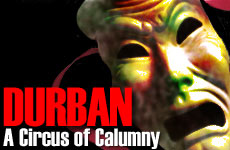 By means of the disgraceful conference in Durban, history has given us, the Jews, a sign. And we had better learn how to decipher it.

The conference in Durban will go down in history as an enterprise of disgrace. Instead of being an important international conference that expresses goodwill, the conference has been turned into a circus of calumny.

What began as an idea for a world gathering against hatred has turned into a meeting of hatred characterized by wickedness. I was supposed to have been there. Both Kofi Annan and Mary Robinson did their utmost to persuade me, particularly in light of my membership on the small board of "very important persons" that the UN established to help with the preparations. But after I read the work papers, I quit.

Anti-Semitism, the oldest form of racism against a certain group in the world, did not appear in the program. What did appear was something about "holocausts such as the ethnic cleansing of the Palestinians by the Israelis."

Mary Robinson phoned me a number of times. I had lunch with the UN secretary general, whom I have known for years. I explained to both of them why I could not take part in this event, which is so infuriatingly anti-Israeli and anti-Jewish.

They said they would make changes in the phrasing, but the problem was with the content. I warned the UN secretary general that the conference and the manner in which it had been prepared would go down in history as a moral catastrophe of the political and social behavior of the world's nations. All that because the content was wholly unadulterated hatred and cruelty, whose expressions ought to outrage any decent and cultured human being and cause them to behave as did American Secretary of State Colin Powell and his colleagues. They deserve praise and support for their courageous response. The American and Israeli delegations left; others did not. If only the European and South African delegations had learned from them. Their explanation is that they would work from within to issue another draft of the resolution. It is too late. The damage has already been done.

Hatred is like a cancer. It spreads from cell to cell, from organ to organ, from person to person, from group to group. We saw it in action in Durban. Even a man of the stature of Kofi Annan somehow lost his way and said things that were inappropriate for him.

The conference in Durban will be remembered as a forum that was governed not by anti-Israelites but by anti-Semites.

With the scandal of Durban in the backdrop, how can the world expect of Israel to trust the United Nations? And how can good people, idealists, have faith in the UN's mission to unite countries in an atmosphere of respect?

The conference in Durban will be remembered as a forum that was governed not by anti-Israelites but by anti-Semites. The fact that militant Palestinians hate Jews -- that is known already. One needs only hear the various Islamic leaders and read the books printed by the Palestinian Authority: They preach hatred and violence, not against Zionists but against Jews. Their slogan, naked and brutal and identical everywhere, was keenly felt and even heard in Durban: "Kill the Jews."

What is painful is not that the Palestinians and the Arabs voiced their hatred, but the fact that so few delegates had the courage to combat them. It is as if in a strange and frightening moment of collective catharsis, everyone removed their masks and revealed their true faces.

By means of the disgraceful conference in Durban, history has given us, the Jews, a sign. And we had better learn how to decipher it.