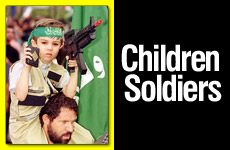 How tragic that Palestinians send their children at risk of death, and then cynically use this against Israel to win world sympathy.

see photos of Palestinian children on the front lines

Both the international and the Palestinian media have accentuated the tragic fact that Palestinian children have been killed or wounded in the recent wave of violence which has engulfed the Middle East. Has any consideration been given, however, to the question of why these Palestinian children have been exposed to such dangers? Why are they frequently found on the streets, in the front lines of violent confrontations, when they should be safe at home or in school?

There are only two possibilities. Either, as Palestinian spokespersons and spin-doctors would have us believe, Israeli forces have been willfully and unabashedly targeting innocent Palestinian children, intentionally seeking them out and murdering them. Or these children are being deliberately taken out of their homes, schools and playgrounds and being sent to the streets, alongside Palestinian rioters, snipers and terrorists -- with the express purpose of placing them in the line of fire in a calculated play for world sympathy.

We all know which of these two possibilities is more likely. We all know who stands to benefit from the sympathy and the censure that the injury of these children attracts. We all know who needs to deflect world attention from their unwillingness to take the necessary steps to make peace. We all know who rejected American proposals at Camp David as even a basis for further negotiations.

Furthermore, while the Palestinians make sure that the injury of children is captured on film, they are equally active in ensuring that Palestinian atrocities are not. When foreign correspondents are caught filming footage that could show the Palestinians in a negative light, such as the slaughter of innocent Israelis by Palestinian mobs (an act condoned and even encouraged by Palestinian religious leaders) or the destruction of Jewish holy sites, the photographers are beaten up or otherwise intimidated, the film confiscated and destroyed. This is the way that the Palestinians cultivate their media image, by martyring their children and bullying those who dare to tell the truth.

Arafat, who is ruthlessly encouraging the tragic involvement of children in the violence, calls them "the generals of the rocks." He would have the world believe that Israel, with its guns and helicopters, is waging a war against 10-year-olds with small stones. In truth, however, the children are not the generals of this conflict, but, rather, the smoke screen masking the gunmen, petrol-bomb throwers and lynch mobs which have exacted their pound of Jewish flesh, unseen or ignored by the television cameras and the media crews.

Whether the children are seen as the generals of this conflict or merely its cannon-fodder in the Palestinian campaign to discredit Israel, it is clear that the deliberate use of children in armed conflict is entirely against international law. Treaty law currently in force sets the age of 15 as the minimum age for child participation in hostilities, whether directly, by engaging in combat, or indirectly, through an endless variety of other means.

It is largely argued that voluntary enrollment in hostilities is also prohibited, as it amounts to recruitment of impressionable minors by responsible adults. The parties to a conflict are accordingly obligated to prohibit children under 15 from any type of participation in non-international armed conflict.

Ironically, it should be noted that the aforementioned standard seems to be in conformity with Islamic law, which prohibits children under 15 from participating in Jihad.

Moreover, with regard to child civilians, the IDF respects international law regulating the treatment of civilian populations, (including, of course, children) during the conduct of hostilities. These basic principles, mainly enshrined in the Fourth Geneva Convention on the Protection of Civilians (1949), limit the means of injury, distinguish between the civilian population and those participating in hostilities (stipulating that in the conduct of military operations every effort should be made to spare the civilian population) and prohibit reprisals against civilians, their forcible transfer or assaults upon their dignity.

Israel is doing everything in its power in order to limit injury to innocent Palestinian civilians, including children, even as it confronts the widespread wave of violence directed against Israel and its citizens. The time has come to ask why the Palestinians are not making similar efforts in order to protect their own children from harm.

Waiting for an Egyptian Revolution

Why Are There Still Palestinian Refugees?

The "Occupied Territories": A Primer

Amnesty International Claim that Israel Is an Apartheid State Is Recklessly Ill-Informed
The Promise Of The Land
Which Chat Are You On?: Parshas Behar/Lag Ba’Omer
Do You Like Slow-Cooked Food? Thank the Jews
Comments
MOST POPULAR IN Middle East
Our privacy policy