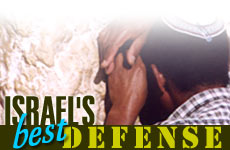 The usual array of pro-Israel activities just doesn't seem to cut it anymore. Here's something that everyone can do to directly affect the situation.

(August 29) - The news, it seems, gives us no rest. Every hour brings with
it another attack, another victim, more tears and more bloodshed. We reach
for the tuner on the radio, like alcoholics grasping a bottle, punch-drunk
from its effects yet unable to free ourselves from its stubborn hold.

With each passing day, the danger facing Israel seems to mount, as does our
frustration. We all want to help, we all want to do something at this
critical hour that will make a difference for our people. And yet, we seem
at a loss as to just what we can and should be doing.

The usual array of pro-Israel activities - contacting one's elected
representatives, combating media bias or even writing a check - just doesn't
seem to cut it anymore. People are dying in the streets, being shot on their
way to work or blown up at the local pizza parlor. There must be something
more, something that each and every one of us can do to directly affect the
situation, no matter who or where we might be.

The key to Israel's victory may very well lie in the words of your heart.

And, in fact, there most assuredly is. However you might define yourself -
be it Jew or Christian, agnostic or simply confused - the key to Israel's
victory may very well lie in the palm of your hands or, more precisely, in
the words of your heart. Israel's best defense is the power of prayer, and
it is time we unleash this weapon with all the fury and determination that
we can muster.

To modern ears, it might sound archaic, even simplistic. But modern
solutions have failed us miserably in recent years, with diplomacy and
statesmanship bringing us all to the edge of the abyss. For all of our
advanced technology and finely-honed military prowess, Israel seems at a
loss as to how to extricate itself from the current impasse. Perhaps it is
time to put aside our cynicism and our doubts, and to do what people in
trouble have always done in their hour of need - turn to their Father in
Heaven and plead for help.

The Palestinians are now openly declaring that we are all potential targets.
The Popular Front for the Liberation of Palestine, whose leader was
eliminated by Israel earlier this week, has warned that "The flames shall
reach every Zionist everywhere." This means that all of us who support
Israel are now effectively soldiers in the battle to save the Jewish state.
And just as there are no atheists in a foxhole, there should be no lips that
remain silent in the current battle.

Israel should launch an international campaign, Operation Shield of David,
which would bring together Jews, Christians, and others to pray on the
country's behalf. The Book of Psalms, written by King David, has always been
one of the most potent weapons in Israel's spiritual arsenal. It is time to
dust off this powerful tool, and to let its words of comfort and succor
resonate across the globe.

If tens of thousands of voices are raised worldwide simultaneously, the
echo will resound, not only through the corridors of power in Washington,
but in the Heavens too.

Synagogues, churches and other places of worship should regularly recite
specified psalms on Israel's behalf, culminating in an international day of
prayer at the Western Wall in Jerusalem. If tens of thousands, or even
hundreds of thousands, of voices are raised worldwide simultaneously, the
echo will resound, not only through the corridors of power in Washington,
Moscow, and elsewhere, but more importantly, in the Heavens too.

Unlike other forms of activism, prayer is something that each and every one
of us can do. It costs no money, does not require a great deal of time, and
allows every individual to express himself in a and highly personal
manner. And prayer has the power to unite us, if only for an instant, in an
uplifting and meaningful experience that transcends our limitations as
individuals and bonds us together as petitioners on Israel's behalf.

Critics will no doubt mock the idea, asserting perhaps that it is a sign of
weakness or even desperation. But when a people finds itself with its back
against the wall (or, in this case, the Mediterranean Sea), no answer should
be so hastily dismissed.

The fact is that for the past decade, we have given politics a chance, and
it has failed us. Now is the time to give God a chance, for unlike
politicians, He can always be relied upon to keep His word.

Jews Aren't Alcoholics and Other Misconceptions about Drinking

If You Were Born a Jew
In the Shadow of David and Goliath
Where Do the Laws of Nature Come From?
Saadiah Gaon, Rashi and Maimonides: How Three Rabbis Revolutionized Judaism
Comments