Senator Feinstein on the Peace Process 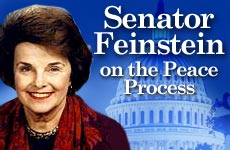 On the occasion of the new Israeli government taking power, U.S. Senator Dianne Feinstein of California, a long-time supporter of the Oslo Accord, gave a passionately pro-Israel speech.

I would like to take a few minutes today to share my assessment of the present situation, where things stand, and what this may mean for U.S. policy in the region. I rise today as one who has supported the peace process, believed that a peace agreement was possible, and who has worked in the Senate, along with many of my colleagues, to see that the United States played an active role in helping Israel and the Palestinians seek peace.

Prime Minister Ehud Barak was elected two years ago to make peace and to bring about an "end of the conflict'' with both Syria and the Palestinians. He was elected with a mandate to complete the Oslo process, a goal at the time supported by the majority of the people of Israel.

Over the past two years Prime Minister Barak tried, heroically and energetically, to achieve a comprehensive peace with both parties.

Indeed, it has been said I believe, that Prime Minister Barak went further than any other Israeli Prime Minister in an attempt to reach a comprehensive agreement with the Palestinians which includes:

The creation of a Palestinian state;

Palestinian control of all of Gaza;

Palestinian control of approximately 94 to 95 percent of the West Bank, and territorial compensation for most of the other five percent;

A division of Jerusalem, with Palestinian control over the Arab neighborhoods in East Jerusalem and the possibility of a Palestinian capitol in Jerusalem;

and Shared sovereignty arrangements for the Temple Mount.

Not only was the Palestinian response to these unprecedented offers "no," but, even as Prime Minister Barak attempted to engage Chairman Yasser Arafat at the negotiation table, the Palestinians took to a campaign of violence in the streets, and threatened to unilaterally declare an independent Palestinian state:

When the violence began, the Fatah's militia, the Tanzim, fired upon Israelis with submachine guns. The Fatah and the Tanzim have been active in the violence -- even encouraging its escalation -- to this day;

Chairman Arafat freed a number of Hamas terrorists who instantly turned around and vowed violence against Israel.

And in reaction, all too often, Israel, too, has resorted to violence in an effort to protect its security and safeguard the lives of its people.

This new Intifadah has been characterized by a level of hate and violence that, frankly, I did not believe possible in view of the extensive concessions Israel had offered.

And it is clear, I believe, that much of this campaign of violence, this new Intifadah which continues to this day, has been coordinated and planned...

As someone who has been a supporter of the Oslo process from the start, I say this with a great deal of regret. And I wish this were not the case. But we have seen Israel make the offer, an historic offer, only to have it rebuffed. The consequences of this could, in fact, be devastating.

In his victory speech, Prime Minister Sharon called on the Palestinians "to cast off the path of violence and to return to the path of dialogue'' while acknowledging that "peace requires painful compromises on both sides.''

He has stated that he accepts a demilitarized Palestinian state, is committed to improving the daily lives of the Palestinians, and has reportedly indicated that he does not plan to build new West Bank settlements.

Whatever happens, there can be little doubt that it will have a profound impact on United States strategic interests in the Middle East. And because of that, the United States must remain an interested party in the region.

I believe that it is critical that both parties need to make every effort to end the current cycle of provocation and reaction, with a special responsibility that is incumbent upon the Palestinian Authority to seek an end to the riots, the terror, the bombings, and the shootings. There must be a "time out" on violence before the situation degenerates further into war.

We can all remember the images, from last fall, of the Palestinian child hiding behind his father, caught in the cross-fire, shot to death, and then the images, a few days later, the pictures of the Israeli soldier who was beaten while in custody and thrown out of a second floor window of the police station, to be beaten to death by the mob below.

It is easy to understand how passions can run high, and frustration and fear can drive violence.

But it is also easy to see how these feelings -- even these feelings, that are based in legitimate aspiration -- can get out of control and lead to ever deeper, and never-ending, cycles of violence.

The Palestinian leadership must make every effort to end this cycle, to quell the attitude of hate that has been fostered among the Palestinian people, and to act to curb the violence, and to convince Israel that they are indeed serious and sincere about pursuing peace.

But until there is evidence that the violence is ending, the United States cannot be productively engaged between the two parties.

And the United States must continue to work together with Israel to strengthen the bilateral relationship, to ensure that Israel has the tools it needs to defend itself, and to enhance security in the region.

There are those who now believe that the Palestinians don't want peace; that, in fact, they want to continue the violence, and force Israel into the sea; to take back Jaffa; to take back Haifa.

There is a segment of the population that believes this is true. But I say, how realistic is this? Can there be any doubt that Israel has the ability to defend itself, and will? Or that should there be an effort to attack Israel, to end this democracy, that the United States would be fully involved? There is no doubt of that.

So the ball is now in the Palestinian court, to show that Palestinians are interested in ending violence and bloodshed. Israel, under Barak, has shown how far it will go to search for peace, much further than I ever thought possible. The concessions offered at Camp David, and after, are testament, I believe, to Israel's desire and commitment for peace. But to seek to force peace in light of hostility and hatred on the streets is neither realistic nor sustainable.

The Sharon election, I believe, can be seen as a referendum on Arafat's actions and policies, and the Palestinian violence, and it must be taken seriously by the Palestinians if the peace process is to ever get back on track.

Just last summer, the 7-year-old peace process seemed on the verge of success, but the chairman walked away from the deal at the last moment.

And I believe that if and when he does realize this, when he takes action to bring the current violence to an end, he will find that Israel remains a partner in the search for peace in the Middle East, with the United States as a facilitator.

Until then, however, the United States must be clear that we continue to stand with Israel, an historic ally and partner in the search for security and peace in the Middle East.

2102 News from Israel You May Have Missed

Myths of the Flotilla Fiasco: The Full Story

The Gaza Riviera
The Promise Of The Land
Which Chat Are You On?: Parshas Behar/Lag Ba’Omer
Do You Like Slow-Cooked Food? Thank the Jews
Comments
MOST POPULAR IN Middle East
Our privacy policy