Palestinian TV: Kill All The Jews 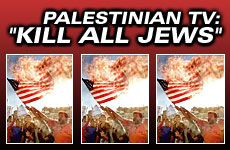 The Palestinian Authority is inciting the current wave of violence through its official media. Jews and Americans are the prime targets.

Following are excerpts from a sermon given Friday, October 13, in the Zayed bin Sultan Aal Nahyan mosque in Gaza, broadcast live on the official Palestinian Authority television. The speaker is Dr. Ahmad Abu Halabiya, Member of the PA appointed "Futwa Council" and former acting Rector of the Islamic University in Gaza:

"O brother believers, the criminals, the terrorists are the Jews, who have butchered our children, orphaned them, widowed our women and desecrated our holy places and sacred sites. They are the terrorists. They are the ones who must be butchered and killed, as Allah the Almighty said: "Fight them: Allah will torture them at your hands, and will humiliate them and will help you to overcome them, and will relieve the minds of the believers?

"O brothers in belief, this is the case of the Jews and their habitual conduct, and what happened yesterday, and has been going on for two weeks, and before that for many years, and which will be repeated in future years unless we stand up like men and unless we have the known Muslim position, [the position] of those who wage Jihad in the path of Allah, those who defend their rights and who sacrifice all that is dear to them.

"Allah has purchased from the believers their persons and their property in return for the promise that they shall have paradise, for they fight in the cause of Allah, and they slay the enemy and are slain. This is a promise that He [Allah] has made incumbent upon Himself, as set out in the Torah, and Gospel and the Koran.

"America and Europe and the world were shocked by the kidnapping of three tramps, the kidnapping of three wretched soldiers, and the killing of two in Ramallah. But their feelings were not moved, and they did not shudder when they say the children Muhammad ad-Durrah and other women, and men, and youths -- being martyred by cannons and missiles, and all the barbaric instruments and the Jews possess.

"They were moved, for the sake of five persons, and the world went into turmoil and it will not stop for Clinton or for the old hag Albright, they will not be relieved, and they will not cease to be concerned, and they will not rest until the Jews return to their families. But as for the Palestinians, as for this pure blood, it can go to Hell in the eyes of the Americans and Europe and the Jews.

"This is the truth, O Brothers in belief. From here, Allah and almighty has called upon us not to ally with the Jews or the Christians, not to like them, not to become their partners, not to support them, and not to sign agreements with them. And he who does that, is one of them, as Allah said: "O you who believe, do not take the Jews and the Christians as allies, for they are allies of one another. Who from among you takes them as allies will indeed be one of them.

"Even if an agreement of Gaza is signed -- we shall not forget Haifa, and Acre, and the Galilee, and Jaffa, and the Triangle and the Negev, and the rest of our cities and villages. It is only a matter of time. The weak will not remain forever weak, and the strong will not remain forever strong? If we are weak today? and we are not able to regain our rights, then at least we have to pass on the banner - waving high - to our children and grandchildren?

"None of the factions is allowed to stand on the sidelines at this stage, or not to think well of avenging our pure martyrs and wounded. Our people must unite in one trench, and receive armaments from the Palestinian leadership, to confront the Jews. By Allah, the Jews, O brothers in belief, do not know, nor have they ever known throughout history, anything but force and Jihad in the path of Allah. The Jews are like a [gas] pedal -- as long as you step on it with your foot, it doesn't move, but if you lift your foot from it, it hurts you and punishes you. That is the case of the Jews.

"Have no mercy on the Jews, no matter where they are, in any country. Fight them, wherever you are. Wherever you meet them, kill them. Wherever you are, kill those Jews and those Americans who are like them -- and those who stand by them - they are all in one trench, against the Arabs and the Muslims -- because they established Israel here, in the beating heart of the Arab world, in Palestine. They created it to be the outpost of their civilization -- and the vanguard of their army, and to be the sword of the West and the crusaders, hanging over the necks of the monotheists, the Muslims in these lands. They wanted the Jews to be their spearhead.

"Let us put our trust in Allah, close ranks, and unite our words, and the slogan of us all should be, 'Jihad! Jihad! For the sake of Palestine, and for the sake of Jerusalem and Al-Aqsa!'

"We will not give up a single grain of soil of Palestine, from Haifa, and Jaffa, and Acre, and Mulabbas [Petah Tikva] and Salamah, and Majdal [Ashkelon], and all the land, and Gaza, and the West Bank?

"Allah, deal with the Jews, your enemies and the enemies of Islam. Deal with the crusaders, and America, and Europe behind them, O Lord of the worlds."

Why Israel Must have Defensible Borders

Israel's Moral Right to its Life