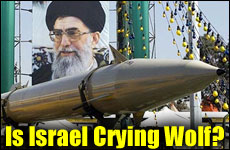 Roger Cohen should have a conversation with my daughter.

There are moments when I try to imagine what a conversation would be like between Roger Cohen, the well-traveled and sophisticated New York Times columnist who has made it his personal project, in recent weeks, to undermine Israel's case on the Iranian nuclear threat, and my youngest daughter. True, she is not an intelligence officer (I am, or rather was, once upon a time); nor is she a "bellicose" (Cohen's choice of words) Israeli general or politician. She is just a vulnerable 17-year-old with a tendency to take very seriously being told she is marked for destruction. She has often demanded to know what I have done, and what Israeli and American leaders have done recently, to make sure that she gets to be 25 -- given that she sees, in the president of Iran, Mahmoud Ahmadinejad, the embodiment of a design to have her dead.

I wish I could tell her that Mr. Cohen, a knowledgeable man, has recently been to Iran and is now in possession of a mature understanding -- which all of us here, hysterical children that we are, sorely lack -- of the mullahs' real (and relatively benign) intentions. Even better, I would have loved to let him come over for dinner and have a go at soothing her fears, which are deep and real, and shared by many in Israel, young and old alike, who are not playing strategic games; they are simply frightened. But somehow, reading his recent spate of essays, I am not sure he is up to the task. Neither am I.

Cohen's case, favoring a firm American rejection of what he describes, in effect, as Israeli manipulative tactics, rests on several foundations. They need to be taken seriously -- and addressed, one by one: that Israel is "crying wolf"; that Iran was never all that dynamically engaged in pursuit of the bomb; that the problem is Israeli hegemony, not the Iranian threat; that the Arab leaders are not really worried; that the mullahs are, in fact, rational; and that they are nice to their Jews (they were apparently nice to Mr. Cohen, in any case).

And then, if this all turns out to be wrong -- a delusional gamble with our lives and the stability of the region at stake, not to mention the future of the nonproliferation regime -- Cohen's argument is that we still have time, plenty of time, to make amends.

It is at this point that we come to the most specific and policy-oriented question: What is our margin of error when it comes to making decisions? Is it true that we still have time, anyway -- perhaps two years, perhaps more? What if we do not? The occult knowledge that, in his mind, authorizes Cohen to make such judgments is -- quite frankly -- beyond me. Huge efforts by formidable analytical agencies have bred little by way of conclusions on the matters upon which he declaims with an air of certainty.

The real question, in any case, is not how long we have before Iran has the bomb, but rather, at what point do we have to decide whether to negotiate -- with, or without, real leverage. Given that he is an ardent supporter of "engagement" with Iran, Cohen may be surprised to learn that people close to Binyamin Netanyahu are equally willing to welcome Obama's first steps in this direction. Cohen should be an avid supporter of measures that would enable the effort to succeed, rather than end in a limbo like Javier Solana's talks. To go into the engagement with Iran without proper leverage, armed only with the kind of wishful thinking Roger Cohen offers us, would be the sort of intellectually embellished folly for which nations have often paid dearly.

Why are Americans so Pro-Israel?

What If Terrorists Could Shoot Rockets at Your Country?

What Are HRW Watching?

Bikini-Brand or Holy Land?
Manischewitz Jello Mold Recipe
Jews and Jello Molds
The Blue Beyond
Comments
MOST POPULAR IN Israel
Our privacy policy

Manischewitz Jello Mold Recipe
Jews and Jello Molds
The Blue Beyond
Great Place to Live
Is Eating Supposed To Be Spiritual?
Are Jews Against Whistling?
Orphan Visiting Cemetery Before Wedding
Same Pot for Meat and Fish
Reciting Tehillim on Shabbat
Guilt Over Past Sins
1 2 3 … 2,963 Next »