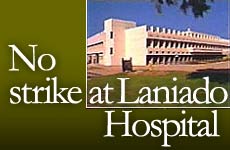 A Israeli hospital, founded on Jewish principles of kindness, has earned a reputation for the finest in patient care.

The recent 127-day doctors' strike in Israel has finally come to an end. The number of lives lost in the course of the strike is still to be tallied, and the long-term health consequences will never be known.

At Laniado Hospital in Netanya, however, the strike never began. Since its founding by the late Klausenberger Rebbe, Rabbi Yekusiel Halberstam, there has never been a strike by any hospital employee or work stoppage of any kind. Just as soldiers cannot strike in the midst of battle, Rabbi Halberstam taught, so too those involved in healing may not strike no matter how legitimate their grievances.

During the Holocaust, Rabbi Halberstam traversed every level of Hell -- Auschwitz, ruins of the Warsaw Ghetto, work camps, and death marches. In the course of that journey, which claimed his wife and their 11 children, he vowed that if he survived he would build a monument to chesed (kindness) that would stand in the starkest possible contrast to the inhumanity of German "men of culture and science."

Laniado is that monument. It took Rabbi Halberstam 15 years to raise the money to build the hospital. His mission was to show the world a Jewish approach to healing and that the highest medical standards are fully consistent with the highest standards of Jewish law and tradition.

In a speech to the entire staff of the hospital upon its opening, Rabbi Halberstam said, "Our Torah is a Torah of lovingkindness. Everyone can understand that a rabbi, and indeed every believing Jew, wishes to establish Torah institutions. Everyone should therefore understand why a rabbi established this hospital, which is, in fact, a magnificent Torah institution."

Building a hospital was another aspect of teaching Torah in Rabbi Halberstam's eyes. (He later founded Mifal HaShas -- "The Talmud Factory" -- under whose auspicies thousands of scholars are tested on between 20 to 70 folios of Talmud every month.)

Rabbi Halberstam succeeded in creating the Torah institution he had envisioned. The rabbi of the hospital, Rabbi Chaim Yaakov Schwartz, is involved in every aspect of medical care -- not just giving instructions on heating water on Shabbat. He meets frequently with every department head to discuss questions of Jewish law, and is a constant presence on the wards. In the nearly quarter century of Laniado's existence, he has not taken a single day of vacation.

The average hospital Laniado's size has six respirators. Laniado has 25 so that no doctor ever has to set priorities in the allocation of respirators. Once a patient was unconscious and believed brain dead on a respirator for 55 days following a near drowning. Today he is alive and well.

Most important is the attitude to healing with which Rabbi Halberstam imbued the staff. In his opening speech he pronounced the most vital quality for the staff as "a warm Jewish heart." The protocols of the hospital, drafted by Rabbi Halberstam, specify that employees should be "full of love for their fellow Jews and every other human being."

Rabbi Halberstam told the staff that their goal must always be "to cure the patient not just cure the disease," and he insisted that concern with their pain was crucial to that task. Asked which of two types of syringe needles the hospital should purchase -- one that was slightly less painful or one that was half the price -- he immediately ordered the more expensive needles.

Dr. Andre deFreis, the former director-general of Beilenson Hospital, later served at Laniado. He described the difference in Laniado: "Here I feel I'm a healer. There is a feeling of being involved in holy work." He told a medical conference, "At Laniado, I learned that the patient is a person."

A man once came to Rabbi Halberstam in America to thank him for saving his life. He had been in critical condition in a hospital for several days, and two young nurses did not leave his side during that entire period. They explained their dedication: "We are graduates of Laniado nursing school. And we once heard Rabbi Halberstam speak on the merit of saving lives. We felt that with constant attention we could save you."

One Rosh Hashana, a woman began to hemorrhage badly during child birth. She needed a massive transfusion of a rare blood type immediately. An order went out that every student in the adjacent yeshiva should immediately rush to the hospital to have their blood type tested. Prayers were stopped in the middle of Rosh Hashana. The women's sister, herself a nurse, told the staff later, "There is no other hospital where she would still be alive today."

Rabbi Halberstam told the nursing school students that if they ever heard of a woman contemplating an abortion, they should tell her that Rabbi Halberstam would raise the child as his own. One woman, convinced by a nursing school student in this fashion to carry to term a baby she had been told would be deformed, delivered a perfectly healthy baby.

Rabbi Halberstam once explained why there have never been any socio-political demonstrations in his neighborhood of Netanya. "When you come to a place of darkness, you do not chase out the darkness with a broom. You light a candle."

I Am Alive: An Inspiring Jewish Music Video

The Heroine in Everywoman
Don’t Believe in Other Gods Versus God is One
Seeing Without Eyes
Why Shouldn’t We Eat Whatever We Want?
Comments
MOST POPULAR IN Israel
Our privacy policy
Aish.com Is Looking for Great Writers