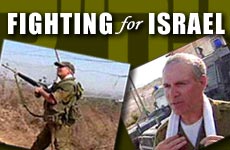 Every year Alan Leventen takes a break from his senior executive position in NYC and serves in the Israeli army, risking his life in the war against terror. What makes this man tick?

Although I'm a busy executive on Wall Street, I took time off in July 2002 to fly to Israel and serve as a volunteer with the border police. For 12 days, myself and 11 other volunteers were posted overlooking the West Bank town of Jenin, the spot where, in the last year and a half, at least 24 suicide bombers have crossed into Israel.

All day long, I wore army-issue fatigues, a flak vest, carried a full pack and an M-16 assault rifle, and patrolled cotton fields on the lookout for Palestinians crossing into Israel illegally.

They put me on the front line because I'm pushy, and I had army experience. I had served as a paratrooper in the Israeli Army 30 years earlier. In fact, when I finished high school, I didn't go to graduation exercises. I went straight to Israel to serve in the army. How did that all come about?

I was a hyperactive child who attended the Detroit public schools. In the '50s and early '60s most educational systems did not know how to deal with attention deficit, hyperactive, or dyslexic children. In my case, I was known as being smart and athletic. But the stigma associated with the hyperactivity had consequences. I got shifted around -- to a private school, and then to a military school in Indiana.

My parents didn't know it, but this was a parochial military school, which meant that they marched us in ranks to church every day -- an hour before lunch and two hours on Sunday. After a few months of this, I began speaking out in class and asking the priest some uncomfortable questions. This caused a negative reaction, even from the friends I managed to have because I was a good athlete. They'd gather around my room and call me dirty Jew, Christ killer and similar names.

To make a long story short, I was sent back to the Detroit public schools. I spent my free time studying Jewish history. I would read almost any book I could get my hands on and I would ask my father a lot of questions. During the Six Day War, all of us became very concerned about whether or not Israel was going to survive. With the stunning victory, my Jewish pride came out and the pace of my interest picked up even more. I made a decision, at the age of 14, that after high school I was going to Israel to serve in the IDF.

It turned out to be a great experience. I served for three years and have never regretted it.

My "military career" lay dormant for 30 years, and then on September 11, I heard the first plane slam into the World Trade Center from my office on the 40th floor of a nearby building.

After hustling my wife, who works with me, and several colleagues out of the building, I headed toward the Twin Towers, thinking I might be able to use my medic training from the Israeli paratroopers.

I didn't know it at the time, but one of my closest friends and colleagues was having breakfast in Windows on the World, on top of the north tower, and died when it collapsed.

I decided that I wouldn't attend any more funerals without being able to say that I did everything I can to stop this from ever happening again.

You can go along in life feeling like a victim, or you can take active steps to reverse the evil.

9/11 brought home the issue that this is a global war on terror. It's not just Israel's war; it's a war between two civilizations, two cultures, two different belief systems. When I came this summer to fight for Israel, I was also fighting for my wife, colleagues and fellow citizens in New York. Whether you fight them in Afghanistan or in Jenin, it doesn't matter. The difference is that as a Jew it's much more poignant for me to fight the terror in Israel.

I feel I'm making a contribution, not out of hatred or vengeance, but out of love.

Initially the Israelis were skeptical about having an American executive in their unit. But eventually they saw I was a very good soldier. I may not be able to run as fast or as far as I once did, but my shooting is outstanding (thanks to military school) and I also have "predator's eyesight" -- I can see movement at a distance. It's crucial to be constantly alert in this type of environment. We're dealing with human beings, yet at the same time, someone could blow himself up in your face.

I went on an operation in Jenin to snatch a terrorist. The guy we were after was a paymaster with a briefcase full of pay slips for the families of suicide bombers. It was a very professional operation and it was very exciting. At the time, the 28-year-old assistant commanding officer of our unit didn't know anything about me other than the fact I was a volunteer.

After the operation, an article was published about me in the New York Daily News. A few days later the officer said, "Aren't you the guy who was in my operation? I read about you. I was very touched when you talked about 9/11. You said that you go around with a constant sensation of having been kicked in the stomach. Let me share something with you. Do you remember in early June the bus bombing at Meggido Junction? At the back of the bus were a number of people who didn't die from the bomb, but the fuel tanks caught on fire and they burned to death. There was one young couple who, in the process of being immolated, died embracing one another. I witnessed the whole thing before my very eyes and we couldn't do anything for these people. When you described the sensation of constantly being kicked in the stomach, that's exactly how I feel."

Here was the commanding officer, and me -- his rifleman. He's almost half my age. But at that moment we were more than just comrades. We connected on a level that transcended time and space. We were committed to fighting this battle together.

To me, success doesn't mean having a lot of money or fancy titles. In terms of financial resources, I do okay and live reasonably well. But I'm much more concerned about who I am as a person and whether I'm doing everything I can to improve on that.

I start with the assumption that I am deeply flawed. If you accept that premise, and you care about your life and want to bring value to yourself, then you do everything you can to improve. That means responding to the world and its challenges in a way that you can be proud of, even though it may be difficult.

If you've ever had the experience of looking in the face of someone who is hardcore Islamic Jihad or Hamas, you know they are not of this world. And once you've seen that, you realize that you can't negotiate with evil. There's only one thing you can do. You have to cut it out just like you'd cut out a cancerous mass from a human body -- or the whole body dies.

This is a heavy time in the world. People have to make a choice which passport to travel on -- are you traveling as a child of light, or as a child of darkness?

The Jewish people represent something very deep and important to the world, which is why the world cares so much about what we do. The Jewish people can make a huge difference in this world if we carry out our mission. God will not allow us to rest and become like every other nation. Israel will only be allowed to rest when it accomplishes its vision of being a light unto the nations.

I believe that success ultimately comes from one's sense of self-esteem, and that comes from strength of moral character. How many people do you know who are truly willing to stand up, and not just give lip service, to principles they believe in? I try to ask myself: Do I help my fellow man when he needs me? Am I courageous or am I a coward? And if I'm a coward, do I recognize it and try to overcome it?

I'm trying to balance my personal and business life. I admit that patrolling the Israeli border is an extremely odd way of doing it. It's hot, hard work. But I do it because it's bigger than the welfare of my family or myself. It's gives my life added value.

And I plan to come back at least twice a year for the next few years -- as long as my knees hold out.

The Jewish Ethicist: Bottom of the Barrel
Why My Iranian Mother Didn’t Want Me to Become a Religious Fanatic
The Jewish History of Prague
Why the Sexual Revolution was Bad for Women
Comments
MOST POPULAR IN Current Issues
Our privacy policy
Aish.com Is Looking for Great Writers