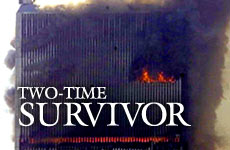 Norma survived both attacks on the World Trade Center and she believes she knows why.

An excerpt from the new best seller, City On Fire.

Blank spaces stare back at Norma as she strains her eyes on the Manhattan skyline from her balcony in Rockaway Beach. One of them, One World Trade Center, was her workplace. Having emerged unscathed from that building twice in eight years, hers is not only a story of the Twin Towers but of twin survivals.

Recounting the miracles from her tenth-floor apartment one recent afternoon, her gaze was fixed on a small, frail girl sitting in a wheelchair in the center of her living room. She believes it was surely to care for her nine-year-old grandchild Danielle, who herself had virtually risen from the grave, that she stared down death twice.

Pronounced dead on arrival at the hospital, the child was finally resuscitated but remained permanently brain damaged.

It happened in the summer of 1996. Norma received word that Danielle, who had been wading in the children's pool, had drowned. Pronounced dead on arrival at the hospital, the child was finally resuscitated but remained permanently brain damaged. Her mother, Norma's daughter, had recently remarried, and the responsibility for caring for the child, who would no longer speak or walk and would require diapering and feeding through a gastric tube, rested with Norma.

"I truly believe that the reason I remained alive was to help my daughter look after Danielle. She may be nine, but she's like an eight-month-old baby. It's an arduous task, and it would have been too much for my daughter to handle," she says.

On September 11, Norma, a fifty-six-year-old public information officer for the New York Metropolitan Transportation Council, was sitting at her desk on the eighty-second floor when she heard a thunderous jolt.

"We looked out the window and saw a fireball and debris raining down. The building did not shake. It tilted momentarily and sprang back as if bowing its head to us and saying, 'I'm giving you a chance to get out. Do it now!'"

Someone in the office, whom Norma refers to as one of the angels who saved her, issued a clarion call to evacuate. "Get out! Get out now!" he screamed. After a mass exodus from the office, she and about twenty-five coworkers embarked on a one-hour trek down the narrow staircase single file. Three stayed behind.

"One was running around answering the phones. Another had hurt his leg and was waiting for the rescue workers. The third was probably working in his office. We found out later that we lost them."

On her way out, Norma decided to return to the office to retrieve her handbag, which contained $650. Though the halls were enfolded with black smoke, she groped her way back to the stairwell in the dark.

"An angel must have been preparing me for what lie ahead."

Normally she would not have been able to navigate the eighty-two flights due to her arthritic knees. But luck had it that the night before, when throbbing pain robbed her of sleep, she wrapped her knees in magnets and awoke the next morning pain-free and euphoric.

"I was so happy. I just couldn't believe I could flex my knees. An angel must have been preparing me for what lie ahead."

"As we walked down," she continues, "we were joking and laughing. We didn't know the severity of what happened. When we got about midway, we found out that a hijacked jet liner had plunged into the ninety-sixth floor of our building. A few young ladies were getting hysterical. I took one by the shoulder and said, ‘‘Take a deep breath and calm down. I've been through this before, and this is a piece of cake compared to last time. Just take it easy, and we'll all be okay."

As they were descending the steps, young firefighters, some breathless or on the verge of collapse, were ascending armed with heavy equipment.

"Some were radioing for help. Others were opening doors to go into offices and wait for help. Such young kids, I thought. Then I began to feel exhausted. A fireman offered me water, but I said, 'No, thank you. Keep the water. I'm leaving, but you're just arriving. You'll be needing it more than I.' I wished him luck. I'll never forget those young eyes that looked into mine and said, ‘Thank you, miss.'"

When she reached the concourse, water from the sprinkler system was gushing in every direction, and it was slippery underfoot.

Someone was shouting, "Hurry up! Do not look to the left!" But like the biblical wife of Lot escaping a burning Sodom, Norma did look, and she feels what she saw will haunt her forever after.

"I saw the severed head of a white male, with no shoulders or neck, just sitting straight up, looking at me, two burned legs in burned sneakers, a fully dressed torso, and chunks of body parts strewn all over the place. I began to scream. The EMS tagged me around my neck and dragged me across the street. They wanted to give me oxygen.

"I had only been out of the building about ten minutes when suddenly I heard this low, rumbling sound. When I looked around, the building was coming down. It looked like a huge cloud of crushed-up cement, like a big ball of dirt."

People were shrieking and running and trampling one another.

Observing a man pressing his body against the side entrance of a hotel, she did the same. Then there was utter darkness and silence. She felt as if pulverized glass was cutting her throat. Her eyes and skin were burning from the falling debris. She waited.

"The man said to me, ‘Lady, give me your hand, and don't let go!' I took his hand, and he pulled me for three or four blocks. We came to an abandoned cart. He passed me some juice and water and told me to wash my eyes and drink. He pointed me to a hospital and then turned his back and walked away. That was an angel sent to save me."

"People just couldn't believe I got out of the building alive."

In the hospital ladies' room, Norma doused her head in the sink, washed her jacket and dress, and put them back on again, wet. Wandering through the hallways, she encountered two coworkers. They hugged one another, cried, and shared their stories, then decided to head home. When they reached the edge of the Brooklyn Bridge by foot, an emergency vehicle picked them up and hauled them across. Then a special bus brought them to Brighton Beach. It was close to 3 p.m. when her cell phone finally allowed her to dial out. She learned that her son had left his job in Brooklyn in search of her. Someone took pity and delivered her to Rockaway Beach, where she was reunited with her family.

"People just couldn't believe I got out of the building alive, considering I was pretty much disabled because of my knees. The angels looked after me," she says with a smile.

Although the recent attack was of greater magnitude than that of 1993, Norma says this time her escape was much easier. But both times she was "assisted by angels."

"At least we had light this time, and there was no smoke in the staircase, but in 1993 we felt our way down in pitch darkness and in a cloud of smoke. Every now and then someone flicked a cigarette lighter or struck a match, but for the most part it was totally black. If not for those angels, I would never have lived through either attack."

She was one of the ten in her office who survived both attacks. Norma shifts her glance to Danielle, who is laughing and crying at once. Both seem happy for the miracles but saddened that life will never be the same for either one.

A resident of Brooklyn, New York, Sorah Shapiro is a journalist who writes for major secular and Jewish publications, with a kaleidoscopic background in law, advertising, psychology, education, Judaic studies, graphic arts, and music. Supplementing her full-time career, she employed her talents to facilitate the integration of Jewish immigrants from the former Soviet Union and has been honored for her volunteerism in medical institutions. She is a frequent speaker at women’s groups in New York and adjacent states on a wide variety of Jewish and secular topics.

The Jewish Ethicist: Charity and Providence