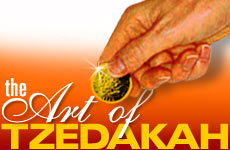 Judaism has developed a game plan for giving that is part artform, part science and all good sense.

When Goldberg the beggar came to Rothstein for his monthly handout, he was in for a shock. "I have nothing for you this week," Rothstein said apologetically, and began explaining his plight. Business, he said, had been terrible and he'd been saddled with a number of unexpected personal expenses. None of this, however, impressed Goldberg, who threw up his hands and cried: "Because things are rough for you, I have to suffer?"

Goldberg is not your average beggar. He's that Jewish archetype known as the shnorrer, a chutzpadik sort who actually feels entitled to a share of his donor's money. And why not? He's providing a service. Goldberg is doing Rothstein a favor by giving him the opportunity to perform the mitzvah of tzedakah, or charitable giving.

Goldberg may be audacious and overbearing, but he's tapped into something profound -- Judaism's take on the whole notion of providing for the needy. For starters, we don't regard philanthropy as an option, but as a holy duty. This obligation is considered so important, in fact, that all people are expected to fulfill it, even those who themselves are receiving charity. One of our ancient sages was so blown away by the concept that he declared charity to be equal in importance to all the other commandments combined. Even the language we use for giving bespeaks its distinctiveness and potency. In Hebrew, the word tzedakah is tied linguistically to the word for justice.

So it's important. But why? Here's an illustration: Your work on the XYZ account was so masterful that it earned you a very tasty bonus, not to mention the admiration and envy of most of the eighth floor. You rule.

Not to take any credit away from you, but . . . let's do precisely that. Let's spread it around and give some recognition where it's due -- with God, for example. He provided the raw materials and you made the most of them. This is called Thinking Jewish 101. Philosophers call it self-transcendence, or coloring outside the "me" box, an approach that can trigger a whole cascade of neat things.

Tzedakah transforms your money into a leveraged commodity -- a spiritual currency that makes it possible to do good by doing well.

It might, for example, cast your monetary windfall in an entirely new light. You might see it as a gift from God, who is now depending on you to do the right thing with it. That would make you a trustee, which would link you with a whole community of needs. Through tzedakah, your pot of money would be transformed from high-test ego fuel into a more diversified and leveraged commodity -- a spiritual currency that makes it possible to do good by doing well.

That's nice, but how exactly to dispose of that bonus -- aside from buying a Ford Explorer? Judaism has developed a game plan for giving, a time-tested hierarchy, that is part artform, part science and all good sense.

To begin with, you'd strive for being a mensch by giving cheerfully and compassionately and not grudgingly. Why rub salt in an already deep wound? And if that doesn't help unhinge your wallet, you might do an impromptu scan of your personal budget. Compare your charitable deductions with all the money you spend on non-essentials such as vacations, travel and the innumerable consumer delectables that adorn your home entertainment center.

As a righteous Jewish giver, you'd also seek to preserve the recipient's anonymity, and thus maintain his or her dignity and self-respect. Ideally, this would mean the recipient does not know who gave the money and you would not know who received it. One way to achieve this is by contributing to a community fund -- but only one, our tradition cautions, that is trustworthy and well-managed.

The highest degree of charity seeks to eliminate the root cause of neediness.

The highest degree of charity seeks to eliminate the root cause of neediness rather than simply alleviate symptoms. This would entail, for example, offering the recipient a loan or making him a business partner or otherwise helping him become self-sufficient and less dependent on, in Tennessee Williams' words, "the kindness of strangers."

In keeping with this theme, Judaism urges the recipients to steer clear of charitable dependency by shaving expenses and taking whatever work is available. In fact, our tradition is rich (no pun intended) with stories of great but impoverished rabbis working at menial jobs in order to avoid going on the dole.
Had hard times overtaken them, however, they could rest assured that the Jewish safety net known as tzedakah would be there to cushion their fall. Here's to the weavers of that net, those generous Jews throughout the ages whose money does indeed talk. It just happens to speak a different language.

The Jewish Ethicist: The Office Pool

The Jewish Ethicist: Borderline Poor
The Grand Mufti of Jerusalem and the Holocaust
The Connection between Israel and the Jewish People
Grit and Torah
Comments
MOST POPULAR IN Current Issues
Our privacy policy