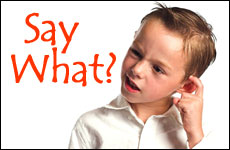 Do the things we tell our kids even make sense? Short answer: no.

I was in the supermarket the other day, and I overheard a child asking his mother for just about every kind of candy near the register. After the mother shot down several choices, the boy pulled one last bar off the shelf.

“Mommy! MOMMY! Is this one kosher?”

“Ooo, Mommy! Mommy! MOMMY! Is this one kosher?”

“No,” the mommy snapped.

I probably don’t need to tell you that we were actually standing in a kosher supermarket. Apparently, everything in the whole store is kosher except for the candy that they keep near the register. I’m not judging. What this mother did was a lot easier than explaining the real reason she didn’t want to buy it for him, with a bunch of impatient people waiting behind her:

And it’s not like none of us ever stretches the truth with our kids. We’re not proud of it, but we tell ourselves that it’s just easier this way.

For example, a lot of people tell their kids that coffee stunts their growth. In fact, parents have been telling this to kids for generations, and our society has come to believe that it’s true. But there’s no research that proves it. Nevertheless, parents say it anyway, because they don’t want their children drinking coffee, the reason being that parents drink coffee in the first place so they can keep up with their kids. They don’t even want to think about how much coffee they’re going to have to drink if their kids started drinking coffee too. But this isn’t really something we want to explain to our kids, so we play on the fact that they want to grow big and strong, and combine that with our mutual lack of scientific knowledge.

“If you swallow the seeds, you’re going to have a watermelon growing in your stomach.”

This is also why we tell them that if they eat their vegetables, they’re going to grow up to be big and strong. Is this true? Doesn’t that have more to do with genetics and exercise? And even if they don’t eat any vegetables, chances are they’ll still grow up to be bigger and stronger than they are now. In fact, you’re not really sure what vegetables do. You yourself eat them so you won’t grow bigger. Are they magic? All you know is that your doctor keeps telling you to eat vegetables, so you eat vegetables.

There are many other things that we tell our kids that are not necessarily as true as they could be, such as, “I’m not going to say this again.” But the biggest is what we say when we’re trying to discourage our kids from lying:

No, you’ll get even. Most of us have had this conversation with our parents at some point:

“Aren’t you going to go easier on me for telling the truth?”

“Not after what you did!”

(Seriously, you’ve never told your child before that he couldn’t lick the floor. How was he supposed to know?)

There are also a lot of things that we say to our kids that, upon closer examination, don’t quite make sense:

“What part of “Don’t hit your brother” don’t you understand?

We’d always hoped we’d never have to say any of these clichéd parental things, but now we feel like it’s all we ever say:

“Close your mouth and eat your food.”

“How would you like it if I spit in your soda?”

“Your shirt is not a napkin.”

“Why do you always get boo-boos after your bedtime?”

“Don’t eat ketchup with your fingers. At least use a spoon.”

“No, you’re not old enough to pour milk.”

“How do you know you don’t like it if you haven’t even tried it?”

“Don’t just stand there crying! Clean it up!”

“I said don’t lick the floor!”

I find myself counting to three way more often than any healthy person should.

I find myself counting to three way more often than any healthy person should. For a while, my son Heshy wasn’t even sure what number came after three. We’d watch him count his toys: “One, two, three, five, seven, fourteen, fourteen, fifteen…” So we started counting to ten. And it’s not like this really gave him more time anyway, because when we count to three, we stretch it out as long as we can. (I’m surprised he wasn’t counting: “One, two… two-and-a-half… two-and-three-quarters…”) To this day, my kids have no idea what’s going to happen when we get to three, but they have no desire to find out. Neither do I, because I’m pretty sure it will involve getting up.

I don’t know if I have a point. I guess my point is that our kids keep blindsiding us with questions and requests every minute of the day, and we don’t always have time to weigh all of our options. So we say whatever we can to try to turn them into decent human beings, and to get it over with before the next kid blindsides us with something.

But don’t worry. As you tell your kids, you’re the parent, and everything you do hurts you more than it hurts them (maybe you should eat more vegetables), and someday, they’re going to thank you for this.

Really? That’s going to be an awkward conversation.

How Jews Get Their Kids into College

I’m a Mitzvah Clown!
The Blue Beyond
Great Place to Live
Is Eating Supposed To Be Spiritual?
Comments
MOST POPULAR IN Jewlarious
Our privacy policy